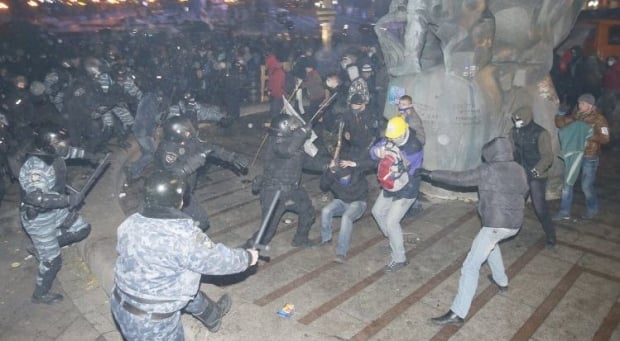 "Basically, [the authors of the plan] were Zakharchenko and Yakymenko. We had information that Oleksandr Yanukovych – Viktor Yanukovych’s elder son – was working on this plan along with them. But, in fact, that those two plus a commander of the Internal Troops [of the Interior Ministry] were the ones who were responsible before Yanukovych for the carnage on the Maidan," Turchynov said.

Read alsoContracted soldier detained in Odesa before heading to Kyiv’s Maidan with 12 Kalashnikov rifles (photo)At the same time, responding to a question on who ordered the protesters to attack, because it was clear that for many it would be the last one, Turchynov said that "it was a personal heroic impulse of the Maidan defenders.”

“Nobody could give the command to go and meet their deaths. The Maidan by that time was living its own life and did not need any headquarters or any decisions of the opposition leaders," said the NSDC secretary.

Read alsoYanukovych dreams of returning to Ukraine to do "something good"Turchynov also noted that no negotiations were held with Viktor Yanukovych after February 18, 2014.

"There was no sense to hold such negotiations. They failed to seize the Maidan overnight February 19, and it became clear that it was a breaking point, that was our victory, which completely changed the balance of power. They cannot beat us! Already in the morning, people started arriving from the regions, and those living in Kyiv were also coming in. Everyone was in the mood to win. A little more effort, and the regime will fall," said Turchynov told.