Parliaments of Ukraine, Georgia and Moldova start unification into Assembly

The platform should provide a wide range of new opportunities for cooperation and interaction between the three countries, Verkhovna Rada Chairman Andriy Parubiy said. 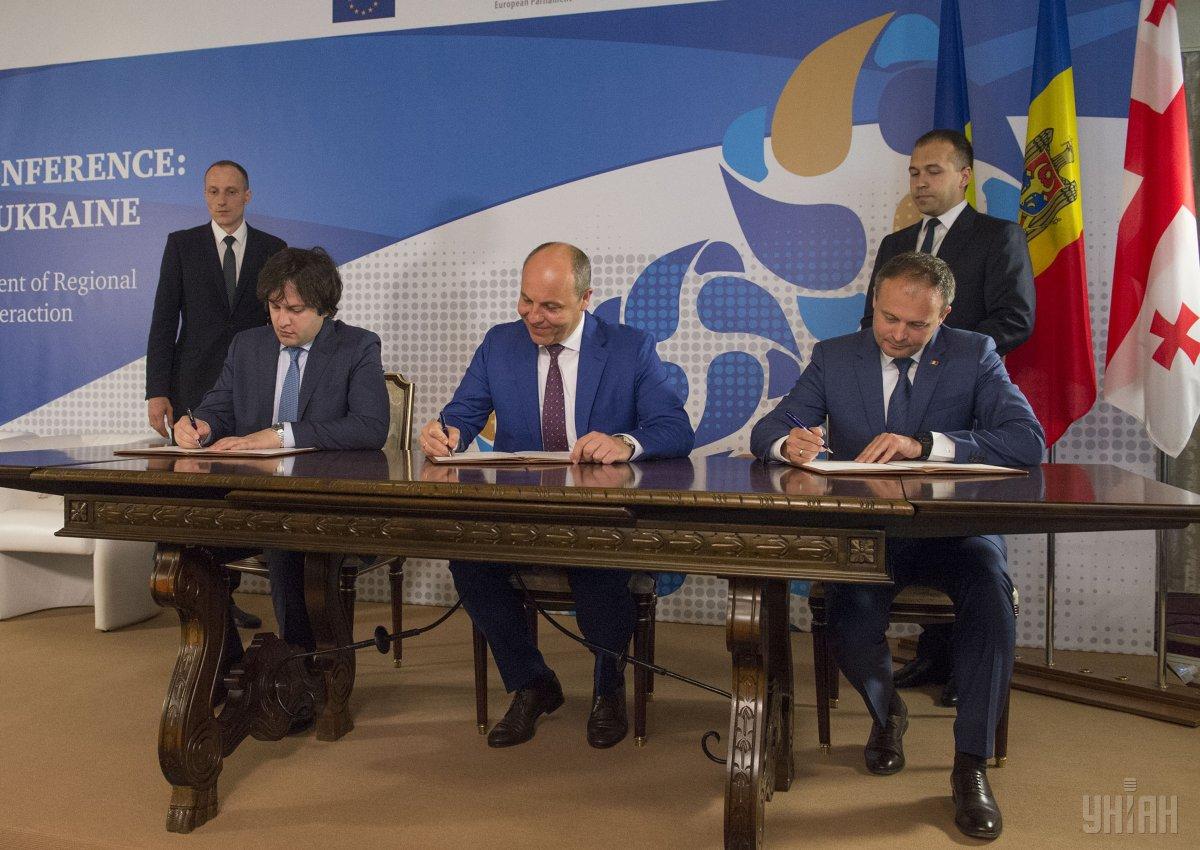 Speaker of Ukrainian Parliament Andriy Parubiy, his Georgian counterpart Irakli Kobahidze and that from Moldova, Andrian Candu, on Saturday signed off a statement on the establishment of the Interparliamentary Assembly.

The signing ceremony took place in Kyiv within the framework of the Second Inter-Parliamentary Conference "Georgia, Moldova and Ukraine: Strengthening the Interparliamentary Component of Regional and Security Cooperation, While Developing Interaction with the EU and NATO," according to an UNIAN correspondent.

In a statement voiced before the signing, Parubiy said that today the heads of the parliaments declare their intention and proclaim the creation of the Interparliamentary Assembly. At the same time, he noted, the setting up of the Assembly is not a one-stage move, because this decision has yet to be approved by the working groups elected by each parliament.

He opined that the platform would provide a wide range of new opportunities for cooperation and interaction between the three countries.

According to the chairman of the Verkhovna Rada, he dreams that one day a joint meeting of the these two Assemblies will take place, which will demonstrate that "the Baltic-Black Sea belt is Europe's shield which today defends values and protects the entire civilized world."

In turn, Irakli Kobahidze and Andrian Candu, stressed the common security challenges their countries are facing together with Ukraine.

"There is a historic event today. We've just signed a declaration on the establishment of an interparliamentary assembly between Georgia, Moldova and Ukraine," Kobakhidze said, adding that the three countries have much in common.

According to Kobakhidze, the creation of the Assembly will promote deeper cooperation between the states in many areas.

"Our three countries have much in common in the historical plane, but today they face a common fight against the common aggressor, and today we are announcing serious intentions to deepen cooperation and continue cooperation in many areas," the head of the Georgian parliament said.

"It is very important for our countries to exchange experience, knowledge, to seek solutions that would be useful not only for one country, but for all countries together," he said.

Candu also stressed that the three countries are facing a common threat.

The Chairman of the Moldovan Parliament expressed the opinion that coordinating efforts against common challenges and threats could help resolve a number of pressing issues.

If you see a spelling error on our site, select it and press Ctrl+Enter
Tags:UkraineRussianAggressionParubiyGeorgiaMoldovaParliamentassembly