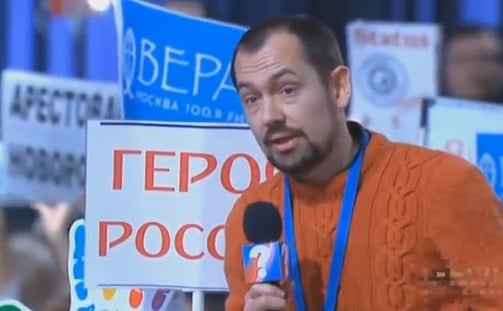 Putin asked the audience to calm down and let the Ukrainian journalist finish his question.

Tsymbaliuk addressed the issue of Russian military presence in the east of Ukraine and the overall position of the Russian president on Donbas.

"Don't you want to arrange an exchange of captured Russians for those who are arrested and imprisoned in Russia?" the UNIAN correspondent asked.

Read alsoPutin recognizes presence of "certain military, militia" formations in Donbas, talks about "massacre"Such statements by Tsymbaliuk caused indignation among the audience that included representatives of Russian propaganda media outlets: "This is not a question, it's a provocation!"

Tsymbaliuk has also asked Putin whether he will retain the same “absurd” position on peacekeepers in Donbas if he wins the elections.

“In practice, your people, those who ‘resolve issues’ there, massacre the Donbas population..." said Tsymbaliuk.

If you see a spelling error on our site, select it and press Ctrl+Enter
Tags:RussiaDonbasUkrainePutinhybridwar