The number of Russian troops on the occupied peninsula has tripled. 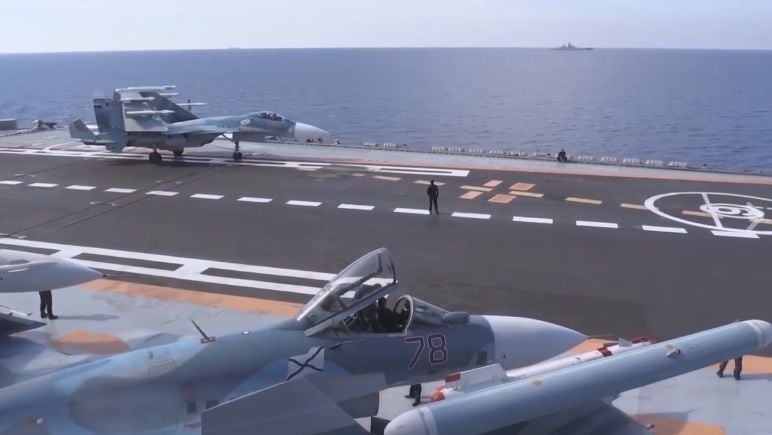 A Russian military build-up under way in occupied Crimea / Screenshot

Speaking in an interview with TV journalists on Tuesday evening, he also noted a sharp increase in the number of Russian warships in the Sea of Azov, an UNIAN correspondent said.

"We see that Russian ships are stationed throughout the entire water area in the Sea of Azov, but particular concentration is seen in the Kerch Strait area. That is – they knew, they were getting ready. These were targeted actions, with engagement of necessary aviation, electronic warfare, assault forces, special forces," the president commented on a recent incident when Ukrainian boats were attacked and captured by Russian forces near the Kerch Strait in the Black Sea.

Poroshenko also provided certain statistics about troops Russia deployed in Crimea from October 2014 to October 2018. "The number of soldiers has tripled, the number of armored personnel carriers has grown by five times, that of artillery systems by almost 10 times, aircraft, multiple rocket launchers, ships by at least five to ten times. The build-up is still under way now," the president stressed.

As UNIAN reported, three Ukrainian vessels were captured on November 25 by Russian forces at sea near the Kerch Strait, which is the only outlet to the Sea of Azov and controls access to two major Ukrainian ports. The two Ukrainian artillery boats and a tugboat were heading from Odesa on the Black Sea to Mariupol on the Sea of Azov.

If you see a spelling error on our site, select it and press Ctrl+Enter
Tags:RussianAggressionmilitaryoccupiedCrimeaPresident Poroshenko