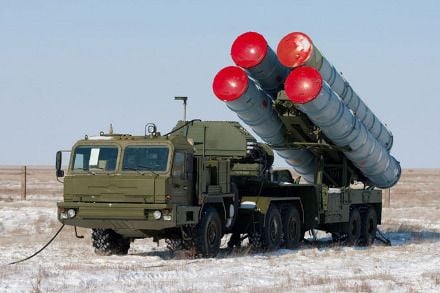 "This year, we have completed rearming air defense units stationed in Crimea with the S-400 Triumf systems. Today they are on combat duty, reliably protecting the airspace over the entire Crimean peninsula," Commander of Russia's Southern Military District Colonel-General Alexander Dvornikov said at the Defense Ministry's year-end board meeting on Tuesday, the Russian news agency TASS wrote.

For the purposes of neutralizing possible threats, the troops of the Southern Military District continued accomplishing their combat duty tasks to ensure air defense of Russia's southern frontiers and protect its allies in the airspace in the troops' entire zone of responsibility, he said.

Russia's S-400 Triumf is the latest long-range surface-to-air missile system that went into service in 2007. It is designed to destroy aircraft, cruise and ballistic missiles, including medium-range missiles, and can also be used against ground installations.

If you see a spelling error on our site, select it and press Ctrl+Enter
Tags:RussiaCrimeamissileairdefensesystemS400