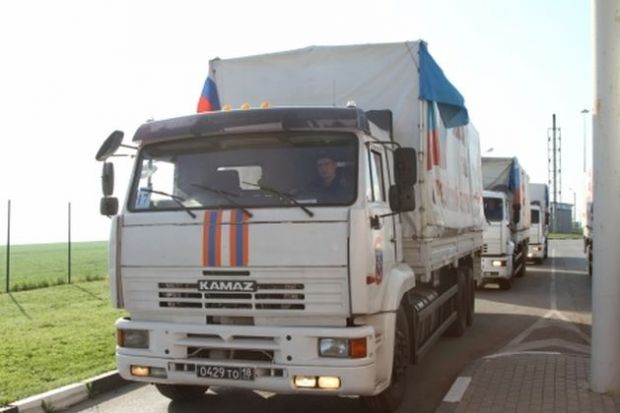 According to the report, the route to the checkpoints passed without delays and unforeseen situations.

The convoy was divided into two parts en route.

It is noted that more than 40 trucks with humanitarian cargo with a total weight of more than 440 tonnes continued moving to Donetsk and Luhansk regions. The bulk of the cargo is allegedly food, medication, and fire-technical equipment.

At the same time, according to the Ukrainian Border Guard Service spokesman Oleh Slobodian, another Russian "humanitarian convoy" was half-empty.

"This morning, the Russian Federation has unilaterally carried out clearance of the so-called "humanitarian convoy." The Ukrainian interdepartmental group did not perform any control functions, and only observed the clearance procedures visually. A characteristic feature of this convoy was the fact that the trucks had arrived half-empty, again. This once again confirms the declarative nature of this "humanitarian convoy" and the populism of this move," he said.

As UNIAN reported earlier, the Ukrainian side has repeatedly stressed that all cargo coming from Russia in such convoys, which Moscow calls "humanitarian," entered the territory of Ukraine illegally, without the government consent, in violation of national laws and internationally accepted practices.