There were at least a dozen Ukrainian political and business figures who made their way to Washington, D.C., for the inauguration, several of whom attended the Liberty Ball. 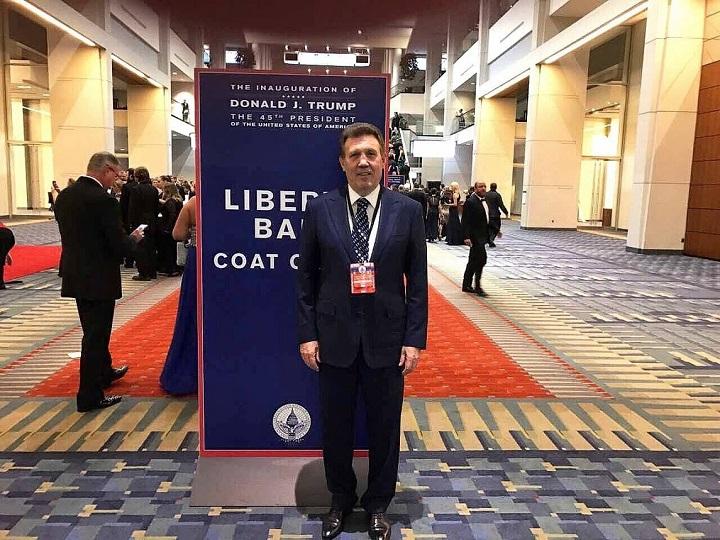 Kivalov was among those Ukrainians who attended the Liberty Ball / Photo from facebook.com/s.kivalov/photos

"Evidence of the Ukrainians' presence eventually prompted interest from the special counsel, Robert S. Mueller III, as he investigated Russian interference in the 2016 election, and has spawned a number of related inquiries by federal prosecutors," The New York Times said in its article titled "Prosecutors Examining Ukrainians Who Flocked to Trump Inaugural," which was published on January 10. "The investigations are playing out against growing indications that some of the Ukrainians who came to Washington for the inaugural, or their allies, were promoting grand bargains, or 'peace' plans, that aligned with Russia's interests, including by lifting sanctions."

Such a deal would not just have given the new administration additional flexibility to bring Moscow into American diplomatic efforts in the Middle East, but could also have eased the way for a cast of characters with ties to Mr. Trump — some of whom in turn had ties to the Ukrainians who came to Washington — to move ahead on business deals that had been complicated by the sanctions.

According to The New York Times, there were at least a dozen Ukrainian political and business figures who made their way to Washington for the inauguration, several of whom attended the Liberty Ball. "Most had more on their dance cards than just parties," it said.

They attended meetings and orchestrated encounters at Trump International Hotel with influential Republican members of Congress and close allies of President Trump. Representing a range of views, including a contingent seen as sympathetic to Moscow, they positioned themselves as brokers who could help solve one of the thorniest foreign policy problems facing the new administration — the ugly military stalemate between Russia and Ukraine and the tough sanctions imposed on Moscow following its seizure of Crimea.

Federal prosecutors have asked witnesses about how some of the Ukrainians gained access to inauguration events, whom they met with while they were in the United States, and what they discussed — including questions about various peace plan proposals — according to people with direct knowledge of the questions and others who were briefed on the interviews.

As recently as last month, prosecutors were asking witnesses about illegal foreign lobbying related to Ukraine. Another subject of questions has been whether foreigners from Ukraine and other countries used straw donors to disguise donations to the inaugural committee. Federal law prohibits foreigners from contributing to an inaugural committee, although they can attend events if Americans buy the tickets.

Elements of the investigations have gotten new visibility in recent weeks.

Lawyers for Paul Manafort, the former Trump campaign chairman who was paid tens of millions of dollars over the last dozen years by Russia-aligned Ukrainian interests, inadvertently revealed on Tuesday that he had communicated about a Ukraine-Russia peace plan with a business associate believed to have ties to Russian intelligence.

The associate, Konstantin V. Kilimnik, is a Russian citizen who has been charged by Mr. Mueller with obstruction of justice for trying to shape the testimony of witnesses to the events that led to charges of illegal foreign lobbying against Mr. Manafort.

Mr. Kilimnik was said in the inadvertently disclosed portions of the court filing to have received political polling data from Mr. Manafort in 2016. Mr. Manafort relayed a request to have Mr. Kilimnik pass the polling data to two Ukrainian oligarchs who had arranged or provided financing for Russia-aligned Ukrainian political parties for which Mr. Manafort had worked. One of the oligarchs, Serhiy Lyovochkin, attended the Liberty Ball, according to one person familiar with the guest list and another who saw him there.

Last month, prosecutors made a move that was seen as signaling the continuing cooperation of Sam Patten, an American consultant who had worked with Mr. Kilimnik and Russia-aligned Ukrainians looking to build ties to the Trump administration.

Mr. Patten had pleaded guilty in late August to charges including funneling $50,000 in money from an unnamed foreigner who matched the description of Mr. Lyovochkin but was described in court papers only as "a prominent Ukraine oligarch" to buy tickets to exclusive Trump inauguration events for the oligarch, Mr. Kilimnik and someone described only as "another Ukrainian."

Other Ukrainians who came to Washington during the inauguration said prosecutors had been asking wide-ranging questions.

"I have been interrogated twice by the F.B.I. and Mr. Mueller," said Andrii V. Artemenko, who came to the inauguration as a Ukrainian member of Parliament bearing a peace proposal that was later criticized as pro-Russian.

Mr. Artemenko said he had testified before Mr. Mueller's grand jury last summer and had answered questions from the Mueller team "about what is my purpose of this trip, how I can get there, and what I did, how I got invitations and tickets and stuff."

Serhiy Kivalov, a Ukrainian lawmaker known for pro-Russian initiatives, also attended the inaugural: he took photos as President Trump danced with his wife, Melania, during inaugural festivities in January 2017. He also took photos of his coveted tickets and passes to the soiree where it took place, the Liberty Ball at the Walter E. Washington Convention Center, posting them on Facebook and declaring that "it was an honor" to attend.

If you see a spelling error on our site, select it and press Ctrl+Enter
Tags:USAinvestigationTrumpMueller