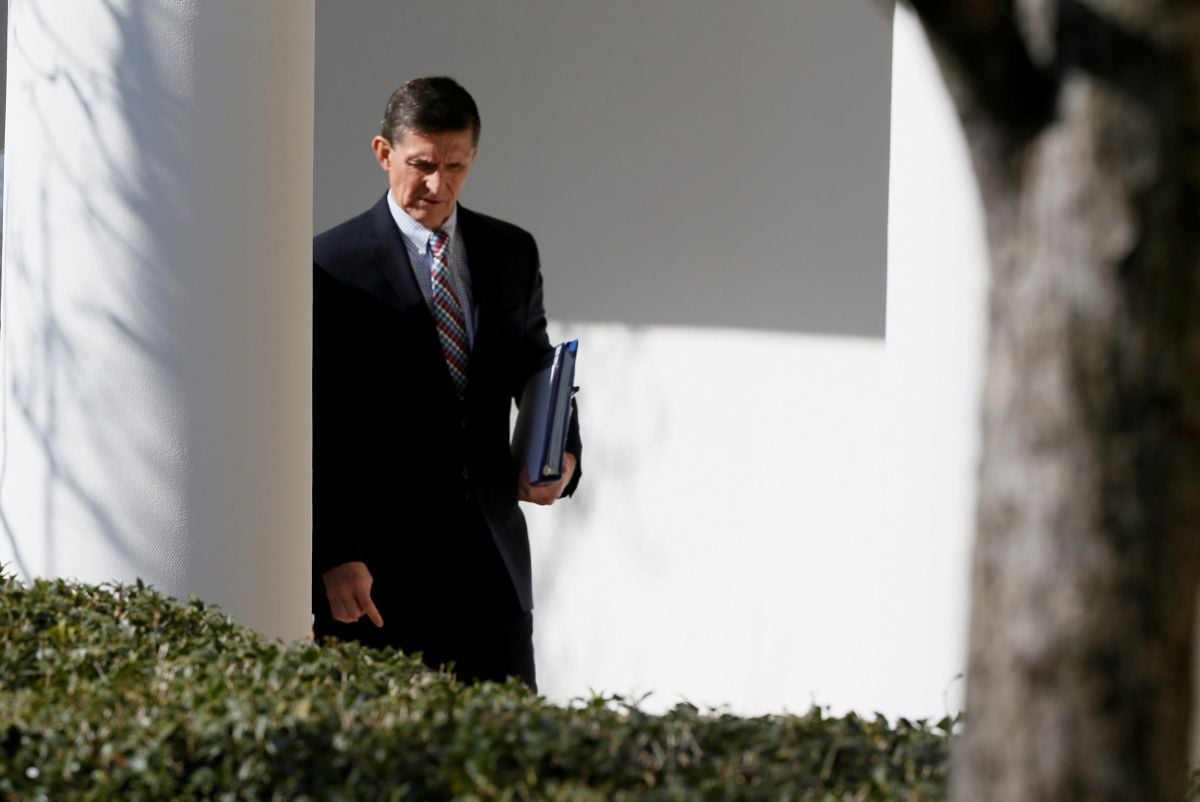 The retired three-star general, who once led a chant of "lock her up" against Hillary Clinton at the Republican national convention, has emerged as a central figure in multiple investigations into possible collusion between the Kremlin and the Trump campaign, the Guardian reported.

Among startling new details unearthed by investigators working for a congressional committee is that the nuclear power plan Flynn was allegedly secretly promoting, during the campaign and once he joined the White House, involved a Russian state-owned company currently under U.S. sanctions.

They are also examining whether the proposal is still being promoted by the Trump administration, months after Flynn was forced out of his role.

A letter released on Wednesday by top Democrats who are investigating Flynn, who was forced to resign from his post in February because of questions about his links to Russia, accused him of violating federal law when he failed to disclose a trip he took to the Middle East in June 2015 to promote the U.S.-Russia project, as well as several contacts with foreigners that they allege ought to have been declared.

The lawmakers said the apparent disclosure violations carried a penalty of five years in prison and that new information they had discovered over the course of their ongoing investigation into the U.S.-Russia project had been provided to Robert Mueller, the special counsel who is leading a federal investigation into whether Trump campaign officials colluded with the Kremlin in the 2016 election.

Omissions of such meetings and trips could emerge as a powerful tool for federal investigators, who can use the threat of jail and other penalties to persuade subjects who are under investigation to cooperate in exchange for leniency.

Read alsoReuters Exclusive: U.S. investigators in Russia probe look at role of Flynn partnerThe congressional letter states that Flynn refused to provide the committee with any explanation of the trip, but did not deny allegations that the Middle East trip and other foreign contacts had been omitted from his security clearance renewal application in 2016, and concealed from investigators who were conducting a background check on him.

It said that consulting groups that were allegedly working with Flynn on the project, X-Co Dynamics and ACU Strategic Partners, provided information to the committee and are being asked to provide more documents. There is no suggestion that either company is under investigation.

The letter also alleges that Thomas Cochran of ACU, who provided the congressional investigators with some information, said that even after Flynn was fired from his post, the proposal the retired general promoted continued to be seen as part of the Trump administration's diplomatic "toolkit". Cochran said that he believed it was seen by both the U.S. president and the secretary of state, Rex Tillerson, as a "valuable private sector mechanism" for stabilizing and improving relations with Russia. The joint project was also seen as a way to accelerate U.S.-Russia cooperation in the Middle East.

A copy of the letter, which was sent by Democratic congressmen Elijah Cummings and Eliot Engel to individuals who allegedly worked with Flynn on the proposal, reveals stunning new allegations about Flynn's contacts with foreign business associates, all of which were allegedly kept from public view while he was serving as the nation's chief intelligence official in the White House.

At the heart of the investigation lies a proposal that was allegedly developed by Flynn and others before the 2016 election campaign to create a U.S.-Russian partnership that would build and operate nuclear power plants in the Middle East.

The committee said it had confirmed from three sources that, as part of this plan, Flynn traveled to Egypt and Israel in June 2015 to promote the project, where he met with government officials. According to Cochran, an official at ACU Strategic Partners, which worked on the project, Flynn made the trip in part to argue that the plan he was proposing would be in Israel's best interests.

Read alsoJames Comey testimony: Trump asked me to let Flynn investigation go – CNNThe plan called for the creation of an international consortium of U.S., French, Dutch, Russian, Gulf Arab, British, Ukrainian, and Israeli companies to design and build 40 nuclear power reactors. The plan included a service to maintain control of dangerous spent fuel. One slide provided to the committee said that Rosoboron, a Russian state-owned weapons exporter that is under U.S. sanctions, would provide "total regional security" for the project.

Two email chains about the project that were provided to the committee were said to show that Flynn and others were in communication with Omar al-Khaldi, a major general and the chief executive of the design and development bureau of Jordan's King Abdullah.

Lawmakers said they had received no specific information about the identity of foreign government officials that Flynn communicated with before, during, or after his trip. Investigators are also still investigating the names of other Trump campaign officials who allegedly discussed the project with Flynn.

The lawmakers said they were seeking all documents and communications from the two consultancy groups who were working on the project that refer to Flynn's foreign travel and meetings with foreigners.

If you see a spelling error on our site, select it and press Ctrl+Enter
Tags:RussiaUSAFlynn