…first orthodox  chirch in this part of the world

The St. Philip the Apostle Russian Orthodox Church Complex has been constructed in the United Arab Emirates, next to the Mar Thoma church in Al Yamook, reminiscent of a little piece of Moscow in a sandy Sharjah site. The first Russian Orthodox Church in the Arabian Peninsula held its first service and opening ceremony on Saturday, August 13. It is the biggest ROC Complex outside the former Soviet Union that also includes a cultural centre. The temple is named after Saint Philip, one of the 12 apostles of Jesus Christ. With the first stone laid in 2007, the church was financed by Ukrainian businessman Yuri Sidorenko - Chairman of the Supervisory Board of the EDAPS Consortium which produces identification documents, such as electronic passports, and information systems. He is also the adviser for International and Corporative Development of the Specialised Enterprise HOLOGRAPHY. The church may be attended by 900 people simultaneously. Inside, one of the walls is adorned with images of religious icons hanging in ornate golden frames and separates the church from the altar. This Wall of Icons is made of Indian teak wood, carved and plated with gold leaf in the UAE. All the icons were painted in Moscow and brought to Sharjah. Above, a painted fresco adorns the high domed ceiling with four smaller frescoes of Jesus Christ`s apostles representing Matthew, Mark, Luke and John. "One cannot overestimate the importance this church has for the 200 thousand of Russians residing in the UAE. It is the first Russian Orthodox Church in this part of the world, and people have been anticipating it for a long time," said Mr. Sidorenko. He was awarded with the Order of Glory and Honour First Degree by the Holy Patriarch Kirill of Moscow and All Russia. This Order is the highest award of the ROC. The sponsor mentioned that the construction of the Church Complex "was not hard thanks to the support of Sharjah leadership, who expressed a sincere desire for a cultural monument to be located here. We are grateful to the UAE government". Holy Father Alexander Zarkeshev, 46, said he was overjoyed the coming of this day. Saint Philip the Apostle Russian Orthodox Church Complex will start regular services in September and will be opened for church members of all religions. 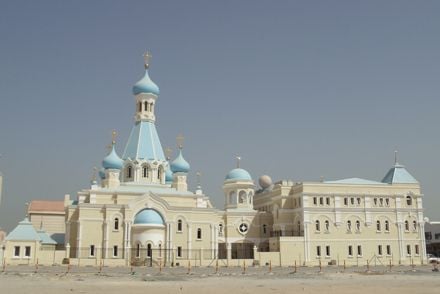