The Ukrainian economy has been falling into the abyss of a second consecutive year, and it seems, it has finally reached its bottom. The Cabinet says that the worst period is behind, while there’s growth ahead. The experts are less optimistic. They believe that, without creating prerequisites for the economic recovery, the economy may remain at the bottom for several years.

"The Ukrainian economy has experienced an unprecedented decline in the past year and in the first and second quarter of this year. GDP was down 7% last year, while this year we expect it to drop another 11.6%. We have experienced the banking run, when we lost 30% of deposits in the local currency and more than 40% in dollars. Plus the war, plus the expenditures of the military budget, which never were planned, plus gas, which we had nothing to pay with. It’s not even a ‘perfect storm,’ it’s a real thriller. But we have stabilized, we have passed through [this period]," said Valeriya Gontareva, head of the National Bank of Ukraine.

Her optimism is confirmed by concrete figures. The economy grew 1% in Q3 2015 compared to Q2. At the end of the third quarter either growth, or a slowdown of decline were recorded in almost all industries.

The experts also note the positive dynamics. "According to our estimates, the real economy has bottomed out in the second quarter of this year. The third quarter was marked by the first signs of recovery, especially in the industry and in related spheres, particularly in cargo shipping. At the same time, domestic-oriented sectors still show weak dynamics," said the chief economist at Dragon Capital, Olena Belan.

First of all, agriculture slowed down its fall almost by two times. Ceasefire [in Donbas] has also reduced the rate of decline of industrial production in September down to 5.1% compared to 5.8% in August. In particular, the performance of the mining industry has been rapidly growing, due to coal production increased by 14.9% compared with 1% in August. September also saw a two-year trend towards recession in metallurgy finally reverse: production volumes increased by 3%. A gradual resumption of deliveries of Ukraine-produced coke to the steel companies and a low comparison base effect resulted in the accelerated growth by 51.1%, in coke production.

The free fall of the Ukrainian economy has stopped primarily due to macroeconomic stabilization.

"Signs of stabilization are being observed. Industry dynamics is being redressed: the fall is not deepened, while September saw growth compared to August on a number of indicators, in major industries, by the way. The hryvnia exchange rate has long been stable. There is a slight growth in lending to legal entities, the volume hryvnia deposits has started growing timidly. The inflation remains within the set frame," said Yaroslav Zhalilo from the National Institute for Strategic Studies.

Indeed, the significant devaluation of the hryvnia was stopped in March, and, despite a gradual easing of forex controls, the exchange rate remains stable. This factor has allowed the National Bank to enter the interbank forex market with the purchase of currency and increase international reserves to nearly $13 billion, which is 3.1 months of imports in the next period.

At the same time, depreciation of the hryvnia and the fall in domestic demand have eliminated the country’s current account deficit and imbalance in foreign trade.

"Foreign trade deficit we saw in 2013 and 2015 is being redressed. Redressing this imbalance comes with a high price – the drop in both exports and imports. As the import falls at a higher pace, we have a zero balance of foreign trade," said the expert from GfK Ukraine, Tatiana Sytnik. 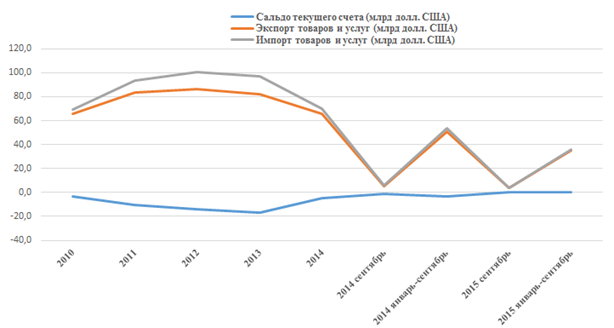 According to experts, the elimination of foreign trade deficit allows the National Bank to increase forex reserves. At the same time, they do not believe in the sustainability of this trend - imports will grow, while the growth of exports need better conditions.

Devaluation of the hryvnia and inflation allowed Ukraine to increase budget revenues and eliminate the imbalance of the state budget, which for the first nine months recorded a $8.8 billion surplus, and generate $43.6 billion in the single treasury account.

However, the accumulation of such an impressive amount has been achieved by freezing social benefits and government programs. This deprives the economy of much-needed domestic demand, and the situation requires correction in the medium term.

At the same time, low domestic demand, coupled with the relative stability in the forex market and a tight fiscal policy, has led to a steady deflationary trend over the past five months. By the end of October the deflation reached 1.3%.

Will there be growth?

All of these positive signals suggest the economic decline stop. But one thing is stopping the decline and stabilizing the situation, and the other thing is resuming economic growth. The government predicts a 2% growth in Ukraine’s economy in 2016. "2015 was a year of macro-economic stabilization, and 2016 will be a year of economic growth. The worst is behind us, so the government and the central bank are ready to face the challenges," said Economy Minister Aivaras Abromavicius.

According to him, in the near future the Ukrainian economy will rest on three pillars - deregulation, privatization and the fight with corruption. International lenders also believe in the growth of Ukraine’s economy. Despite the fact that the International Monetary Fund, the World Bank and the European Bank for Reconstruction and Development worsened the macroeconomic outlook for Ukraine in 2015 (predicting the a 9-12% fall), they agreed that the year 2016 will be marked by a 1-2% economic growth.

Volodymyr Lanovoy, former Economy Minister, Doctor of Economics, thinks different. He believes that there may not be any growth.

"The officials apparently believe that the output growth will start as soon as the authorities stifle the devaluation of the hryvnia exchange rate and slow down price inflation. To overcome the crisis we need to produce more products and win market competition, not just order to reach certain levels financial performance in the economy. Financial stability alone does not lead to increased production. We may reach the bottom, as we are assured by the officials concerned, and remain there, without going back up," he said, adding that the crisis has a more profound nature, and the next year the economy will continue its decline by 4-5%.

The representatives of big businesses share his opinion, believing that the the economic situation will not start improving until 2017. "We are just approaching the bottom. We will be having this fever for another two years, and this is provided there’ll be no geopolitical cataclysms," said Ruslan Bozhko, financial director of one of Ukraine’s largest metallurgical companies, Zaporizhstal plant.

Ukraine’s top officials try desperately from time to time, at various business forums, to instill optimism about the prospects for recovery of the Ukrainian economy and convince the representatives of the Ukrainian business and investors to invest in our country today. They promise significant easing of doing business and say they are ready to confront macroeconomic challenges. However, more than half of employers say that they will not invest in Ukraine in the near future, under any circumstances. This factor can delay the economic growth for many years.

Drivers of the rise

Experts: with no real reforms, the economy may remain at the bottom for several years / www.info-prom.com.ua

"Alas, so far we see stabilization of depression. To re-emerge from the crisis and restore sustainable economic growth, it is necessary to forestall decreased stability in a number of indicators, primarily inflation," said Zhalilo.

In the wake of the unfavorable situation on foreign markets for key Ukrainian export goods, the consumer sentiment must be improved in Ukraine. In order to stimulate domestic demand, the government will have to think about the actual indexation of minimum wages and pensions. That will push prices up again. Also, in order to stabilize domestic demand, a tax reform is needed. It would reduce the pressure on business and allow businesses to earn more. Besides, it is not so much about lower interest rates, it is more about less audits and no corrupt pressure from the fiscal authorities.

Experts predict that, despite the challenges, foreign investors will support the agricultural sector, oil and gas extraction, as well as infrastructure projects. But there will be virtually no lending because of the high public debt. In such circumstances, it is extremely important for Ukraine to continue its program of cooperation with the IMF, as well as acquire international donor assistance.

But no one will pour money into Ukraine and wait for growth, although the statistics will surely demonstrate only the advantages in such an experiment. All of these advantages will be short-term without the implementation of effective reforms, decentralization, deregulation, de-monopolization and the fight against corruption. The reaction of investors to such developments is quite predictable.