Volodymyr Groysman’s Cabinet seeks to prolong a ban, which has already been enforced for 15 years, on farmland sale, launching the landl ease rights market instead. Not only will it not return to the land-owners the opportunity to dispose of their property, but it may help fraudsters evade paying fees for using the land, according to experts

In the distant 1990s, almost 7 million people in Ukraine became owners of nearly 28 million hectares of farmland in total. Today, more than half of these people are pensioners. Basically, the owners of land plots rent them to agri-enterprises.

The owners of the land may be willing to sell it but they can’t, according to the Ukrainian legislation. Agricultural holdings and farmers found themselves in a similar situation. Perhaps they wish to buy this land but they are also bound by the rules prohibiting such deals.

The moratorium was introduced in Ukraine in 2001 for two years, to give the authorities some time to bring order to the land market. But since then, the ban has been extended seven times.

Literally, from the moment the moratorium was imposed, the Ukrainian society has split in two camps – the supporters and opponents of the land market. Their confrontation raises social tensions and, unfortunately, creates a fertile soil for political speculations.

Every time a moratorium is extended for a short period of time (up to two years), the reason for such decision is always the same – to find a compromise between supporters and opponents of the land market. But as the deputies keep searching for best way to make everyone happy, the land owners are wondering if they ever get the right to dispose of their property again. The businesses are also roaming in the dark, as they can’t draw any far-reaching plans given the existing moratorium.

Although there is an opinion that the extension of the moratorium is profitable for large agri-holdings involved in shady schemes of buying land at low prices.

Late 2015, the Verkhovna Rada once again ordered the Cabinet of Ministers to draft a bill on farmland turnover. The government was supposed to cope with this task by March, but no one in Parliament has seen as of late June. The participants to the process say the bill draws too much debate.

It was reported earlier that the ministries consider a solution which is innovative for Ukraine – to abandon for an indefinite period the idea of lifting the moratorium and instead allow the purchase and sale of rights to lease the land. However, the experts note that this can only do harm to the owners of land.

In practice, the market of land lease rights will look something like this. The farmer concludes the land lease deal with the owner of land, and for the term of its duration (e.g. 10 years), they are entitled to lease this land. A couple of years later, they might no longer be willing or able to continue the rent. But there is another entrepreneur who would be happy to work on this land. Then the first farmer transfers to another one the right to lease land and gets paid for it. At the same time, the land-owner is out of this deal.

"The owner of the land shall not participate in the sale of lease rights. If all terms are met, it is not a matter of his concern," Minister of Agrarian Policy and Food Taras Kutovyi has told UNIAN.

However, according to a board member of the Land Union of Ukraine Association Serhiy Bilenko, in this case, the owner would be put in a difficult situation as they actually don’t know who uses the land.

"There may be a situation when the right to lease land will be sold with no control virtually to anyone. With the help of legal manipulation, big problems can be created to the owner. The rights can be sold to some front company with an opaque structure of ownership and thus the owners might fail to receive lease payments.

In case of violation of the rights of the owner, the minister proposes to terminate lease contracts. But this can only be done through the courts. According to Bilenko, if the user is registered in the other part of the country, this task may be significantly harder to accomplish. Besides, the land owners from among the Ukrainian pensioners will hardly succeed in litigation.

"The conditions will be very good for the raiders. And this is unfair to the owner," said the expert.

Experts: The sale of lease rights may be a convenient tool for the "shadow" businesses / Photo from UNIAN

According to the minister of agrarian policy, refusing the land market in favor of the lease rights turnover has several objectives. Not only the ministry wants to soothe social tensions, but it also seeks to make life easier for the farmers.

Today, the farmer can’t just quit business – they are bound by the lease contract. Closing a business, they must hand over to someone the leased land. At the moment, it is possible to do only if the farmer finds the one who needs this land and, upon the agreement with the owner, they renew a contract filling in the data on a new user. Or the farmer can hand over to the new user corporate rights to their farm. Of course, selling the right to lease without the owner’s presence does not require much effort. However, deputy director general of the Association of Farmers and Private Landowners Mykhailo Danchenko sees no problems at the moment with the renewal of the contracts.

"I do not see any problem in handing farmland over to someone else for rent. Therefore, I do not know whether this tool is necessary. Can there be some pitfalls of which we learn too late?" Danchenko said. Indeed, many experts believe that the sale of lease rights can be a very convenient instrument for those businessmen who have received lease rights in a wrongful way. The sale of lease rights to some front companies will obviously be much easier without the participation of the actual owner. Besides, it will be easy for the fraudsters to distance themselves from this "shadow" asset and evade responsibility.

The most important positive change that should bring the lease rights market will bring is an opportunity to take a bank loan providing those rights as collateral. But the farmers tend to be skeptical about this prospect.

"The loans are a good thing anyway. But the question is what the interest rate will be. Farmers don’t want to cooperate with banks under the current terms of loans," said Danchenko.

According to the expert, if the interest rates on loans are reduced, then of course, the farmers will consider the lease rights as collateral. But the banks still don’t know what to do with such a tool. The financial institutions in Ukraine are not allowed to be “farmers,” so if the borrower cannot repay the debt, the bank will need to somehow monetize these assets. According to the adviser of the Board on agriculture at Credit Agricole Jean-Jacques Herve, the banks will need to be a bit “reformatted” at the legislative level to this end. But he doubts whether it’s all worth it. The expert believes it’s not the bank’s task to sell lease rights. Market will be sluggish 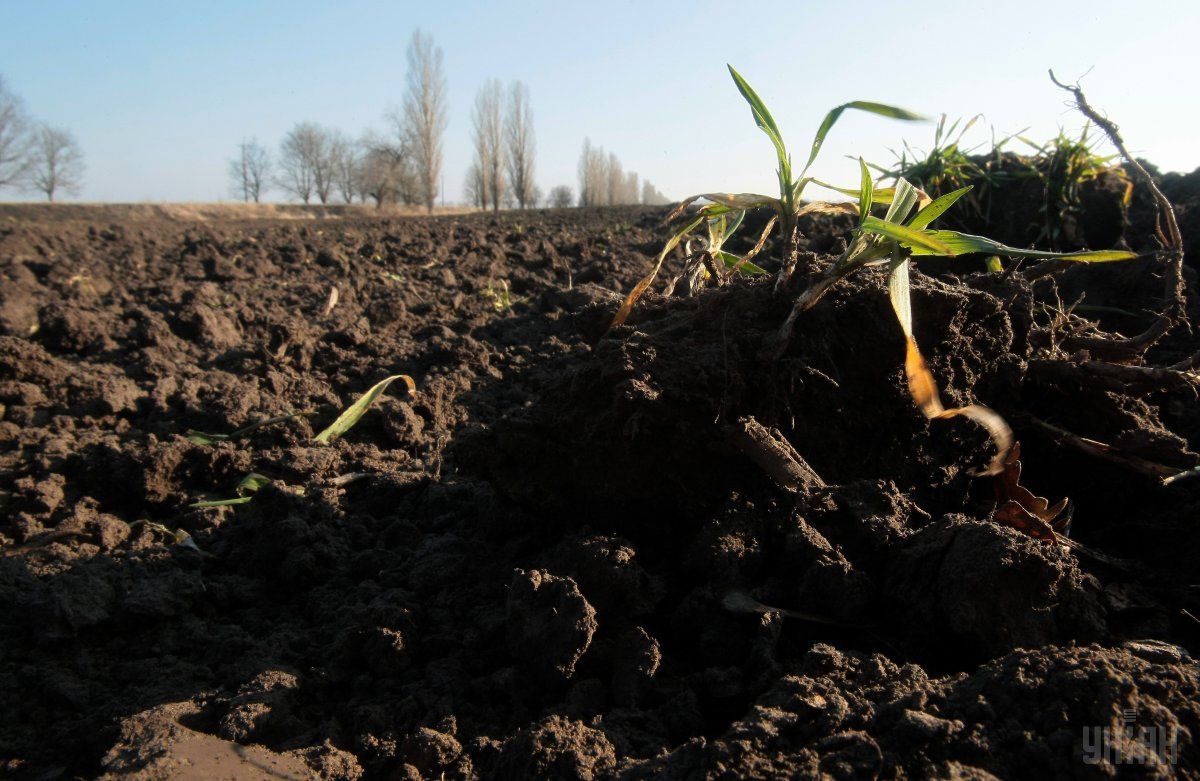 Expert: The launch of the lease rights market will define more clearly the land as an asset / Photo from UNIAN

The market of lease rights has one more task – to help determine the future value of the land. Since the Ukrainian land has for 15 years been under the moratorium, no one knows how much it actually costs today, and many people fear that after the sale is allowed, it will all be sold for a pittance.

"I often hear that with the opening of the land market, people will sell their land plots for a pittance. There is a certain social unacceptance of this market. However, with the lease rights market, we will understand how much the land will cost after we decide to lift the moratorium. When we see the figures, the people will also shape a certain opinion toward the possibility of land sale. Then, perhaps, all concerns about the unworthy prices will fade," said minister Kutovyi.

However, those who use the leased land don’t have full understanding of how the market will be launched. The land is a long-term asset, so if we don’t see a large number of speculators, no active bidding in this market should be expected says CEO of the agricultural holding KSG Agro Serhiy Mazin.

"Land lease rights turnover is not a complex thing. It involves the landholder. It is rare when the same land has four-five users change. This is a disaster, there’s something bad going on in this area. That’s why I can hardly imagine any impressive turnover," said Mazin.

Despite the shortcomings of the agrarian ministry’s venture, experts also note some of its possible positive effects. According to Mazin, launching the land lease rights market will help identify the land as an asset of the company. Jean-Jacques Herve noted that both for the Ukrainian farmers and foreign investors, any decision of the authorities will be a positive thing if it stabilizes operations with the land.

According to experts, to avoid the problems that Ukraine may face after the launch of the lease rights market Ukraine can, instead of authorizing the lease rights turnover, improve an already existing tool – emphyteusis. This is also the right to lease land with the possibility of transfer to another person, however it differs from the usual rent with the fact that by signing the emphyteusis deal, the owner of the land originally agrees to the possibility of the sale of lease rights, and most importantly - the land user is obliged to pay a certain share of the sale to the owner.

Member of the Board of the Land Union of Ukraine Bilenko considers that allowing the sale of land lease rights under a general agreement, as proposed by the developers from the ministries, is impossible unless the law has a retroactive force.

"In signing the contract, the owner did not consent to the transfer to someone else of the right to lease their land. Moreover, the state will intervene in the contractual relations, which were founded long before the adoption of the law on the market of land lease rights, and this is prohibited by the Constitution of Ukraine. The law cannot apply to contracts concluded prior to its adoption. In Ukraine, there is a normal practice of emphyteusis, when the owner originally signs a contract with the possibility of resale of lease rights and receives a normal compensation. This should be working," said Bilenko.

In Ukraine, there are about 22,000 emphyteusis contracts registered and, according to experts, every year their number will double.

At the moment, it remains unclear how the banks will interact with these alternative tools, and whether it will be necessary to renew the existing contracts to allow the sale of land lease rights. Pretty soon, both the supporters of emphyteusis and advocates of the regular sale of land lease rights should present to the public two independent bills, which will finally help understand the differences in their positions.