The visit of the Ukrainian authorities to Malaysia and Indonesia resulted in reaching agreements on trade liberalization and the establishment of business contacts – the important steps aimed to diversify markets under the conditions of hybrid war with Russia. 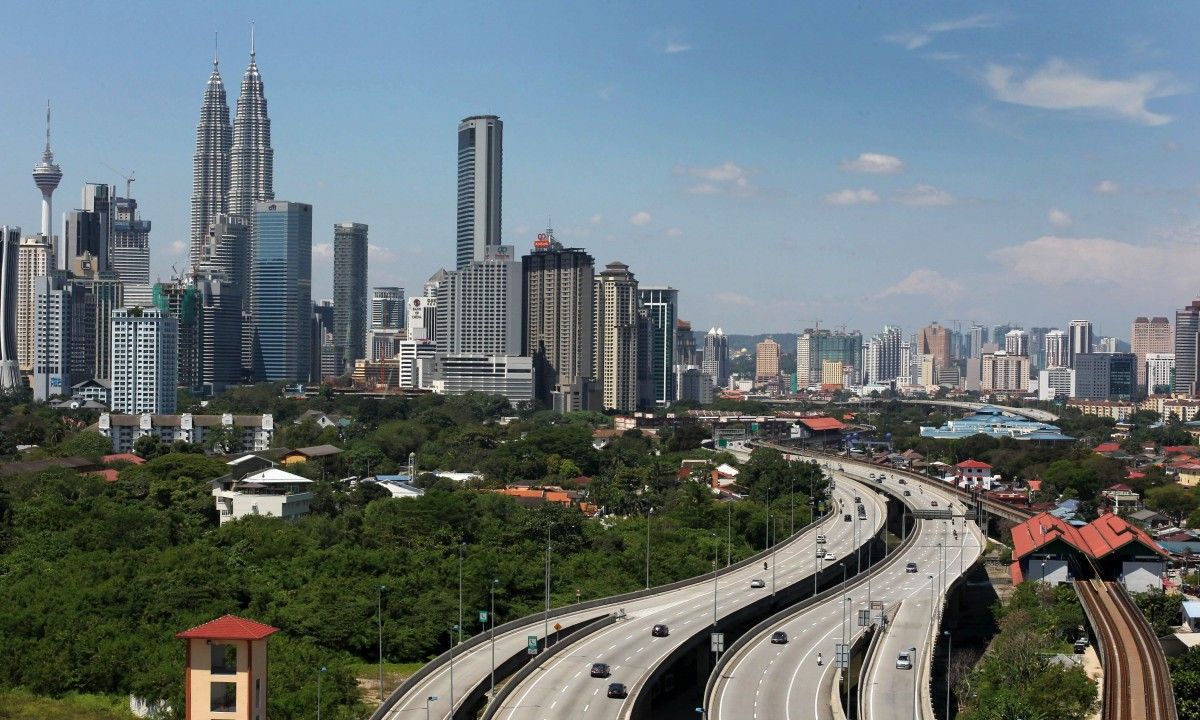 The format of the Ukrainian trade mission in the framework of the visit of Ukrainian President Petro Poroshenko to Malaysia and Indonesia in early August has been updated – representatives of the Ukrainian business were also involved in talks.

The Ukrainian officials have begun preparations for this negotiation process in advance, noting the great prospects of cooperation with the "Asian tigers" for domestic farmers, IT-sector, pharmaceutical and defense industries.

Malaysia and Indonesia, which represent a new wave of "Asian Tigers" - countries showing strong economic growth - look as very promising markets, indeed. At the same time, the economy of Malaysia, a compact island nation with an area equal to half of the territory of Ukraine, has three times the size of our economy. Indonesia, being the most populous Muslim country and the world’s 14th biggest state, has the economy eight times the size of the economy Ukraine.

Geographical remoteness of Ukraine from these countries should not become an obstacle to the establishment of trade relations – that’s what Kyiv decided.

The timeliness of the initiative is confirmed by statistics. Contrary to the general decline of Ukrainian exports in January-May 2016 by 11.5% (mainly due to the Russian trade war), the exports to Malaysia increased by 5.2% - up to $50 million. Even more showing is statistics for trade with Indonesia, reporting a boost by almost 500%, to $81 million.

Given the difficult economic and geopolitical situation, Ukraine is stepping up trade mainly with the EU, due to the DCFTA but, because of the Kremlin-imposed transit restrictions on the Ukrainian transit through the territory of Russia, the country reduces its deliveries to Central Asia.

Under such conditions, the growth of exports to distant Malaysia and Indonesia, trading with which can’t be affected by Russia, a generator of war and provocations, is the evidence of economic interests of businesses of the two countries, which needs to be strengthened with the signals at the government level.

The nature of agreements

The first agreement reached during the visit of a trade mission to Malaysia provides for the avoidance of double taxation.

In particular, the deal sets out how the way the dividends are taxed, as well as the interest, royalties, income from transfer of property, etc. Individual terms of taxation of pensions, income of civil servants, artists, athletes and students are also written down.

Thus, the opening of representative offices of Ukrainian companies in Malaysia and vice versa, as well as the implementation of trade operations between the two countries will become less costly for businesses. 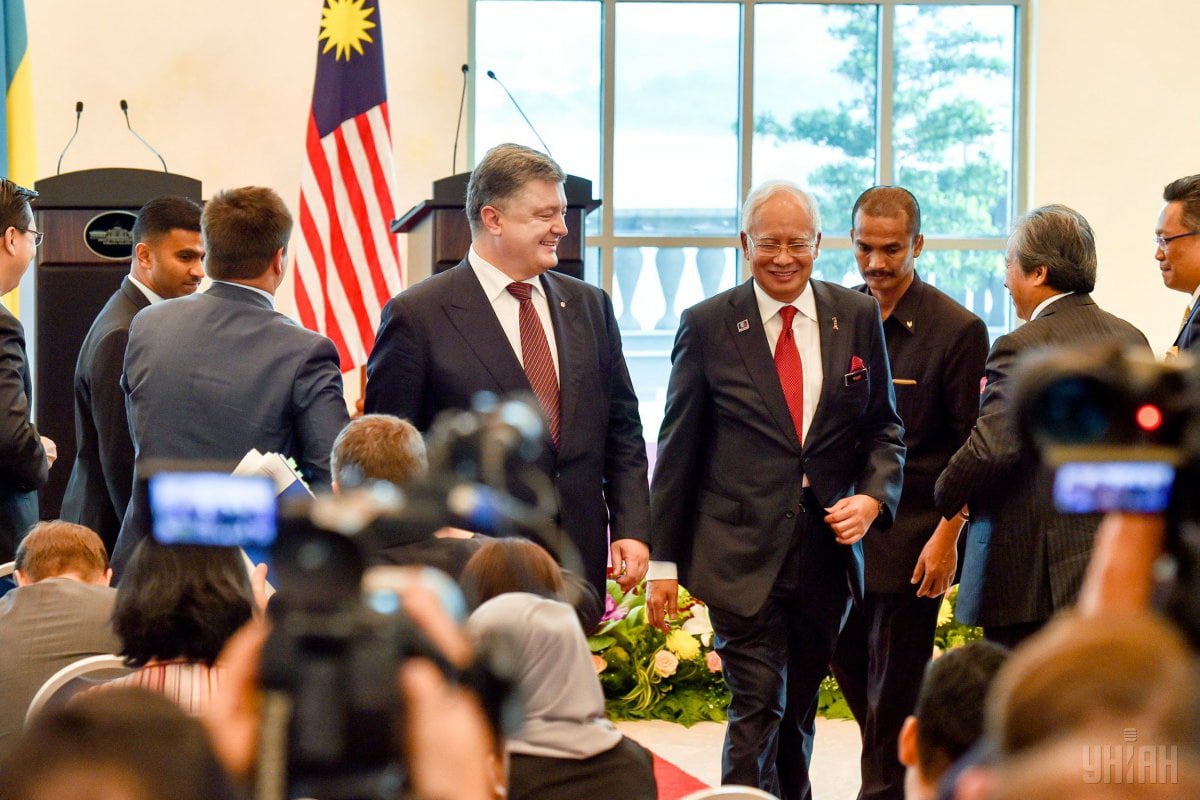 In addition, the Malaysian side expressed interest in the Ukrainian defense industry products, offering state concern Ukroboronprom to establish joint production of armored vehicles and weapons.

The Ministry of Economic Development of Ukraine reported on the establishment of cooperation with Malaysia in tourism and medicine, as well as the transport industry.

The agreements reached by the Ukrainian delegation in Indonesia, have become more ambitious – the countries start negotiations on establishing a free trade area.

"We have agreed with President [of Indonesia] Joko Widodo to begin consultations on a free trade area," said President Poroshenko following a meeting with the president of Indonesia, adding that Ukraine was ready to satisfy Indonesia's demand for agricultural products.

In addition, the two countries signed an agreement on cooperation in the defense sphere.

At the same time, the Indonesian side during official meetings with the Ukrainian delegation headed by President Poroshenko announced the introduction of a visa-free regime for Ukrainians. 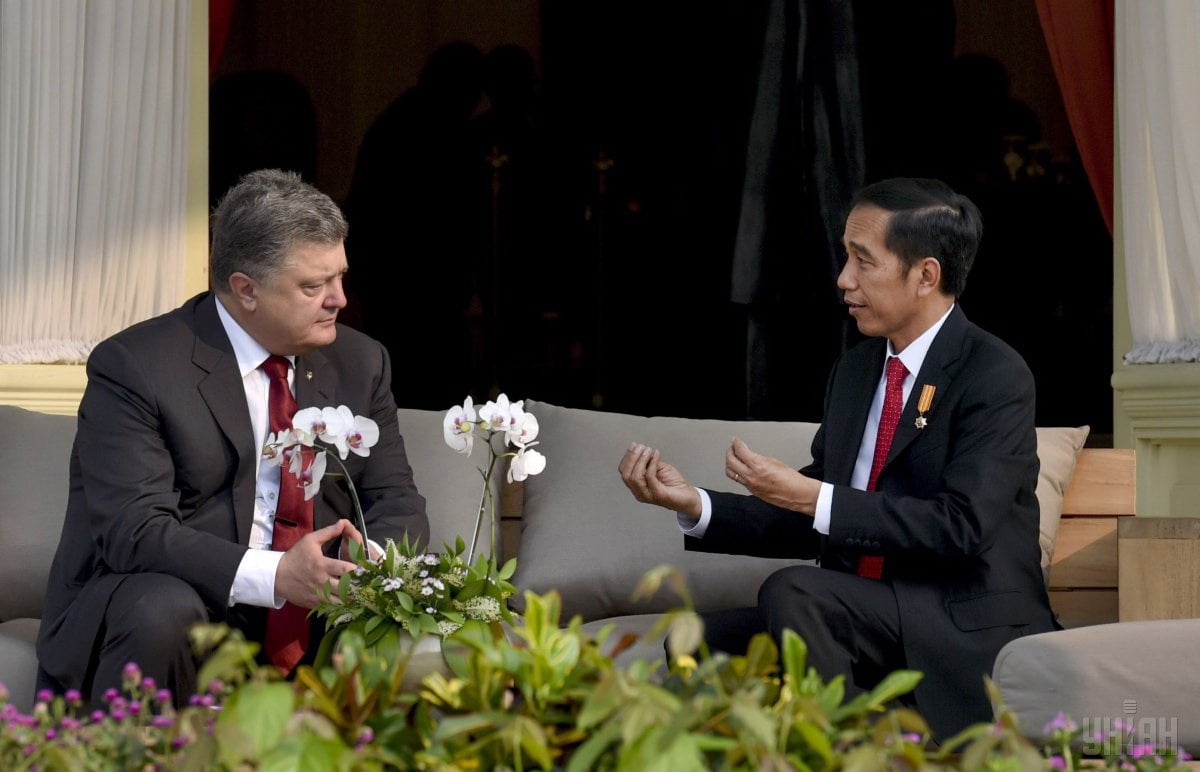 According to Ukraine’s Trade Representative Natalia Mykolska, four Ukrainian companies during the visit of the trade mission signed memorandums on cooperation with their Asian counterparts.

"We have in a good sense ‘used’ the president's visit to promote the interests of our exporters. After all, this is a classic example, when representatives of business circles interested in export development, and hence in the economic development of the state, travel as part of the official delegations," said the Trade Rep.

What can Ukraine sell

The businesses believe that the general prospects for strengthening the economic relations of Ukraine with the "Asian tigers" are positive.

"Malaysia this year, according to Doing Business, occupies 18th position in the ranking (out of 189 countries). For comparison: Ukraine at the moment is only 83rd. If you compare Malaysia with other Asian countries, it has a certain advantage in the development of the industrial sector in comparison with its geographic neighbors," Executive Director of European Business Association Hanna Derevianko has told in the exclusive comments to UNIAN.

According to her, the developed Malaysian industry can become a big consumer of Ukrainian products.

"Key industries of Malaysia are engaged in processing oil products, manufacture of rubber and wood. Besides, a fairly large share has the food industry, given the specificity of the climatic conditions. Accordingly, the government’s choice of this vector as an alternative market for the export of Ukrainian goods and strategic cooperation is quite reasonable. In addition, Ukraine can be seen as a kind of hub for the entry of Asian goods into the EU markets in the light of the Ukraine-EU DCFTA," said the head of the business association.

Domestic producers of fruits and vegetables have already expressed interest in the Indonesian market.

"The existing volume of apple production by domestic enterprises at the level of 369,000 tonnes is enough to exceed three times the existing imports of Indonesia. In addition, Ukraine exports its apples at a price of $218 per tonne, which is six-seven times lower than the prices at which Indonesia is buying them on foreign markets," Ukrsadprom association said.

By the way, as part of a trade mission, pharmaceutical company Biopharma, the supplier of equipment for filling stations, oil depots and storage facilities LP Production, IT-company MMI Group, as well as a manufacturer of fertilizers and insecticides Spetstechnologia have also signed memorandums of cooperation with the Malaysian and Indonesian businesses.

According to Mykolska, Ukraine can significantly increase the export of high-tech products to Malaysia and agricultural products – to Indonesia.

"Malaysia is quite actively purchasing innovation and technology. Both goods and services... Although geographically, Indonesia is a country in Southeast Asia, its potential is the market of 261 million people, feeding whom with rice is a difficult task. Solving this problem with the help of a country with a powerful agricultural potential would obviously be easier," said the trade representative.

In turn, Ukraine can increase the volume of imports of high-tech products made in these countries, including home appliances and means of production. And this is especially important given undercapitalization of the Ukrainian business.

Taking into account the interest of Malaysia and Indonesia in the European market, as well as significant demand for agricultural products and willingness to buy high-tech products, economic cooperation with these countries could become strategically important for Ukraine.

Interest in the potential of cooperating with the "Asian tigers" also increases the size of their markets – in January-May 2016, the country's imported goods were worth $318.9 billion. Thus, annual imports of Malaysia and Indonesia outruns that of Canada. Therefore, if Ukraine manages to take a significant share of attractive markets, this will more than compensate for the loss of the markets in Central Asia because of the "fraternal assistance" from Putin's Russia.