The European Parliament approved a visa-free travel for Ukrainians; the International Monetary Fund voiced a new set of tasks for Kyiv and granted Ukraine the fourth bailout tranche worth $1 billion, followed by another EUR 600 million that came from the European Commission; while the NBU chief confirmed her intention to resign – these are the key economic news of the outgoing week.

This week will certainly go down in Ukraine’s history thanks to a number of events that once again confirmed the European vector of the country’s development and strengthening of its foreign economic relations with the EU member states.

The European Parliament on April 6 by an absolute majority supported the proposal of the European Commission to provide visa-free travel to Ukrainian citizens. The decision is subject to approval by the Committee of Permanent Representatives of the EU Member States (COREPER) and the EU Council, and will enter into force after its signing by the President of the European Parliament and the representative of Malta now chairing the EU, 20 days after publication in the Official Journal of the EU.

Once these formalities are completed (the Ukrainian authorities expect it to happen by mid-June), Ukrainian citizens will finally be able to enjoy free travel across Europe without standing in humiliating lines at the embassies, with piles of application papers documents, which, of course, will positively affect the further relations between Ukraine with European states, and strengthening economic and business ties.

On the eve of the voting at the European Parliament, President of Ukraine Petro Poroshenko signed the law on ratification of the free trade agreement with Canada, approved by the Verkhovna Rada, which is expected to increase mutual trade and provide an inflow of foreign investments. Besides, defense chiefs of Ukraine and Canada, Stepan Poltorak and Kharjit Sajjan, signed an arrangement with one of its main priorities being defense technology and production, which will improve the provision of the Armed Forces of Ukraine with modern military equipment and weaponry.

Last week, Ukraine received the long-awaited fourth $1 billion disbursement from its key creditor, the International Monetary Fund. The provision of this tranche is an unprecedented event for Ukraine since throughout the entire history of cooperation with the IMF, the execution of the credit programs was frozen at earlier stages. The money received from the IMF together with the second part of macro-financial assistance from the EU totaling EUR 600 million last week allowed the National Bank to increase its international reserves to $16.7 billion as of April 5, the highest level since mid-2014.

According to David Lipton, IMF First Deputy Managing Director, Ukraine’s international partners provided significant financial and technical support to the efforts of the authorities to strengthen the economy, and their further assistance remains important for the success of the Extended Fund Facility. In the EFF framework, by the end of this year, Ukraine can receive three more loan tranches totaling $4.5 billion, but only if it carries out the reforms envisaged by the program.

Noting Ukraine's success in implementing the IMF program, the Fund’s experts called upon Kyiv to accelerate structural reforms, starting with the privatization of state assets and development of the farmland market. In addition, the IMF said it did not see any impressive results in the fight against corruption and stressed that Ukraine could not postpone much longer the implementation of a large-scale pension reform, including raising the effective retirement age. The Ukraine-IMF Memorandum published this week specifies concrete steps to reform the country.

In terms of privatization, Ukraine vowed to take all necessary measures to attract authoritative international investors and privatize the Odesa Portside Chemical Plant as early as in the first half of 2017, and initiate by the end of September 2017 the privatization of Turboatom, Centrenergo, Ukrspirt and a number of regional energy companies. In addition, before the end of June, Supervisory Councils shall be appointed to the 15 largest state companies and their audit will be completed in line with international standards.

As part of the land reform, Ukraine plans to adopt by the end of May 2017 the legislation on the turnover of agricultural land and to start farmland sales after the moratorium enforced since 2001 expires in 2018. At the same time, Ukrainian leaders said they would set up an awareness-raising campaign to inform the public about the reform’s benefits.

Ukraine has also pledged necessary changes in the pension legislation before the end of April. Prime Minister Volodymyr Groysman once again said that the government’s version of the pension reform does not provide for raising the retirement age.

In order to boost the fight against corruption, the President, the Verkhovna Rada and the Cabinet of Ministers shall appoint a commission for the external audit of the National Anti-Corruption Bureau. At the same time, NABU shall be granted wiretapping authority and the right to carry out investigations using undercover agents. The brand new Anti-Corruption Court is scheduled to start its work late March 2018.

In addition, Ukraine has committed to the IMF before the end of the year to create a single register of recipients of social payments to reduce abuse in this area, to cut jobs in the public sector (excluding military servicemen) by 4% by the end of the year and by 10%  by late 2019, and adopt legislation on financial police by late April.

The Memorandum also noted a certain gas distribution tariff, the so-called "customer charge." The corresponding decision by the National Energy and Utilities Regulation Commission adopted in late March, caused a public outcry, and on the recommendation of the Presidential Administration its action will be suspended for three months. According to the Memorandum, the new tariff should be introduced from May 1, 2017.

An unconditionally positive aspect of the updated Memorandum is that the Fund supports Ukraine on the issue of debt on the so-called "Russian bonds" – a $3 billion loan received by Ukraine in December 2013 as part of agreements between Russian President Vladimir Putin and the then-Ukrainian President Viktor Yanukovych. Despite the fact that the High Court of Justice in London on March 29 approved the expedited consideration of Russia’s claim on this debt, without accepting the arguments of our country, the IMF still considers it necessary to restructure the "Russian debt" on same terms with other holders of Ukrainian Eurobonds.

Welcoming the receipt of another IMF tranche, the National Bank, as it promised earlier, pleased the businesses and citizens with easing restrictions on the foreign exchange market.

In particular, from April 5, the regulator has reduced from 65% to 50% the rate of compulsory sale of foreign currency earnings by exporters. According to the NBU estimates, this step will contribute to the development of the export potential of Ukrainian enterprises, help reduce exchange rate risks and accelerate the conduct of foreign trade operations, but will not affect the supply of foreign currency to the interbank market, as enterprises now voluntarily sell more than 90% of foreign exchange earnings.

In addition, from the same day, the NBU increased the foreign currency purchase ceiling by 12.5 times, up to UAH 150,000, or up to the amount of mandatory financial monitoring. According to the regulator, this step will help increase the liquidity of the official cash foreign exchange market. 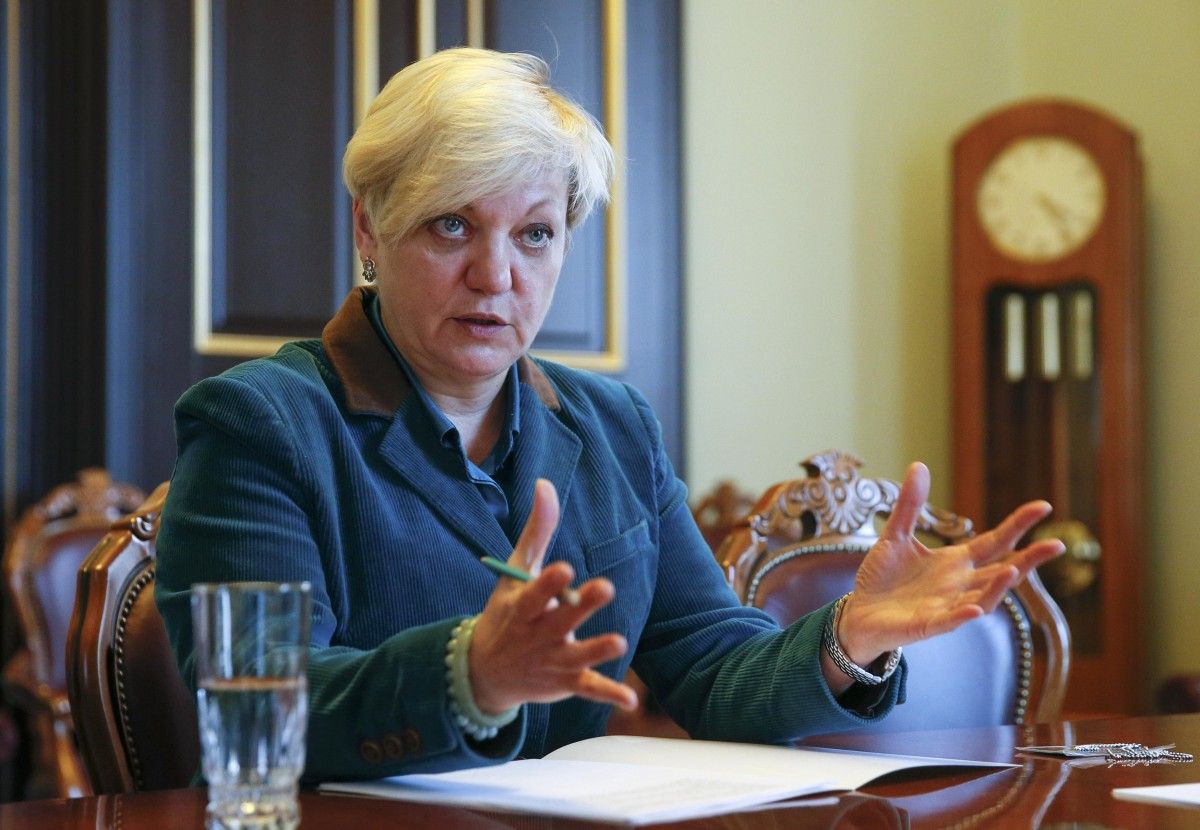 The outgoing week has turned public attention to the topic of the upcoming resignation of the country's chief banker. Early on Thursday, April 6, National Bank Governor Valeria Gontareva was confronted outside her house by several participants of a staged “protest” who showered her with provocative questions. The NBU head affirmatively answered their question on whether she intends to retire. At the same time, Gontareva recalled that the issue of appointing her successor is in the competence of the president and the Verkhovna Rada. "I am writing a resignation letter, I don’t appoint anyone to replace me," she said.

The National Bank called a rally near the house of the head of the NBU an attempt to put pressure on the regulator and filed an appropriate report with law enforcement. The police qualified the actions of protesters as hooliganism and opened criminal proceedings.

As subsequently explained by the National Bank, Gontareva did not write a resignation letter, remaining at her office and continuing to fulfill her duties. That is, the morning statement was fueled by emotion, not being the earlier-promised resignation notice a month prior to its date.

In addition to recommendations to the Ukrainian authorities, the IMF published its updated forecasts, adjusted taking into account the decision of the National Security and Defense Council of Ukraine to introduce a trade blockade of the occupied territories of Donetsk and Luhansk regions. In particular, the Fund has worsened the outlook for Ukraine's economic growth in 2017 from 2.5% to 2%.

Commenting on its forecasts, the IMF noted that in the coming years, the stability of Ukraine's economic recovery will depend critically on the pace and depth of its structural reforms to improve business conditions and attract investment, increase productivity and expand participation in the labor market.

Almost identical were the forecasts released last week by the World Bank, which retained the outlook for the growth of the Ukrainian economy in 2017 at the level of 2%. WB Director for Ukraine, Belarus and Moldova Satu Kahkonen during the presentation of the updated forecast noted that the key risks remain vulnerable foreign markets and the trade blockade in Donbas. At the same time, according to the World Bank forecasts, the intensification of the pace of reforms can accelerate the growth of the Ukrainian economy to 4% in the next two years.

Also, the World Bank responded to the increase in Ukraine's minimum wage from the beginning of the year, worsening the inflation forecast to 10%. In 2018, the price growth will slow down to 7%, in 2019 - to 6%, according to the bank’s estimates.

Meanwhile, the inflation rate in Ukraine so far remains higher than the forecasts of international lenders and the target benchmark of the National Bank for the current year - at 8% +/- 2 pp. According to the latest data by the State Statistics Service, released on Friday, consumer inflation in Ukraine accelerated to 15.1% in March, while prices for hot water and central heating, electricity, and natural gas remain key factors of growth.

If you see a spelling error on our site, select it and press Ctrl+Enter
Tags: IMFGontarevaNBUeconomy