Russia is pursuing the "hot" phase of its war on the territory of Ukraine, also waging a hybrid one. Shortly after pretending to withdraw troops earlier deployed along Ukraine borders "for drills", Russia decided to block the Sea of ​​Azov for navigation for six months, until the end of October, launching yet another "exercise." How massive is the damage done to Ukraine and can these moves be dealt with?

Mariupol is the largest Ukrainian city on the Azov littoral, home to almost 450,000 people, some of whom are openly pro-Russian. It was they who back in 2014 would try to block Ukrainian Army convoys from entering the city. However, the region was lucky not to become one of the sham "republics" – the "rebels" were nipped in the bud. Back then, Ukrainian military literally flew into the city at the last moment… Now it is quiet there and people walk the streets without fear. But the hostilities never stopped in the nearby areas. And the threat to the city is not only about the fact that Russian shells are exploding in the immediate vicinity, but also about the way Russia is acting in the Kerch Strait, on which, to a large extent, the region's economic calm depends.

"The projectile hit the attic"

About nine kilometers from Mariupol there is another world. Vodiane is a front-line village, where the contrast with Mariupol is evident. Just yesterday our positions nearby were massively shelled. "Attacks are very often. We are in a place where there's a lot of fighting," Ivan, a Ukrainian serviceman, told the Hroshi project.

There are almost no people left in the village. Now-abandoned houses are completely destroyed in shellings. All over the village fresh funnels are seen from shell bursts. The backyard gates are badly penetrated by shrapnel. But despite the fact that Vodiane, in fact, is on the front line, eight people still live here. Some even haven't given up on small farming and breeding goats. Life somehow goes on…

Journalists pass by the house where the attic was hit by a mine the other night. The projectile miraculously failed to detonate, so the house survived. By the way, it was a 120 mm mine, proscribed by the Minsk Agreements, of which no one recalls here.

Soldier Ivan tells reporters how the man came to them and said  he had unexploded ordnance in his home. "So we took it out and brought it here. Now we're waiting for the sappers to arrive."

He shows another house where a shell hit the ground just meters away. "Here in the village, such hits are frequent. But the locals aren't fleeing – they have nowhere to go," Ivan says.

In the afternoon hours, more than once mines could be heard exploding nearby. "Even now, in broad daylight, you heard the sound, it was two fresh incoming shells. They're shelling us. Moreover, it's mostly non-aimed shellings, because they are shooting at a settlement that has no strategic weight, there are no military here," Stanislav, another Ukraionian soldier, told Hroshi.

Local residents no longer react to shell blasts. In the eighth year, they hear the war at their doorstep. They even joke: the main thing is that the projectile does not fly into the attic, like a neighbor.

"The neighbor got up to the second floor, where he saw a huge shell," a resident of Vodiane, Halyna, told Hroshi. "Then we all laughed, telling him: 'Serhiy, you will soon wake up hugging a shell. It will fly in and you won't even feel it'." Of course, amid shelling, it's rather scary. But we've grown used to it. We no longer hide in basements. We just hope we don't get killed."

They may stay lucky and alive, but Russia will still try to suppress the region as much as possible, journalists say. Although Russia's defense chief Russia announced the withdrawal of troops, claiming the completion of drills, the war here was before, it's there now, and it seems to remain there.

The military at the positions near Vodiane joke with each other: okay, they might have pulled back their forces, but forgot to withdraw heavy military hardware. "Another staged effort for the world," Ukrainian soldiers are convinced. Incidentally, after the withdrawal of Russian troops, soldiers saw in the occupied Donbas fifteen brand new Russian armored Osavul UAZs. Besides, even after the exercises are over, there are still about 80,000 Russian servicemen deployed near the Ukrainian borders.

"Indeed, we are seeing the withdrawal of certain military hardware to previously designated positions. But what is this hardware? First of all, it's transport vehicles for carrying soldiers, as well as fuel trucks. That is, this hardware plays no significant role in hostilities. We're seeing no large-scale pullback of weapons, including tanks, infantry fighting vehicles, self-propelled artillery units," military columnist Oleksandr Kovalenko told Hroshi. 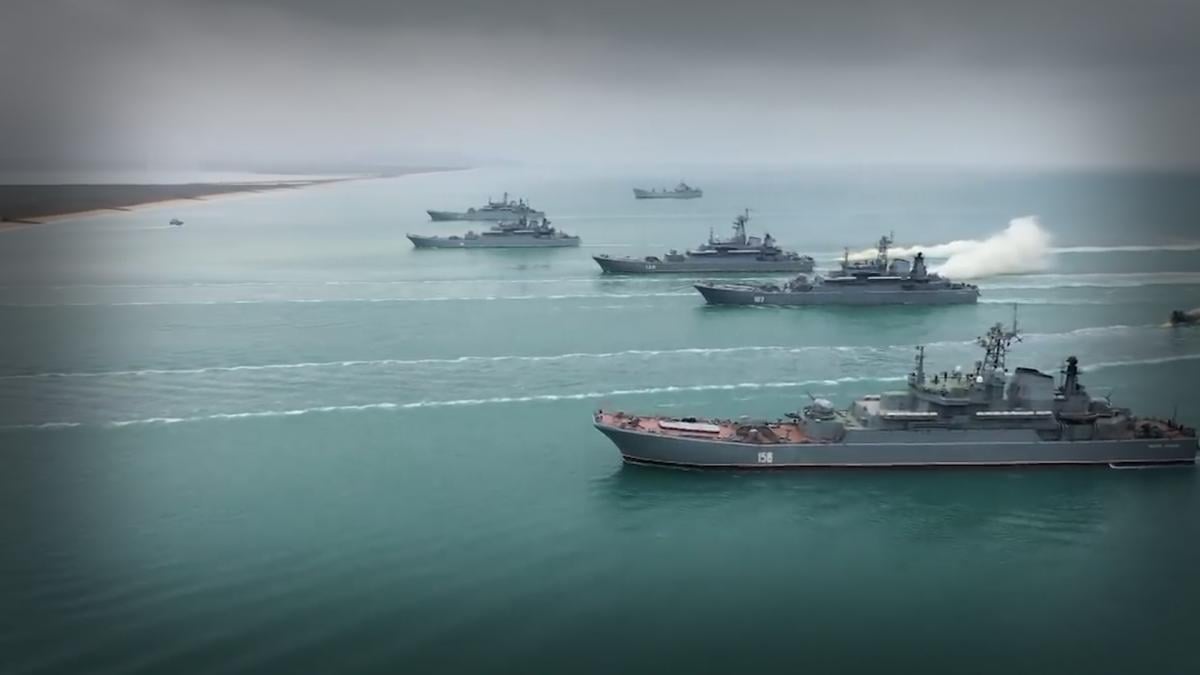 Unfortunately, fears in Mariupol and surrounding areas are not only about an full-blown invasion. Now Russia could also apply economic blockade. Under the pretext of new exercises, the Russians have blocked the Kerch Strait for six months, until October 31!

"We consider such actions a gross violation of the UN Convention on the Law of the Sea, which guarantees freedom of navigation and the right of free passage through the International Strait, which the Kerch Strait is," said Deputy Minister for Foreign Affairs of Ukraine, Yevhen Yenin.

Experts warn it's just the beginning. After all, these pseudo-exercises could go on indefinitely. "What prevents Russia from launching new exercises in September and block some fairways or areas of ​​the Kerch Strait?" Kovalenko asks a rhetorical question.

Maritime trade beings one of the major revenues both to the city budget and to local residents. Mariupol commercial port, as well as the port in Berdiansk, are obviously completely dependent on the Kerch Strait connecting the Sea of Azov with the Black Sea. And while in November 2018 Russia resorted to outright piracy and attack on Ukrainian Navy artillery boats and a tug, this time the closure of the Kerch Strait "for warships" could turn into a complete economic blockade. After all, the Russians have earlier already blocked navigation to Ukrainian ports for merchant ships.

"Let me remind you that in 2018, the Russians stopped about two hundred ships flying different flags, that is, belonging to various countries, thus causing economic losses, delays, and so on," says Yenin.

"After the occupation of Crimea and the Kerch Strait, it was not navigation that shrank, it was exports. Mariupol port is an export-oriented port. The main cargo base was Donetsk and Luhansk regions. As long as they were also occupied, freight traffic decreased. And if there are no cargoes, there is no fleet," says Ihor Barsky, chief of the Mariupol commercial port.

Although the blockade was eventually lifted then, the very existence of the Kerch Strait Bridge connecting the occupied Crimea with mainland Russia significantly reduces trade turnover in Ukrainian ports.

"The Kerch bridge is an obstacle to international navigation, as its height is only 35 meters," Yenin says, adding that such types of ships as Panamax or Handimax, are limited in their ability to transit through the Kerch Strait.

"This has a significant impact on traffic to Ukrainian ports," says Yenin. 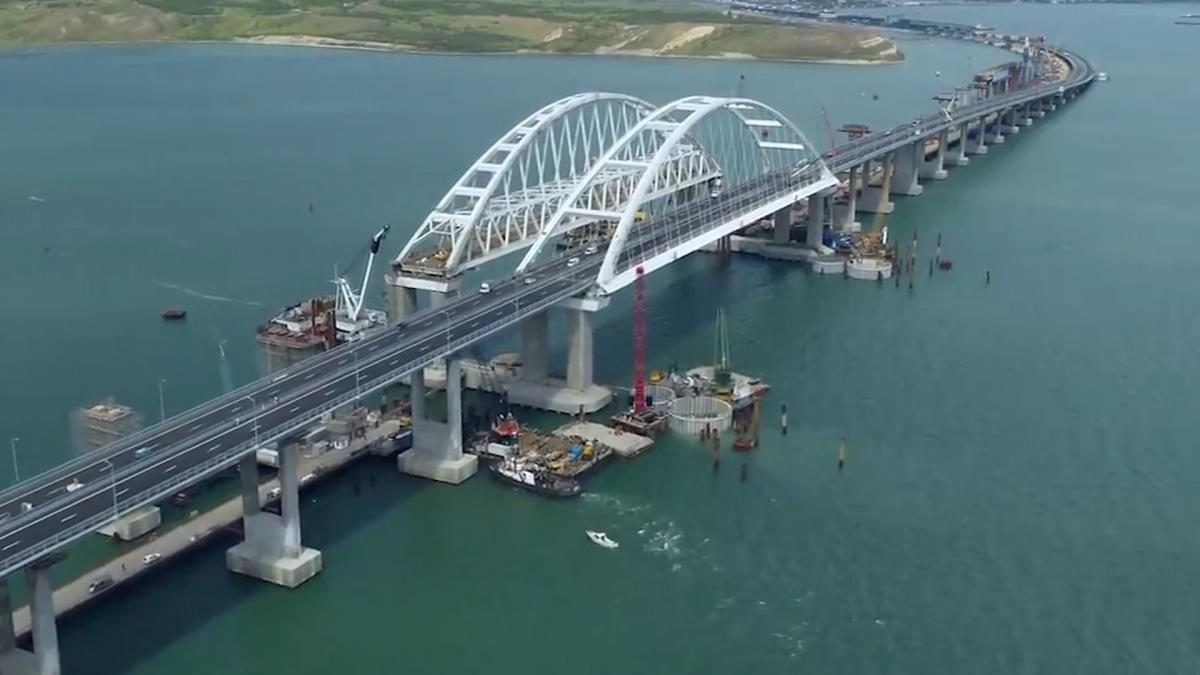 While access to the Sea of Azov turns out to be closed for Panamax-type vessels, Russian warships regularly sail into Ukrainian waters without permission.

"Now near the port of Mariupol, some seven nautical miles away there's a ship of the Russian FSB's Coast Guard. The situation is the same off the coast of Berdiansk. Sometimes they leave more warships there, as it was just three days ago - there were five of them in the area," says Roman Honcharenko, a Ukrainian Navy official.

Ukrainian crews regularly confront the Russians at sea, demanding that the latter move away from our shores. Instead, the Russians don't allow Ukrainian armored boats into the Kerch Strait at all. They also often come up with trumped-up pretexts to justify the blockage of the strait.

"This is a violation of the UN Convention on the Law of the Sea. For example, there were cases where they said a mine dating back to WW2 era was found in the Kerch Strait, but no navigation alert was issued," says Roman Honcharenko. 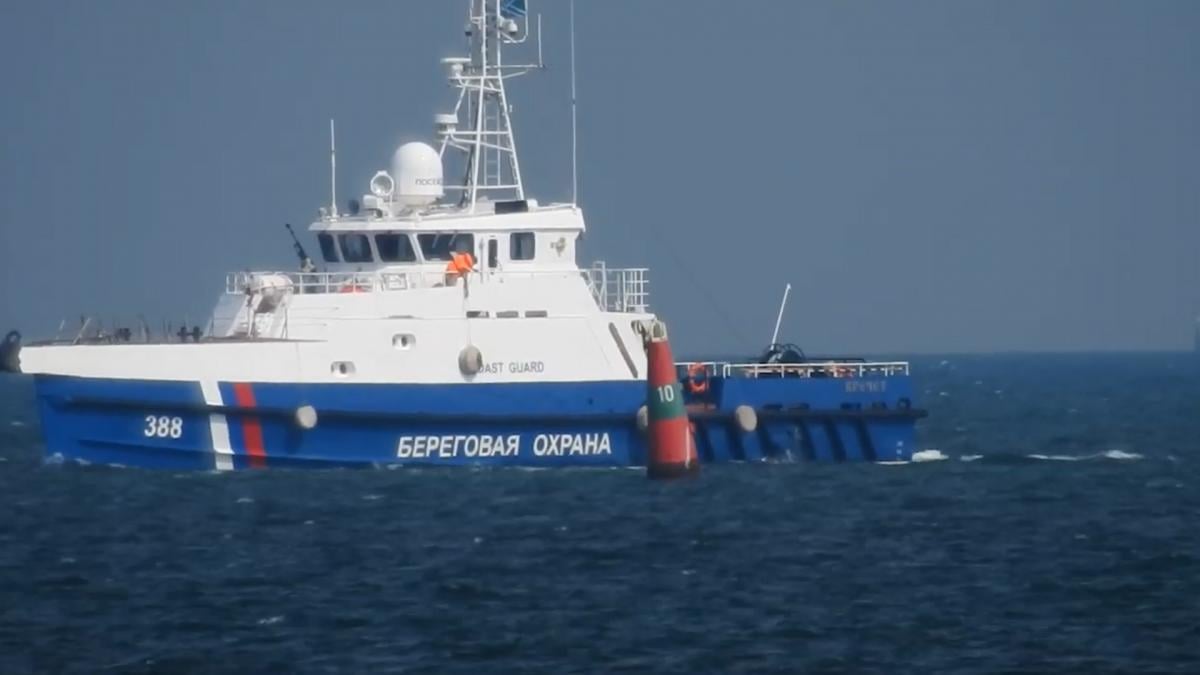 With constant incomprehensible maneuvers and lies, the Russians ignore the law of the sea. The Kerch Strait Bridge as such has reduced trade in Mariupol ports by almost 67%. Manufacturers had to change logistic channels. For example, it is cheaper to transport cargo by a large Panamax ship, but now it is possible only through the Black Sea ports, because the ship can't fit under the bridge.

"Accordingly, it affected the geography of Mariupol port's operations. Now it is the Mediterranean, Europe, North Africa, the Middle East, the Americas, but with lower tonnage. This trend began in 2014 and continued until 2018. In 2018, the port reached its low – when 5,200,000 tonnes was transshipped against 15 million in 2014," says port chief Ihor Barsky.

With long and detailed inspection of the ships, Russians are still allowing the crossing of merchant ships through the Kerch Strait. However, analysts warn that Russia may launch a blockade in order to provoke aggression by local population against Ukrainian authorities.

"The economic factor plays an important role. As for Ukraine, the whole region may lose the main source of budget revenues. This is a very important destabilizing factor. In particular, it allows the enemy to agitate parts of the population dissatisfied with such developments. Moreover, Mariupol is located in the immediate vicinity to the areas of ongoing hostilities, which escalated recently," said military observer Kovalenko.

Against the background of saber-rattling and Russia's potential blackmail through the blocking of the Kerch Strait, this economic blockade of the region and its ports will primarily affect local jobs. In the port of Mariupol no job cuts are being observed so far. According to the port head, Ihor Barsky, despite the reduction of cargo traffic, workers were not sacked because the administration adopted a special strategy to stabilize the port. But how long will it last?

In addition to financial losses for the budget, the blockade could deal a significant blow to the political situation in the region. Hroshi has asked locals about their attitude to the events that had unfolded in the city. For example, when the Russian proxies shelled a civilian neighborhood from their Grad MLR systems. Then 31 people died, including children, while another 117 were injured.

Thus, a resident of the Vostok district in Mariupol says that he woke up from the sound of incoming shells exploding (this happened over the weekend). And when asked who fired them, he answered: "Well, it's the enemy, militants, invaders."

On the other hand, another local resident, Volodymyr, says of the same events: "I didn't see for myself who fired there." And to the question: "Have you made any conclusions in seven years, he answers:" I have. It's Ukrainians who fired. " 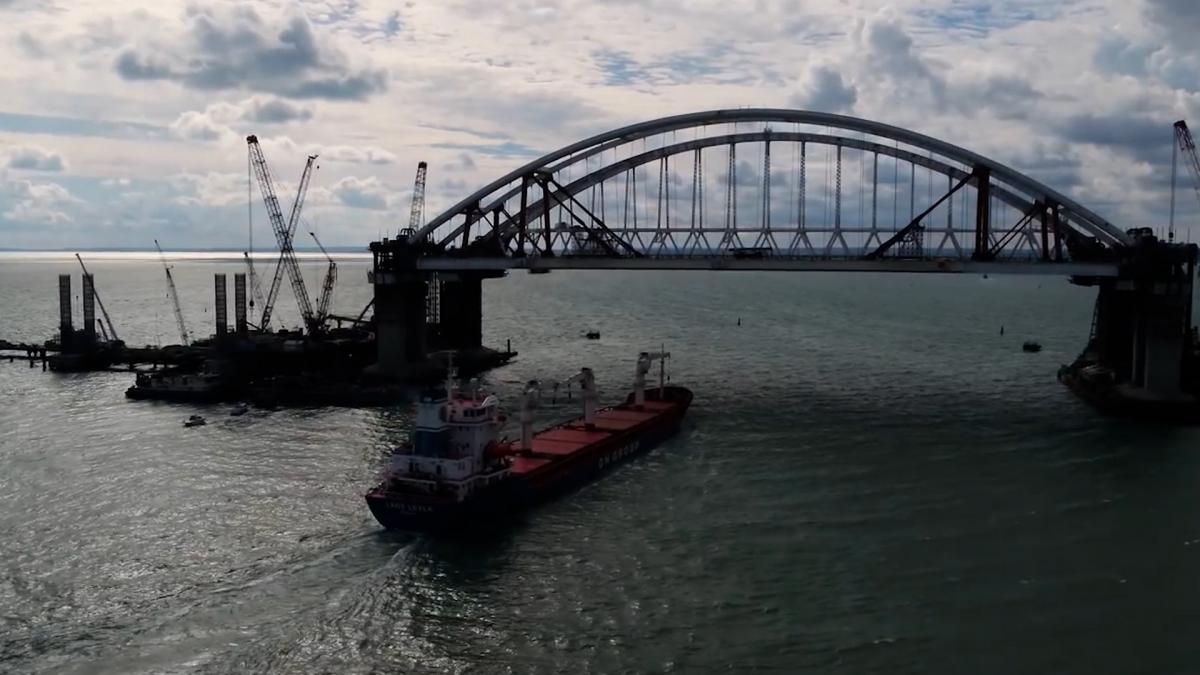 Will Russia dare block the Kerch Strait once again despite the threat of new sanctions? No one knows. Also, it remains unclear how much Ukraine actually lost throughout the blockade of the Strait by the Russians in 2018. But by the end of this month, the Foreign Ministry promises to submit to international arbitration a memorandum, where all the facts and damage calculation would be laid down.