Savchenko: I did not aim any mortar fire, especially at unarmed persons

Nadia Savchenko, Ukrainian prisoner No. 1 in Russia, has told UNIAN in her first interview from a Russian prison about the attitude of the prison guards, her appreciation of Ukraine’s support, and also what she would say to Russian President Vladimir Putin.

The controversial trial against Ukrainian military airwoman Nadia Savchenko continues in Moscow.  Earlier in June, she was captured by Russian special services on Ukrainian territory and illegally sent to Russia, where she has been held in custody ever since.

Russian investigators have charged the Ukrainian servicewoman with complicity in the murder of the Russian reporters Igor Kornelyuk and Anton Voloshin, while not giving any evidence that would prove her guilt.

Savchenko’s lawyers consider illegal the prolongation of her arrest until mid-February, having already presented to the court a broad range of evidence, including statements of witnesses among participants of the military conflict in eastern Ukraine, which they say show Savchenko was not involved in the tragic deaths of the journalists, who worked for a Russian TV channel.

The captive follows the trial from the detention center via video stream. Savchenko says the treatment of the world’s most “humane” court has compelled her to go on a hunger-strike to receive medical treatment (she suffers from otitis, and has not received any medical attention) and could potentially take her life, simply for her love for her homeland.

Savchenko’s first ever interview from a Russian prison was made possible for UNIAN due to the efforts of Savchenko’ lawyer, Mark Feygin. He promised to set up a written interview with a journalist, who would appeal to the Russian President Vladimir Putin about the prisoner’s fate. He kept his word.

UNIAN: Nadiya, what would you say to Russian President Vladimir Putin and the Russian officials who are holding you captive in Russian prison?

Savchenko: It’s not just me – they’re holding captive many more Ukrainians. If they free the captured Ukrainians, get their hands off of Crimea and Ukraine, they are welcome to publically execute me at their pleasure.

Ukraine has never been inferior to Russia. We have been, we are, we will be Ukraine and Ukrainians! We have our own history, culture, identity. There is no need to humiliate us, naming us “Malorussians” or “Novorussans” [terms derived from the areas named in Russian media as Malorossiya or Novorossiya that originally belong to Ukraine’s eastern territory – UNIAN]. We are Ukrainians, we are Ukraine! We are not your “younger brothers” - we are your equals.

UNIAN: In your opinion, is enough being done by Ukraine and the world community to secure your release?

Savchenko: I could never have expected such support. I am very grateful to Ukraine and the whole world for the deep concern with my case, and with Ukraine’s fate as a whole. I can feel this support, and that means that there is enough effort. 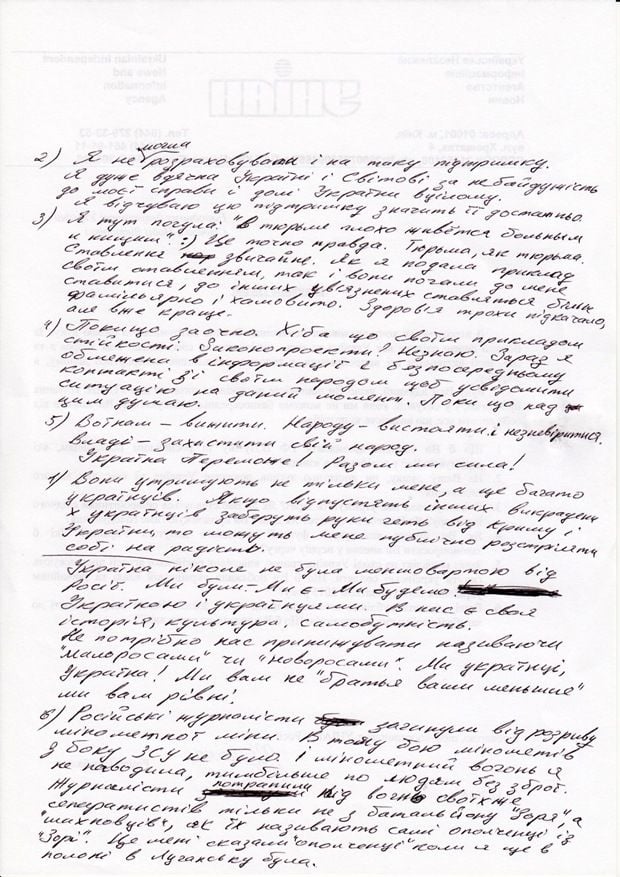 UNIAN: What conditions are you being kept in now, what is the attitude of the detention center’s personnel toward you? How is your physical condition and for how long are you planning to pursue your hunger-strike?

Savchenko: I’ve heard a phrase here, “in prison, it’s tough for the sick and for the poor.” And this is true. If it’s an average prison, the attitude is regular. Their behavior mirrors my initial attitude. The personnel are more rude and informal toward other prisoners. My health has let me down a bit, but I’m getting better now.

UNIAN: How will you perform your functions of a Member of Ukrainian Parliament? What bills would you introduce firstly?

Savchenko: I’ll do it from a distance, for now. Maybe by the means of being an example of resistance. I still don’t know about bills. I’m limited as to information and restricted from direct contact with the Ukrainian people to assess the situation as of today. I’m still thinking about it.

UNIAN: The conflict in eastern Ukraine lingers, there are more casualties among Ukrainian troops because of the Russian aggression. What would you wish Ukrainian administration and regular Ukrainians on the eve of 2015?

Savchenko: I would wish our fighters to survive, our people – to stand strong and not to lose faith. I would wish that the Ukrainian administration protects their people. Ukraine will be victorious! Together, we are power!

UNIAN: Your lawyers have announced they have a range of evidence of your noninvolvement in the death of Russian journalists. What would you add to your defense?

Savchenko: The Russian journalists’ death was caused by a mortar bomb explosion. During that incident, no mortars were used by Ukrainian military forces. And I did not aim any mortar fire, especially at unarmed persons. The journalists came under friendly fire from separatists. But that was not from the “Zarya” battalion, but from “makhnovtsi” (named so by the insurgents from the “Zarya” battalion). The insurgents were the ones who told me this while I was still being held captive in Luhansk.

By Roman Tsymbalyuk for UNIAN