As December draws to a close, Ukraine has been pondering the results of probably the most difficult year in the whole history of its independence. During an almost a three-hour press conference on Tuesday, Ukrainian President Petro Poroshenko also reviewed the passing year.

On elections, parliament’s work and the 2015 budget

President Poroshenko said that despite criticism, he sees his decision to dissolve the parliament and to call snap elections as absolutely justified. There is no such thing as an “aggressor’s fifth column” in today’s parliament, according to the president.

“And I hope that we have a strong pro-European coalition ready to take up responsibility in these hard times,” he said.

Poroshenko sees the ratification of the European Union Association agreement, passing the law on lustration and approving the 2015 budget as the parliament’s greatest achievements while viewing implementation of reforms and creating conditions for economic growth in 2016 as the country’s big tasks for the future.

The president also expressed support for the parliament’s approval of the state budget, despite the fact that it was voted for in such a rush. He explained that the next year’s macro indices had to be given promptly, and, without an approved budget, proper financing of Ukrainian army would become threatened as early as in January. 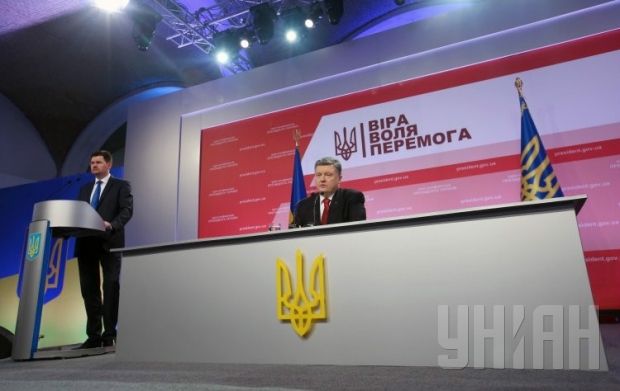 Poroshenko: “Now, we have to stabilize the economy, start new reforms” / Photo by UNIAN

Besides, the president did not rule out the possibility of additional government payments for participants of the Anti-terrorist operation, including payments for active battles.

On volunteers, the army, ‘ceasefires’ and martial law

Poroshenko admitted that the army’s organizational structure had not been ready to meet the country’s new challenges.

“There was no money,” said Poroshenko.

“In the first period, the volunteers’ contribution to defending Ukraine, its sovereignty, independence and territorial integrity was crucial… In several months, Ukraine has managed to create, and I am saying this deliberately and responsibly, one of the most effective armies on the continent.”

Recognizing that the balance of forces with the Russian army prevents Ukraine’s military from going on the offensive, the president noted that the national forces located in the village Peskiy in close proximity to the Donetsk airport have enough artillery and tanks to defend themselves and hold onto the terrorists. 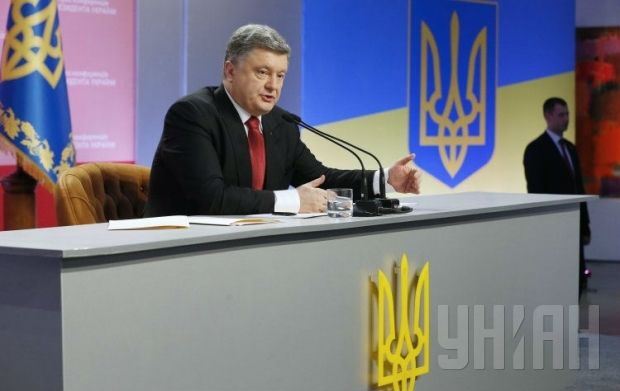 According to Poroshenko, Ukraine’s army is not strong enough for offensive action / Photo by UNIAN

Moreover, Poroshenko said that Ukrainian troops have no legal restrictions on returning fire and responding to terrorist attacks, despite there officially being a ceasefire.

“The Cyborgs in the Donetsk airport are an example,” Poroshenko said, calling the defenders of the airport by their popular nickname.

“Who prohibits them from returning fire? If they are attacked, they respond very effectively.”

Poroshenko also said that if there were further aggression in the Donbas and a collapse of the peace process, martial law would be introduced in Ukraine, although he said he said he remains in favor of maintaining peace in eastern Ukraine, based on the fragile Minsk peace deals.

“Returning the temporarily occupied territories to the Ukrainian government’s control, reestablishing Ukrainian sovereignty in these territories… is possible only under the Minsk protocol,” Poroshenko said.

Releasing 150 Ukrainian troops from captivity is also seen by the president as a sign of the value of the protocol, the result of well-coordinated steps and active efforts.

On the conflict in Ukraine’s east and the Crimea issue

Poroshenko said he believes that the key condition of the Minsk protocol – “closing the border and the withdrawal of foreign armies from Ukrainian territory will “promptly bring peace to our country.”

“Whenever the troops are withdrawn, there will be no conflict. It does not exist. It’s artificial. The first steps on freed territories vividly confirm this. This conflict is brought in from the outside, and the ones who have brought it - occupants, aggressors - must leave our country,” said the president. 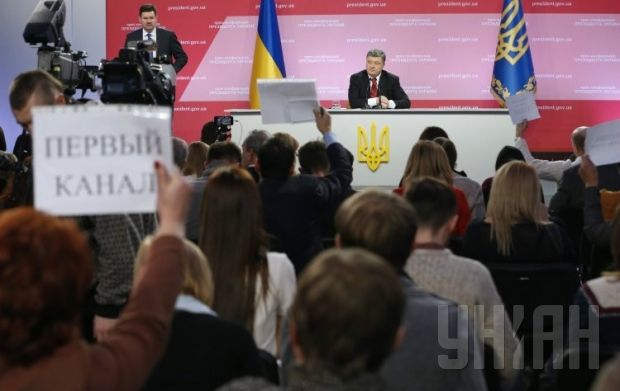 Today, in his opinion, there is a risk of the conflict freezing, despite the government’s efforts to prevent this from happening.

“Seventy percent of the Donbas residents wish to remain a part of Ukraine, and we help them via mechanisms of humanitarian aid, military policy and such,” underlined Poroshenko.

The president said he believes that the peace process is impossible without local elections held under Ukrainian law with the presence foreign observers, according to article 9 of the Minsk protocol. Only legally elected officials of the local administration can become partners in establishing local governing under the law adopted by the Ukrainian parliament.

As for Crimea, the president said Ukraine is not blockading the Russian-occupied peninsula, but implementing measures to defend the country from the terrorist threat.

Poroshenko also said that today, a procedure for the effective inspection of all types of vehicles at border checkpoints is being developed.

On business and his son, the politician

The president said he was not going to sell his TV channel.

“I will not sell Channel 5 - I never said I would. And, probably, most of the criticism [of me] comes from Channel 5,” said Poroshenko, adding that the channel meets all journalistic standards. 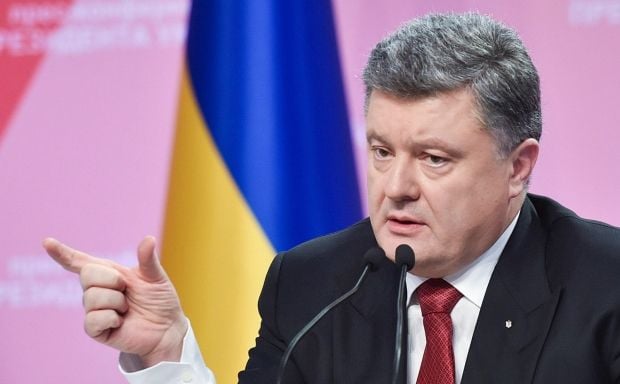 With regard to the Roshen company, which the president did promise to sell when he was running for office, Poroshenko said that he had no effective influence on the company, as he had earlier signed a deal on selling the company and transferring his authority to a trust fund, adding that the military campaign in Ukraine adds complications to the process, as four potential buyers put ending of military activity as a main condition of a successful deal. If he cannot find a buyer, he said he would be obliged to sell it by installments to the company’s management, promising that the deal would be transparent and efficient.

The president’s comments on his son Aleksei Poroshenko having been elected to parliament by a majority system were rather limited. He said that his son had gained massive support in his constituency and that he was an “independent politician with the right to make his own steps on his political path.”

On discontent with the Office of the Prosecutor General, stripping judges of immunity status and his plans for January

The Ukrainian leader expressed hope that the newly formed Anti-corruption bureau would use the best European experience of battling corruption and clearly demonstrate that there could be no one “immune” to investigation. Poroshenko said that the judges who issued illegal court rulings against the protesters of the Maidan would be held responsible after the adoption of a new law concerning reforms in Ukraine’s judicial system, adding that without such law, other anti-corruption reforms would become senseless.

“In mid-January I will introduce a bill on restricting judges’ immunity status, as an amendment to the Constitution,” the president said.

In January, Poroshenko also plans to meet with his French and Russian counterparts – Francois Hollande and Vladimir Putin, and Germany’s Chancellor Angela Merkel in Astana, Kazakhstan.

“My diplomatic year will start January 15 in Astana where… a meeting in the ‘Normandy format’ will take place,” said Poroshenko. According to the president, the foreign ministers of the participant countries are now agreeing on the agenda and drafting the summit’s resolutions. 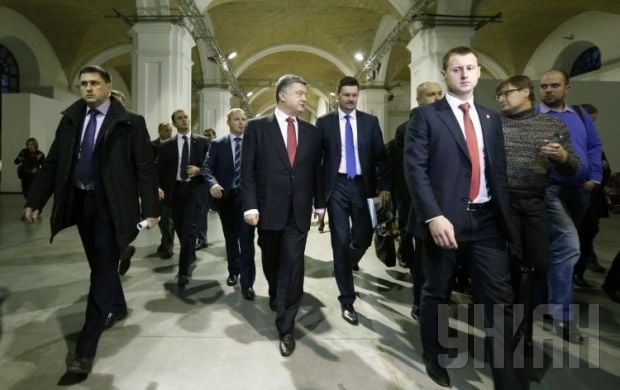 The president: “My diplomatic year will start January 15 in Astana” / Photo by UNIAN

“We remain devoted to the Minsk agreements but it is not the only format. We also consider returning to the Geneva format of talks, which would include U.S. President Barack Obama, with whom I consulted on this issue, and the new chiefs of the European Union – Jean Claude Juncker and Donald Tusk.”

Poroshenko said that the pace of this dialogue allows Ukraine to retain some optimism.