The ‘Junta’ strikes back

Four days after the shelling of Mariupol by Russia-backed insurgents, Ukrainian MPs finally gathered to vote for something that obviously should have been decided on long ago.

Before the emergency session, roaming the Parliament’s halls, MPs as usual shared their impressions on their “work in the constituencies and in the committees.”

“I spent EUR 700 to get back from Italy, and for what - I don’t get it,” one of the representatives of the Batkivschina party complained to journalists, immediately adding, as if justifying a careless statement, “All of this should have been adopted at the stage of Crimea’s annexation, now this will not work.”

By “this” he meant a statement of Ukrainian parliament’s appeal to the United Nations (UN), the European Parliament, and the Parliamentary Assembly of the Council of Europe (PACE), Parliamentary Assemblies of NATO and GUAM, foreign parliaments on the recognition of the Russian Federation as an “aggressor state,” which fully supports terrorism and blocks the activity of the UN Security Council, thus jeopardizing international peace and security.

Ukrainian parliament’s statement also includes a call for increasing pressure on Russia, including through the introduction of new sectoral restrictive measures - sanctions to stop Russian aggression and force the Russian government to implement all terms of the Minsk agreements in full. Deputies requested “to provide Ukraine with the necessary military assistance in order to strengthen the country’s defensive capabilities, with humanitarian aid to the affected civilian population and internally displaced persons, help restore critical infrastructure in the Donbas.”

In addition, the document stresses the need to end the illegal occupation of Crimea, and release all the hostages and Ukrainian citizens illegally detained in Russia, including the MP Nadia Savchenko. “[This is] to limit the powers of the Russian delegation to the PACE as long as Russia ignores the international demands of the democratic community,” Hanna Hopko, head of Parliament’s committee on foreign affairs, an MP from Samopomich party, said when explaining this part of the statement.

The Verkhovna Rada of Ukraine calls upon the international community “to recognize the fact of aggression against Ukraine, the occupation of its territory, and to strengthen the requirements for returning to the internationally recognized borders, preventing the creation of a dangerous precedent in the form of gross violations of international order and security, established after World War II.”

In the end, 271 out of 298 registered MPs voted for statement’s adoption. Besides, the bill “On Amendments to Certain Legislative Acts of Ukraine on recognition of terrorist organizations” was supported in the first reading by 270 deputies. 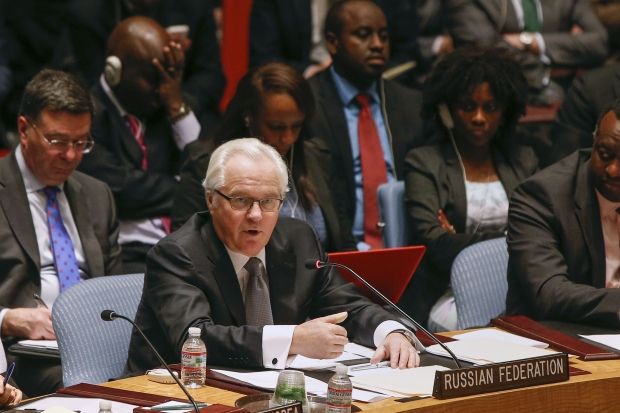 "Actually, it is our response to Ukrainian society and our foreign partners, who often say to us ‘You are asking us to recognize Russia as the aggressor, while you, yourself, fail to do so,’” said Andriy Parubiy, Parliament’s first vice-speaker after the vote.

According to MP from the Batkivschina party Hryhoriy Nemyria, the recognition of Russia as an aggressor country is fully consistent with a UN resolution, which “clearly states” the grounds for doing so. “For example, Article 3 of the resolution (33-11) states that any of the following may be considered aggression, regardless of whether there is a war or not. These are the invasion or attack by the armed forces on land or marine resources of another state,” he said.

According to him, in the first place, Ukraine has now the right to individual and collective defense in case of an aggressive attack on a UN member state until the UN Security Council performs the measures necessary for maintaining peace. Secondly, Ukraine gives international organizations a clear understanding of what is happening in the country’s east. “Like the Red Cross Committee, which is still terming the events in Ukraine an ‘internal conflict,’” said Nemyria.

Thirdly, the deputy noted that in the case of recognition of aggression the UN can use “the countering tools it possesses.”

“The fourth thing is that, in the case of Russia’s recognition as an aggressor by the UN, Russia will lose the right of veto, which it uses the full, as we are seeing,” said the MP.

“Today's decision is a direct statement of the fact that Russia is financing terrorism, plus, [it] is blocking the activity of the UN Security Council, which jeopardizes world peace and security. All other arguments are invalid... Soon, there will be the anniversary of Crimea’s annexation. Therefore, we must do what we ask of the world,” said Hopko.

Her colleague from the Samopomich faction, vice-speaker of the Verkhovna Rada Oksana Syroid also believes that the adopted documents allow Ukraine to appeal to international institutions to protect the country’s interests. “In this sense, the key thing is the recognition of the DNR [Donetsk People’s Republic] and LNR [Luhansk People’s Republic] as terrorist organizations, because no one will make them part of the negotiation process under these conditions,” she said.

However, not every member of the parliamentary coalition shares their colleagues’ optimism. According to the head of the parliamentary committee on national security and defense, MP from Narodniy Front [People’s Front] Sergei Pashynskiy, despite the legal steps taken, these decisions are not enough. “It's just a statement of fact that is already well known. We will not win the war via the appeals...” he said. 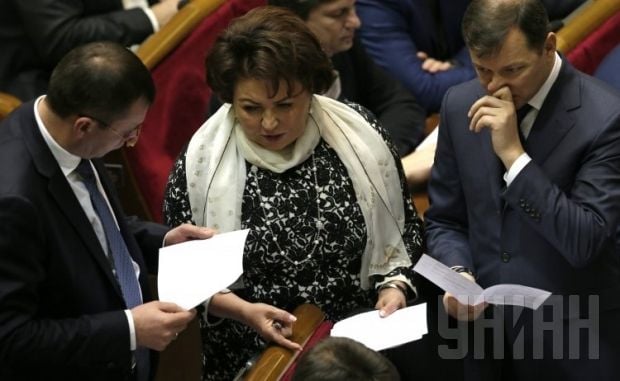 Meanwhile, the Opposition bloc stood against the introduction of these issues to the parliament and as a result they didn’t give a single vote for the adoption of these statements. Explanations of their position were nothing new and almost totally parroted the statements of Russia’s representative to the UN Security Council Vasiliy Churkin and of Russia’s Foreign Minister Sergei Lavrov. Their point is that there are no facts of arguments confirming that Russia really is an aggressor. “In order to make a decision, I need some facts, arguments,” said Tetyana Bakhteyeva, MP from the Opposition bloc, who claimed that she had seen not Russian military equipment in the east of Ukraine, but “only people’s tears and grief.” To claim that Russia supplies DNR and LNR with weapons, evidence is needed, said the deputy.

In addition, playing along with the Kremlin, the opposition bloc proposed that the Verkhovna Rada adopt a resolution providing for the start of direct negotiations with Russia and the deployment of UN peacekeeping forces in the areas of Donetsk and Luhansk regions controlled by pro-Russian militants. “It is necessary to recognize the events in Donetsk and Luhansk regions as actual military action... To hold direct talks with the Russian Federation on joint efforts to [achieve] ceasefire in order to ensure peace in Ukraine,” said Yuriy Boyko, the Opposition bloc leader.

However, voicing such proposals, the representatives of the opposition bloc apparently forgot that the Minsk agreements and the meeting in the Geneva or Normandy formats remain empty declarations, solely because of Moscow’s inaction. 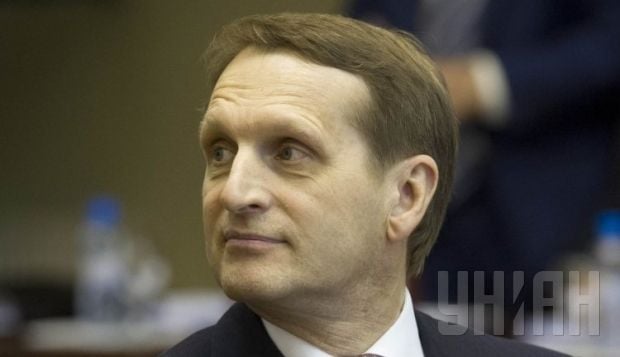 In fact, Russia responded to the move by Ukrainian parliament quite predictably. Russia’s Foreign Ministry branded Ukrainian deputies’ statement an irresponsible and thoughtless move aimed at hindering the search for a needed compromise. “This surely is a thoughtless and irresponsible statement which apparently aims to block the path to a compromise,” said Russia’s Deputy Foreign Minister Grigoriy Karasin.

The State Duma of the Russian Federation went even further, naming the decision of their Ukrainian counterparts a “nonsense.”

“Intelligent people never pay attention to gibberish,” said State Duma speaker Sergei Naryshkin, “Unfortunately, what is happening now is beyond legal framework, beyond the limits of reasonable... Recent decisions – fit in this category.”

Russia’s Federation Council was not restrained in its comments either. “They are on the path of building up confrontation, it is a politically short-sighted move,” said the vice-speaker of the upper house of the Russian parliament Yuriy Vorobyov.

“They don’t want to remember that Ukraine became a state due to Russia,” echoed his fellow member of the Council of the Federation committee on foreign affairs, and “expert” on Crimea Sergei Tsekov.

As for the reaction of the West, perhaps, the most exemplary was the adoption by PACE of the amendments to the draft resolution on the humanitarian situation in Ukraine. The text of the amendment proposed by Ukrainian delegation calls on Russia to refrain from further financing of militants in the east of Ukraine and to stop supporting illegal militant groups, and to comply with the Minsk agreements.

In general, the text of the resolution with this amendment was voted for by the majority of PACE deputies - 140. Seven voted against and eight abstained.

According to a member of the Ukrainian delegation to PACE, MP from the Poroshenko Bloc Svitlana Zalischuk, this decision indicates “an exemplary defeat of the Russian delegation in the Assembly.”

“In the document, European delegations clearly assert Russia’s annexation of Crimea, gross violations of the rights of the Crimean Tatars, Russia’s breach of the Minsk agreements, illegal humanitarian convoys, etc.,” Zalischuk said in brief comments on the contents of the adopted PACE resolution.