Member of European Parliament: Adoption of legislation on de-communization in Ukraine was inevitable.

The chairman of the Informal Group of Friends of European Ukraine in the EP, Vice-president of the Alliance of Liberals and Democrats for Europe Petras Auštrevičius, told UNIAN about the ban on communist symbols in Lithuania.

Last week, Ukrainian Parliament supported four laws on Ukraine’s de-communization. The move sparked mixed reactions within the country and beyond. However, the changes promoted by the MPs are nothing new considering the experience of some other countries. Similar steps in the legal framework were made earlier in Eastern Europe. Now, the symbols of communism are in one or another way banned in Hungary, Moldova, Latvia, Georgia, Lithuania, Poland, Czech Republic, and Estonia...

Member of the European Parliament Petras Auštrevičius elaborated on how historical decisions were implemented in Lithuania.

How has the law, similar to one adopted in Ukraine, which was voted for after Lithuania had regained independence, been enforced?

On one occasion, a foreigner from Western Europe came to a bar in a T-shirt with a red star printed on it and some lettering. It was noticed and the police were called. They explained to him why he was wrong...

We suffered both from National Socialism and Bolshevism-Communism. Therefore, we have a historical right to demand from ourselves and others to respect our history.

I would like to see some unfortunate man trying to walk with a swastika around Berlin. So why should anyone walk around Vilnius with a red star?

We have paid the price. Therefore, we have the right to demand understanding and respect for our laws. If not us, then no one will do it.

How did de-communization go in your country? Was it difficult to implement it? How effective was this process?

In practical terms, this process has been quite effective, because most monuments were removed very quickly, and there were certain places where Soviet symbols were brought to. Then it was decided to create an open museum where one can not only see those symbols and monuments, but also get information about what particular monuments depict: Who that person was and what he did... a sort of brief history lesson.

People, especially the young ones, know nothing, and such explanatory “notes” for each of the monuments is just great. Telling our children about the Soviet system is one thing, but bringing them to the museum, where they can see not only Lenin or Dzerzhinsky, but also the train car in which people were deported to Siberia, has a whole different meaning. 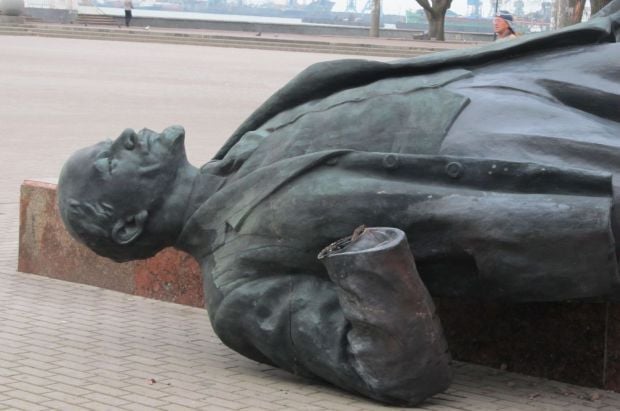 Today, the Soviet system in Russia is being brought back by political decisions / bmr.gov.ua

I think that such museum could also be created in Ukraine.

I would like the Soviet system to remain only in museums, but today we see it in Russia as it is being brought back by political decisions, although it belongs to the expositions. Therefore, it is important that Ukraine becomes one of the countries where de-communization has been complete and has become part of a museum collection.

Have you visited that museum in Lithuania?

Yes, and not on just once. I’ve been there with my sons, my wife, I’ve brought along our foreign guests. They were interested. The museum even has a dining room with iron plates from Soviet times, with aluminum cutlery, faceted glasses, vodka and herring. We must show people this “wealth” of Soviet society.

How are those who break anti-communist laws treated today in Lithuania?

There are times when it comes to criminal prosecution, court hearings are held. I won’t say that this happens every month now. It used to happen more regularly until people realized that it was not worth risking. There are government bodies that oversee public compliance with this law.

To this day we hold discussion on four monuments on the bridge in the center of Vilnius [there are sculptural groups on the Green bridge in Vilnius in the style of socialist realism – “School-aged children”, “On a Peace Watch”, “Agriculture”, “Construction and industry “ – UNIAN]. The new government promises that they will be removed. On March, 11, on the anniversary of the restoration of independence, Soviet symbols were removed from the main bridge in Kaunas. They were publicly dismantled and they will be taken away to a museum. These symbols are disappearing, and people don’t mourn for them.

As for the Ukrainian law, it is timely or late?

It is inevitable. It’s inevitable for many countries, especially for those who have suffered both from National Socialism, and Communism-Bolshevism. So I see it as a logical step toward the de-communization of society.

We must understand that this process won’t be completed overnight. This should be done publicly, in a civilized way. This is the lesson of history.

Ukraine has its own heritage, its own leaders, political and cultural figures whose names can be given to streets or squares. Also a clear schedule is of great importance: when and where the names are to be changed, or monuments dismantled.

I would note once again that it has to be done with discussion, involving the public, rather than at night. I read that some unidentified men have already demolished some monuments in Kharkiv. But this should be done publicly involving local authorities and the youth – as they ought to comprehend the changes and realize why this is happening. This is not barbarism or revanchism, it's just the result of internal changes in society, and it should be explained to the people why this is being done. That’s the way monuments were removed in Lithuania. 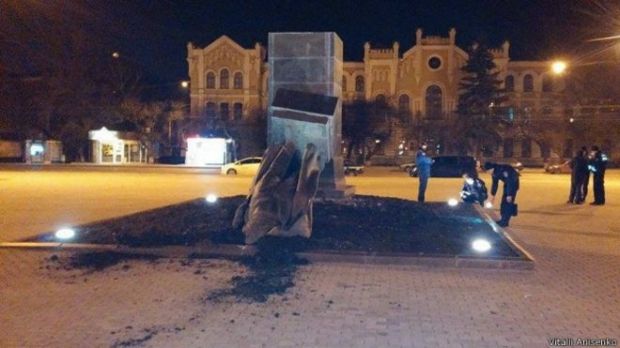 Dismantling a monument to a leader of the revolution does not always equal de-communization of society. The main thing is that people must be part of these changes. This is important. They must become free from Soviet ideology.

And what about the symbols of the Second World War? I mean, the veterans’ medals with Soviet symbols?

These medals honor personal engagement. Even if veterans wear these orders several times a year, we do not perceive this as a problem. There are anniversaries which everyone understands. We must follow a pragmatic approach.

But if a person deliberately raises a red flag over his house – that’s something different.