Ukranian President Petro Poroshenko and his French colleague Francois Hollande held talks in Paris; the United States may increase its participation in the settlement of the Donbas conflict; and statements from Russian officials are becoming more and more absurd. 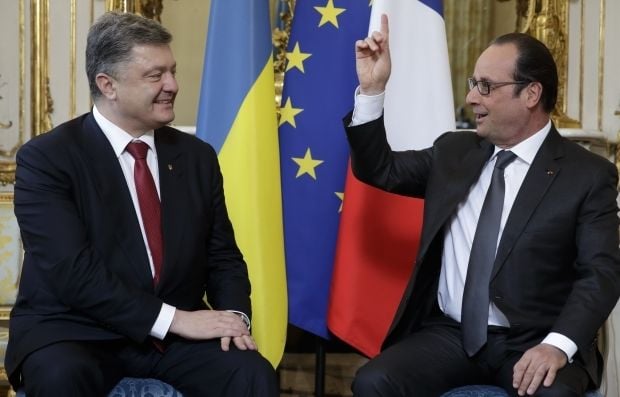 French-Ukrainian relations have traditionally been in the shadow of the bosom friendship between Moscow and Paris. However, the participation of French President Francois Hollande in the settlement of the conflict in the Donbas has melted the ice of mistrust between two largest European states somewhat. Unfortunately, in contrast to the early 1990s, Ukraine is not often compared to France today. So Ukrainian President Petro Poroshanko’s logic of lavishly paying compliments to his French counterpart is clear: Today, Kyiv must prevent the weakening of European sanctions against Russia, and Paris is a key element in this regard. Although the French president is not as unwavering as his Polish and Lithuanian colleagues, his support for Ukraine these days is important. An interesting echo of the meeting at the Elysee Palace was the signing of an agreement between Ukraine’s Energoatom and the French company AREVA on the supply of enriched uranium.

Also while in Paris, the Ukrainian president announced future plans for holding a referendum on Ukraine's accession to NATO. NATO Secretary General Jens Stoltenberg got Poroshenko’s point and made it clear that the Ukrainian bid will be considered fairly quickly if submitted. There is no doubt that Washington’s position on this issue will be very important. But the Ukrainian government should not rely solely on its strategic partner across the ocean. The lessons of 2008 should be remembered, when the failure of an effort to get the Membership Action Plan had serious political consequences.

In the meantime, an unprecedented large-scale military exercises involving nearly three hundred U.S. soldiers and Ukrainian troops from the National Guard have been launched in the western Ukrainian Lviv region. The Russian Foreign Ministry has already expressed its usual concern, as if they forgot how far the Yavoriv Training center is from the area of the anti-terrorist operation. But the Kremlin is much more anxious about the statement by U.S. Ambassador to Russia John Tefft about Barack Obama’s readiness to join in the “Normandy format” negotiations.

Russia has to respond to this diplomatic allusion somehow, but so far its government doesn’t radiate openness and constructiveness. Moreover, Russian is making statements that demonstrate Moscow’s unwillingness to compromise. Is there any other way to interpret Russian Prime Minister Dmitry Medvedev’s comparing the annexation of Crimea with the fall of the Berlin Wall in terms of irreversibility of changes? And what about Sergei Lavrov’s appeal to the Ukrainian authorities to abandon the idea of a unitary state and “Ukrainization” of the country? The failures in the perception of the true situation by the Russian establishment are striking. Chechen President Ramzan Kadyrov then saying he would allow his security officials to open fire on Russian law enforcement officers if they carry out special operations without agreement with the local police topped the cake of absurdity.

The logic of Russia's actions in relation to Ukraine’s pro-European stance was correctly interpreted by the representative of Ukraine to the EU Kostyantyn Yeliseyev. An experienced diplomat, he stressed that the Kremlin wants to obtain rights to conduct internal reforms in Ukraine. This once again confirms the thesis about the Moscow’s fears of any prospects of a successful Ukraine. The EU has reaffirmed that it would no longer postpone the introduction of a free trade zone with Ukraine. Finally, we must note that the European Commission has accused Russia’s energy giant Gazprom of abuse of monopoly in the markets of individual EU countries, and now the company is facing devastating fines. Gazprom’s days as the Kremlin’s energy-sector bullyboy could be numbered.