Ukrainian interest. Surprising Merkel, shuttling Kerry, and skepticism ahead of the Riga summit

Angela Merkel's Moscow visit right after grand Victory Day celebrations was seen as a cold shower for the Russian leadership. The German chancellor branded the annexation of Crimea as criminal and threatening European security. This statement was neatly cut out of the broadcast version of the joint press conference by the Russian TV, and also of the translation on the Kremlin’s official Web site. But the fact remains - Merkel's position was announced in Moscow, as well as her willingness to pursue efforts towards the restoration of the territorial integrity of Ukraine. This was a rather spicy comment considering Merkel’s assessment of Russia’s annexation of Crimea.

It should be noted that the Bundeskanzlerin did not treat the Ukrainian president in Berlin to a joint press conference of the same kind. While in the German capital Poroshenko limited himself to a statement on a lack of progress in the demilitarization of the Donbas and called for observance of the Minsk ceasefire agreements signed three months earlier. As has been reported, all parties to the conflict had been calling for such observance, but each of them sees the process of implementing the truce their own way. A meeting of Ukrainian and French presidents in Aachen, Germany was quite a unique diplomatic move, although no foreign political breakthrough was achieved. 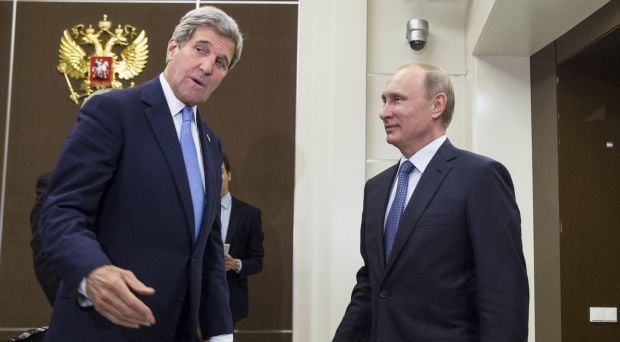 The four-hour-long talks of U.S. Secretary of State John Kerry with the Russian President Vladimir Putin in Sochi raised concerns among the Ukrainian political establishment. Perhaps, the assessments of Kerry’s diplomatic activity were too one-sided and emotional. The thing is that diplomats have to engage in dialogue, and the United States cannot afford to just act disgruntled toward Russia. Also at the summit of NATO foreign ministers, during which the meeting of the Ukraine - NATO Commission also took place, Kerry stressed the need to maintain sanctions against Russia for the sake of peace in Ukraine. By the way, the alliance's position in relation to the Donbas crisis, as befits a military-political bloc, seems to be more clear than that of the EU. NATO Secretary General Jens Stoltenberg has repeatedly stressed that Russia must stop supporting the insurgents in the Donbas. Victoria Nuland rushed to calm down the Ukrainian establishment, not only by passing some nice messages from the State Department to Ukraine’s top officials, but also having a meeting with Sergei Lyovochkin.

Bronislaw Komorowski, who lost in the first round of Poland’s presidential elections to the candidate of the “Law and Justice” party Andrzej Duda, held a small workshop session for Ukrainian politicians. The acting president of Poland has promised to hold a referendum on adjusting the political system on the basis of proposals by Paweł Kukiz who came third in the elections on May, 10. It is interesting to see, whether this will help Komorowski turn the tide in the electorally divided state.

Meanwhile Ukraine, says goodbye to its illusions about the Eastern Partnership Summit in Riga, which is to be held next week. Ukraine’s representative to the EU Kostyantyn Yeliseyev, who had failed to become the new deputy prime minister for European Integration, voiced some skepticism. He pointed out that some EU members should prepare more actively for the Riga summit and did not exclude the possibility that the meeting will not result in the adoption of a final declaration.