The G7 States have reaffirmed their readiness to strengthen sanctions against Russia if there is escalation of the Donbas crisis. Ukraine’s PM and minister of finance saw some success while visiting the United States. And Putin isn’t fighting his addiction to top level manipulation. 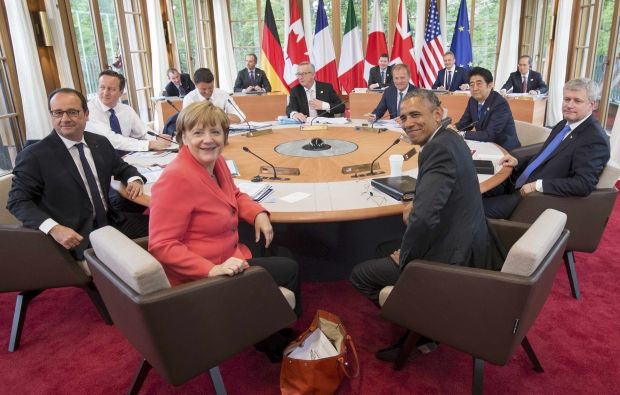 For a second time that the annual G7 meeting has been held without participation of the Russian Federation. Meanwhile, on their way to the summit in Bavaria, Canada’s and Japan’s prime ministers made a stop in Kyiv, where they expressed readiness to support thecountry on its path of reform. While Stephen Harper's position regarding Ukraine seems consistently positive, the visit of Shinzo Abe is seen as a small diplomatic sensation. But the main event took place on Bavarian soil, where the leaders of the civilized world agreed to be prepared to strengthen sanctions if there is an escalation of the Donbas crisis. The head of the European Council, Donald Tusk, said that sanctions against Russia will not be weakened. He announced that they may be strengthened earlier ahead of the EU summit. Is it any wonder that the Russian president called the G7 a “club for interests.”

Meanwhile, Vladimir Putin tried to compensate for his increasingly obvious international isolation with a visit to Rome, where he has many political friends. Right before his departure,  the Russian president exchanged a few words with one of them - disgraced ex-prime minister Silvio Berlusconi, who is now enjoying political retirement. The main interlocutor of the Russia’s leader was Pope Francis, and we should pay special attention to their meeting.

In contrast to Joseph Stalin, Putin is not interested in how many divisions the Catholic leader has around the world. But he is well aware of how important today conversation is with a world-renowned authority. However, the Russian media have once again failed to change the paradigm of propaganda to something more appropriate: According to the comments by the Kremlin-sponsored TV channel Russia 24, both Putin and Pope Francis share the same views in regard to the Donbas conflict.

Ukrainian Prime Minister and Minister of Finance visited the United States, where they held rich and fruitful talks. U.S. Vice-President Joe Biden’s willingness to meet with Ukrainian visitors almost immediately after his son’s funeral shows that Washington is still really interested in what is happening in our country. Christine Lagarde - IMF Managing Director has also sent an encouraging signal, having assured that the fund will continue to provide Ukraine with loans, even in the case of default. The fact of the effective cooperation between Arseniy Yatseniuk and Natalie Jaresko is also worth noting. During the visit, the minister successfully put her connections in the investment business to public service.

Meanwhile, Samantha Power, the U.S. permanent representative to the UN Security Council, has visited Ukraine to see with their own eyes what is happening in the country. The U.S. diplomat stressed that Russia had underestimated Ukrainians’ resilience in their fight on the two fronts - against the aggressor and corruption. Power reaffirmed that the United States has not forgotten about the annexation of Crimea and would not lift sanctions against Russia until this territory is returned to Ukraine.