3.5% of Ukraine's population is under poverty line in terms of absolute criteria, nine people were injured in a shootout in Mukachevo, 350 out of 400 Ukrainian language classes in Crimean schools have been closed up, 7,062 Ukrainian military were awarded orders and medals during the Anti-terrorist operation. 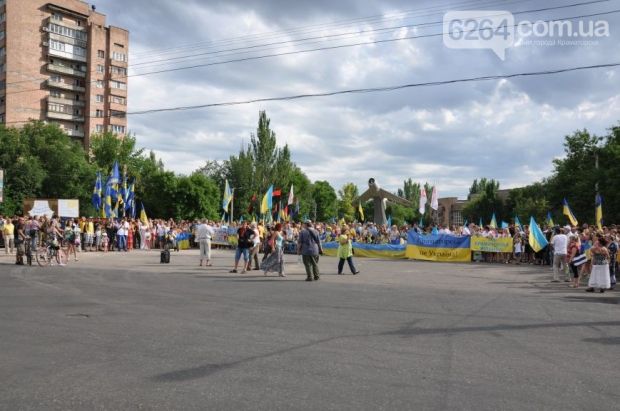 Kramatorsk and Slavyansk celebrate the anniversary of liberaition / 6264.com.ua

1 Bison landing craft, 6 warplanes, 8 helicopters, 18 MLRS units, 23 tanks, 28 modern APCs and over 27,000 small guns were exported from Ukraine in 2014, according to the State Service for exports control.

2 eastern Ukrainian cities – Kramatorsk and Slovyansk – marked the anniversary of their liberation from Russian-terrorist occupants.

3,5% of Ukraine’s population is under the poverty line in terms of absolute criteria, reads the “Millennium Development Goals. Ukraine. 2000-2015” national report, drafted by the Institue for demography and social studies of the National Academy of Sciences of Ukraine and the Economy Ministry  in cooperation with the UN Development Program in Ukraine. In 2000, it was 11,9%.

6 peat fires on the area of ​​7.7 hectares were recorded in Kyiv region, according to the Main Department of the State Emergency Service of Ukraine. Rescuers are fighting fires in Borodyanka, Ivankiv, Vyshgorod, Kyiv- Svyatoshinsky areas and in near the city of Irpin.

8% of Ukrainians support the idea of ​​federalization, according to survey by the Razumkov Center, conducted in May. Another 35% support a unitary state with the expansion of the region’s powers, 19% favor maintaining the current model.

9 people were injured in a shootout in Mukachevo, according to the Health department of the Transcarpathian Regional State Administration. Seven victims are being treated at the Mukacheve Central regional hospital – a guard, a criminologist, and two officers of the special forces, and three bystanders. The guard sustained the most complex injuries, according to doctors. He was shot in the head. Two more law enforcement officers are being treated at medical institutions in the city of Uzhgorod.

10 Ukrainians were released from the militant captivity, according to the presidential administration. Among them are two civilians and eight soldiers. At the same time, according to President’s Commissioner on the peaceful settlement of the Donbas conflict, 245 Ukrainian citizens are still held captive by the militants. In addition, 11 citizens of Ukraine are held in Russian prisons.

16 higher educational institutions of the third and fourth level of accreditation, as well as 10 research institutions, have been evacuated from the Donbas, according to the parliamentary committee on science and education.

25 attractions around the world were included in the list of the UNESCO World Heritage, according to a decision by the World Heritage Committee adopted at its 39th session in Bonn. In particular, the sights of Singapore and Jamaica appeared on the UNESCO list for the first time ever.

42% of Russians are ready to give up their freedoms of speech and travel abroad if the state guarantees them a decent wage and decent pensions, according to the survey by Levada Center. 49% spoke against such restrictions, another 11% were undecided.

117 Russian artists who may pose a threat to Ukraine’s national security, were put on the list, drafted by the Ministry of Culture and submitted to the SBU.

The wall which aims to prevent infiltration of "Islamic state" fighters in Tunisia will be 160 km long, according to foreign media citing the prime minister of Tunisia. The construction of the wall is planned to be complete in the end of 2015.

350 out of 400 Ukrainian language classes in Crimea were closed up after the Russia’s annexation of the peninsula, according to a Crimean center of business and cultural cooperation “The Ukrainian House”. The only Ukrainian gymnasium has been “russified” according to the activists.

At least 500 companies suspended securities trading on the Chinese stock markets, foreign media reported. This week, the index of the Shanghai Stock Exchange fell by 6.4% and the CSI300, which includes major Shanghai and Shenzhen companies, fell by 6.7%. Since the middle of June, shares of Chinese companies have plunged by 30%.

1,930 Ukrainian troops were killed in the Anti-terrorist operation in eastern of Ukraine throughout the period of the conflict, according to the department of social and humanitarian policy of the Ministry of Defense. Families of 1,593 victims received a one-time allowance in the amount of UAH 609,000.

A stone complex of the early Bronze Age, aging approximately 4,300 years, was discovered on a Khortytsya island near Zaporizhya, archaeologists reported. According to the scientists, a burial site of a priest or, perhaps, of a tribal leader, dates back to the third century BC.

6,000 Russian citizens have been denied entry to Ukraine by the State border guard service in the first half of 2015, the Service reports. The total of 25,000 foreigners was denied entry in this period. 11,000 persons were detained for illegal border crossing.

7,062 Ukrainian troops were awarded orders and medals for participation in the ATO, with 1,344 of them - posthumously, according to the Defense Ministry. In particular, two soldiers were awarded with the Order of Merit, 866 participants of the ATO were awarded the Order of Bohdan Khmelnitsky of various classes, 553 troops – the Order of Courage, 67 - the Order of Danylo Halitsky, 3,203 - the medal of Defender of the Fatherland.

140,000 tons of food, almost 170,000 liters of beverages and 31,500 packs of tobacco products has been detained by Ukrainian border guards along the demarcation line in the ATO zone in the first half of 2015, reports the State border guard service. The total value of detained goods amounts to UAH 223 million.

There are 1,369,644 internally displaced persons in Ukraine, according to the Ministry of Social Policy. Of 415,000 families who have applied for financial aid, 335,000 families received it. In total, they received UAH 1.62 billion.

The US will allocate $15 million in aid for the organization of Ukraine’s brand new patrol police, according to the US Embassy in Ukraine.

The Ukrainian government has decided to create by the end of 2015 a stabilization energy fund worth $1 billion, to buy natural gas from abroad, according to a government resolution. According to the document, Naftogaz Ukraine is to form the fund, in accordance with the agreements concluded with foreign creditors, under the state guarantees.