The sixth wave of mobilization ends on August 17. Meanwhile, conscription offices, used to a Soviet style of “implementing the plan,” come up with different tricks in order to "entice" the citizens who could potentially be mobilized into the armed forces.

In different regions, the mobilization is carried out in different ways. In the Lviv region traffic police patrols were looking for draft dodgers among motorists. In Zakarpattia region, after the Mukachevo shootout, the conscription papers were handed to smugglers. In Ukraine’s capital Kyiv, the military came up with mail notifications.

Kyiv residents often see letters in their mailboxes, signed a district military commissioner, saying that they are being accused of evading mobilization, and therefore, they will be prosecuted under Article 336 of the Criminal Code (evasion of mobilization) and face two-to-five years’ imprisonment, as they have been put on a single register of citizens who evade draft and military service. It is also stressed in such letters that the copies have also been sent to the District Prosecutor's Office and the Interior Ministry. So, the military commissioners demand to "report immediately" to the local conscription office to explain "the reasons for non-arrival." 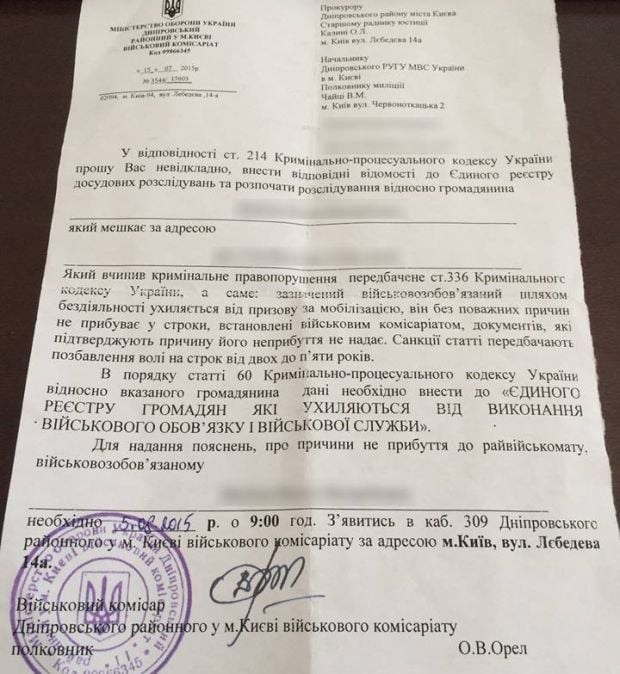 The thing is, many of those who received such letters in Kyiv, either had not received their draft papers at all, or have already visited the conscription office and the medical examination but ... still are considered deviators.

A brother, of Yuriy Nehrey, living in Kyiv, has received his draft papers back in June. It was quite a surprise that, after he had already passed a medical examination, he found a notification in his mailbox, stating that he faced imprisonment, and his case was forwarded to the prosecutor’s office. "The next day he went to the draft board with this piece of paper, and there he was told not to worry, as they sent those notifications to everybody (!) because of the shortage of conscripts. Perhaps, someone would come,” says Yuriy.

Mobilization without breaking the law

However, conscription offices fail to engage in such cordial conversations with the media. The employees of the district draft boards get embarrassed and do not confirm that they have initiated such notifications. Anyway, Parliament Commissioner for Human Rights confirmed the information that military enlistment offices had been sending such “letters.” “The Commissioner’s Office is concerned, and we will be drafting a public statement on this issue. We will also contact the Prosecutor General's Office and the Defense Ministry to clarify, if there is a single register of citizens evading draft and military service, and, if so, how this is consistent with the law on personal data protection. If not, we will ask [the PGO] to investigate into the actions of the relevant military conscription offices," said Mykhaylo Chaplyha. 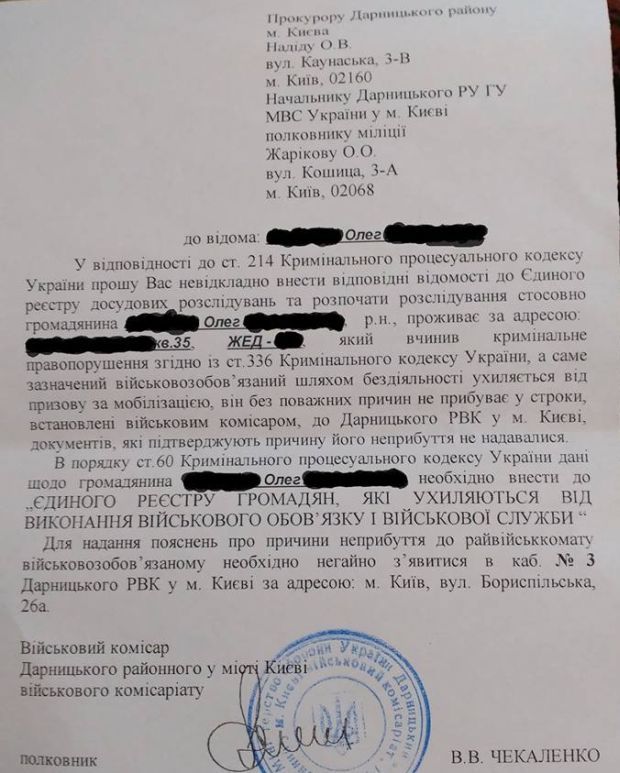 Actually, the Ombudsman’s Office claims they know nothing about the existence of any such single registry, stressing that there is a law on the protection of personal data, while maintenance of any registers is always associated with the processing of such data. "I do not know any laws that would provide for the establishment of a single registry of citizens who evade draft. The only thing that these letters can refer to is a so-called register of conscripts – the idea which has not even been submitted by the Defense Ministry to the Ukrainian Parliament for consideration in a form of a bill," he said.

At the same time, lawyers point out that the fact of evasion still has to be proven. Intent is a “prerequisite for liability under this Article (art. 336 of the Criminal Code),” says Hlib Dubrov, a lawyer, “In the absence of evidence, the criminal proceedings must be closed."

Lawyers also believe that the conscription offices might be soon hit back with the law suits, being accused of untrue report of a crime. Lawyers say that the individuals, who had not received draft papers but received threats of a possible criminal prosecution instead, have the right to defend their honor and dignity in court. Moreover, they can claim financial compensation from the state for moral damage.

The General Staff did not deny that the problems with the mobilization do exist; moreover they are aware of such mail notifications in Kyiv. However, the top military officials recommend the citizens to examine such letters carefully, as they suspect most of these notifications fake. The speaker of the General Staff of Armed Forces of Ukraine Vladyslav Seleznyov said that, given the summer period, holiday season and farm work, there really is some difficulty in meeting the objectives of the sixth wave of mobilization. In this context, citizens receive information letters as "both summons and any other kind of notification oblige the citizens to arrive at a recruitment office.” "But there are also fake notifications, sent in order to sow popular discord," he said and added that such documents have printed, rather than wet, stamps, which is illegal.

At the same time, responding to a question whether the military conscription offices have the right to threaten the citizens with criminal prosecution, Seleznyov said that "it is not the competence of the military commissioners."

The Office of Ombudsman also points at some inconsistencies in the text – misspelled words and such.

“We can conclude that the problem is systemic," said the Office, pledging to deal with the issue.

In turn, the press officer of the General Staff Oleksiy Mazepa noted that "we are currently conducting an investigation to find out what these letters are and where they came from." "If individuals receive any notifications, offering to come to the military conscription office, they are advised to go there and clarify their credentials," he added. 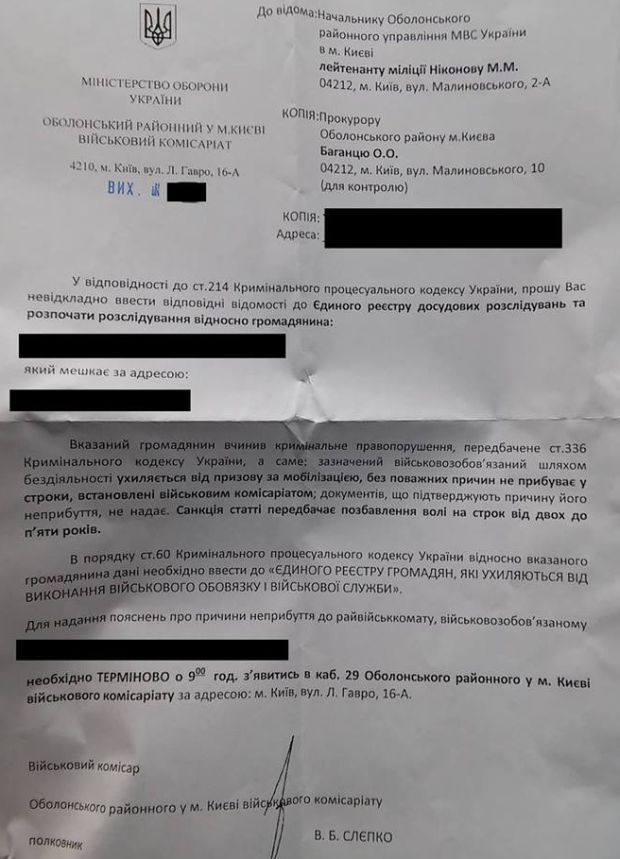 By the way, presidential advisor Yuriy Biryukov, who was the first official to address the issue, also suggested that the notification he had got a hold of is falsified. On his Facebook page, Biryukov tells a story of a Kyiv resident who was also surprised to receive such notification, as he had not received any summons previously. Having come to the conscription office, he was told by the military officials that the notification was a fake.

It is interesting that Biryukov relates this particular notification with the fact in the person’s mailbox the leaflets were thrown in, urging to “burn tires,” go out on the next Maidan and vote for a particular party in local elections. Considering that the General Staff intends to investigate into these incidents, we would like to note that the delivery of such fake notifications was first spotted long before a new law on local elections was signed and, of course, long before the unofficial start of the election campaign. Therefore, it is rather questionable to draw parallels between the falsified draft notifications and political advertising.