A new political season opened on August 31 with preliminary parliamentary approval of Constitutional amendments with 265 votes, but also with explosions and riots near the building of the Verkhovna Rada, claiming at least one life and wounding dozens of law enforcers.

Early Monday, several rallies were planned simultaneously. For the most part, the protests concerned the president-proposed Constitutional amendments regarding decentralization of power, due to be considered by Parliament on August 31. Leaders of the protest stated that the proposed bill sets a dangerous precedent, jeopardizing the country’s integrity by providing a special status for the occupied areas of Donetsk and Luhansk regions.

Several hundred law enforcement officers, among them - workers of the Kiev police, soldiers and Titan (National Guard special forces) were just observing the scene, not being interested in serious collisions. "Anyone need a bodyguard?" a National Guard soldier jokingly asked the journalists present at the rally.

At that time, no one knew what the outcome of the first day of the new political season will be...

Despite the fact that the consultations, bidding and negotiations on amendments lasted up to the very start of the session, there was no unified position among the MPs on the proposed bill ahead of the vote. However, representatives of all parliamentary factions claimed: there will certainly be 226 votes for preliminary approval of proposed amendments.

In this context, the behavior of both factions and individual deputies was somewhat surprising. For example, Oleh Lyashko and his fellow deputies from the Radical Party blocked the presidium of the session hall long before their colleagues even came to work. Later, after the speaker opened the session with an hour delay, they created noise, joined by some other MPs, including those from Svoboda party, booing and shouting at those who tried to address the issue from the Parliament rostrum. Still, they did not actually disrupt the voting process. It suggests that the aim of the “blocking” was just creating a favorable image for the voters ahead of local elections. 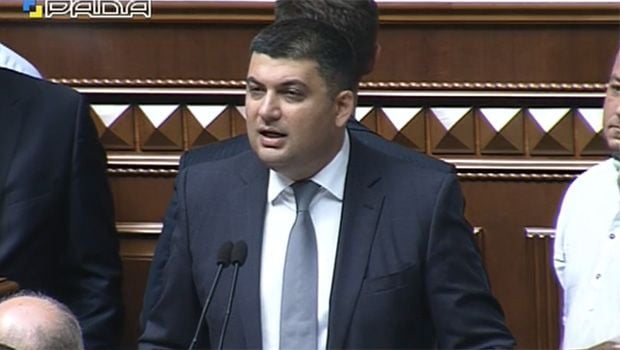 Speaker opened the session amid shouts "Shame on you!" / Screenshot from Video

Besides, speeches also stank with populism. Head of Samopomich Oleh Berezyuk described the situation in the parliament as violence, betrayal of national interests and training for Pavlov's dogs. "The Ukrainian parliament and the Ukrainian people are not supposed to be trained like that!" said Berezyuk emotionally, even citing Taras Shevchenko when closing his speech.

The head Opposition Bloc Yuriy Boyko was laconic, voicing the traditional mantra of the Regions Party for peace and saying that "we will vote for peace and the country’s development."

In turn, the leader of the Batkivshchina (Fatherland) party Yulia Tymoshenko, on the contrary, had a lot to say. Most of what she said did not concern the issue, though. As a result, the essence of her speech boiled down to the fact that Batkivshchina will vote against the amendments, thus beginning "a new process of negotiations on the amendments and the just, efficient, honest, effective way to peace."

The leaders of Batkivshchina and Samopomich stressed in their speeches that the constitutional process cannot be dependent on foreign players, even such influential powers as the EU and the United States, saying: "let them check the number of Russian submarines in their neutral waters and Russian drones, and protect themselves along with Ukraine.”

The" People's Front ", on the contrary, made the point that the impact of the vote for amending the Constitution of Ukraine" will enable our western partners to put pressure on Russia."

Parliamentary battles around the amendments are even more surprising considering the fact that the final result may only be reached with 300 votes later in December. In addition, the Parliament will also need to support a package of laws to support decentralization – a bill on prefects, on local executive bodies, amendments to the law on local self-government, etc.

But again, December is too distant, while local elections are so close. The campaign has actually started. A voter is in dire need of selection. That is why the parliamentary corps has started active work to provide a clear distinction for voters between “our guys” and “those guys” ahead of October 25.

Anyway, 265 MPs voted for preliminary approval of Constitutional amendments regarding decentralization on August 31. The next meeting (of the new, third, session) was scheduled for Tuesday, September 1. 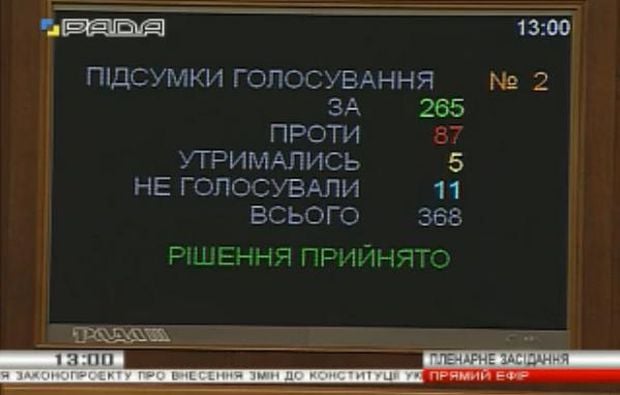 Meanwhile, a rally near the house of Parliament ceased to be peaceful. Despite the fact that there was no need for aggressive opposition, clashes erupted between protesters and law enforcement officers. Smoke bombs were thrown at the National Guard soldiers, the most active protesters started beating law enforcers with wooden sticks. Both sides of the confrontation started using tear gas from cans, the Rada security blocked the exits from the building leading to the site of clashes...

At this time, another “drama” was unfolding in Parliament’s lobby: Ukraine’s chief radical Oleh Lyashko was “eager” to save "people from police," running on camera from one closed exit to another. But "mean" Rada security had closed all the doors. Lyashko threatened to punish everyone, forgetting that another exit leading the Committee offices remained open (in fact, all MPs, the staff and the journalists, for the most part, have left the parliament building exactly through that exit). Had Lyashko any will to try to resolve the conflict on the street, rather than just secure his PR move, he would have no problem getting out through the back door, cross the road and then, of course, "saving everyone."

By the way, nothing has prevented ex-deputies from Svoboda party, who escalated the situation on the streets, from going inside the building of the Verkhovna Rada and communicating their position to former colleagues.

Instead, protesters hurled something looking like a smoke bomb at law enforcement officers in front of the parliament. The blas was so powerful, it seemed like the windows would shatter. After a moment of shock, it became clear that it was a grenade which left many wounded. Not only law enforcers, but also journalists were wounded.

First aid was provided to the victims on the spot, they were carried away in ambulances, police patrol vehicles, and private vehicles of concerned citizens. According to the adviser to the Minister of Interior Zoryan Shkiryak, nearly 100 people were wounded in the clash. Later, the Ministry of Defense confirmed that the riots in front of the Verkhovna Rada left 112 soldiers, National Guard troops and police officers wounded. One soldier later died from shrapnel wound to his heart, said military official Vsevolod Steblyuk, adding that three of the victims remained in critical condition, seven - in grave condition.

Meanwhile, leaders of protests accused the Rada leadership, as well as the leadership of Interior Ministry and of the State in clashes that had erupted. Thus, the “protesters” showed that they actually could not care less about the Constitution. One of its main provisions ensures that "everyone has the inherent right to life." It was only after two hours into the clashes when the rally leaders announced the end of protest.

In fact, the political forces that initiate protests should understand the consequences of any of their actions and take responsibility for the people that follow them. However, even after a protest allegedly ended, clashes continued, finally dissolving only about 17:00.

"Bloody Monday" resulted in the prosecutor's office opening a criminal case under four articles of the Criminal Code of Ukraine:  - Art.348 (murder or attempted murder of a law enforcement officer in the performance of official duties), P.3 Art.345 (threat of violence against a law enforcement officer), Art.293 (group violation of public order) and P.2 Art.294 (mass disorders). 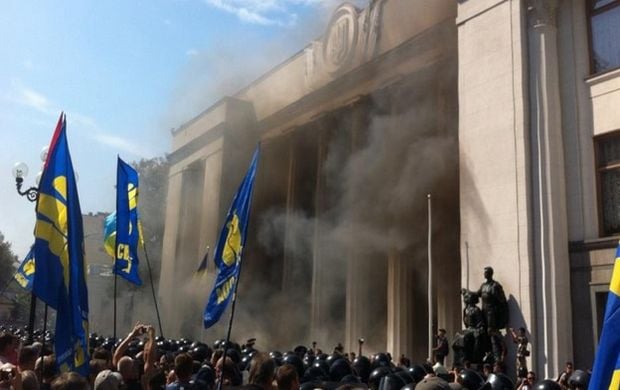 A criminal case was opened into the events of a "Bloody Monday" / twitter.com/SHuijboom

In general, the use of weapons motivated by political demands may be reclassified as terrorist attack. There hope that Ukrainians who have lived through the Donbas hostilities for over a year see the difference between a peaceful political act and an attempt to achieve political goals by force.