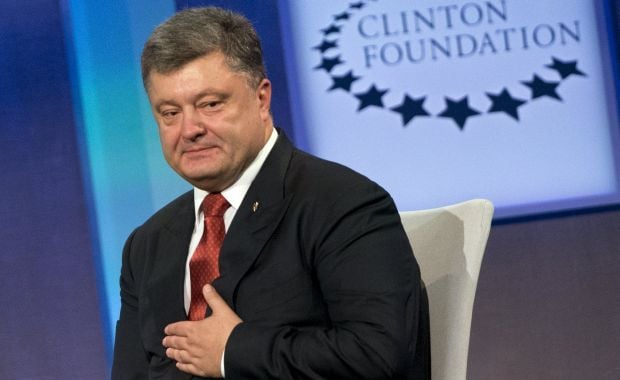 The President has not had a chance to celebrate his anniversary as he kicked off his New York visit to address the UN General Assembly. I believe that Petro Poroshenko is doomed to experience an old saying: "In Russia, czars are appointed, and everyone loves them; while in Ukraine the president is elected, but everybody hates him." The Ukrainian public revels in political debate in the format of "Zrada - Peremoga" [Win-Fail], and the scapegoat is usually the president, which sometimes can be justified, but sometimes not. However, Poroshenko remains the country’s most popular politician, which pushes him to producing more initiatives.

Parliament Speaker Volodymyr Hroisman came up with a highly controversial proposal, saying that the issue of the increase of the MPs’ and civil servants’ salaries (and of their responsibility as well) seems timely today. Apparently, he is pleased with the number of adopted bills, in comparison with the previous parliamentary convocation, notorious for constant blocking of a parliamentary rostrum. The raise after a certain time at a job is a normal practice, but it is unlikely that our lawmakers have a right to it in current circumstances, as they seem to be too careless and irresponsible in fulfilling their duties. By the way, the economic situation is also not conducive to an increase in the deputies’ wage.

The mayors and deputies of local councils, who will be elected late October, will not necessarily be much more effective than their predecessors.

At the same time, a dozen of current lawmakers will take part in the battles for mayoral seats, and it's just one of the interesting trends in these local elections. Another trend has manifested situationally of political forces showing off their oppositional posture, in particular, Svoboda and Oleh Lyashko’s Radical Party, place at the top of electoral lists their party members who are currently in jail. The tactic of using prisoners with political context is far from being a novelty, so it’s quite interesting, what outcome it will bring in the country’s capital after the Revolution of Dignity.

Geoffrey Pyatt’s public swipe at the General Prosecutor's Office with accusations of failing to fight corruption can be assessed in various ways. Ukraine’s Prosecutor General Viktor Shokin is understandably calm as an Olympic athlete, but this will unlikely last for long. When the Parliament resumes its work, new attacks on Shokin are expected, unless he prevents them by demonstrating the public a few scalps of Ukraine’s enemies.