Russian officials have been voicing Putin’s messages on Ukraine as revolvers. Ukrainian-German business forum in Berlin was accompanied by an exchange of courtesies at a government level. Standard & Poor`s rating agency has significantly increased Ukraine’s credit rating. Unexpected news have come from the US and Canada.

The lull at the confrontation line in Donbas should not mislead anyone - the conflict between Ukraine and Russia is on pause, and far from its end. Difficult negotiations with separatists in Minsk are yet another proof, as they put forward new conditions for the release of Ukrainian captives. It is clear that the militants feel the arm of the Kremlin behind them.

The Russian president has accused Ukrainian authorities in mocking the fulfillment of Minsk agreements and refusal to agree the constitutional amendments with representatives of Donbas.

In fact, Vladimir Putin does not really hide his desire to solve the Donbas equation his own way. The report on a 90% popular support seems to have made him dizzy from own success. Speaking at the Valdai discussion club in Russia’s Sochi, the Russian president accused the Ukrainian authorities in mocking the implementation of Minsk agreements and refusal to agree the constitutional amendments with representatives of Donbas. However, Putin chose not to mention the “puppet” essence of these representatives. A rather good illustration of his psychological portrait is his claim that Viktor Yushchenko’s rise to power was illegal, and also that Ukraine is trying to set up another Libya or Iraq in its territory. Interestingly, the head of Russia’s Presidential Administration, Sergei Ivanov, and Federation Council Speaker Valentina Matviyenko (born in the Ukrainian town of Shepetivka, by the way) also broke out with anti-Ukrainian statements. 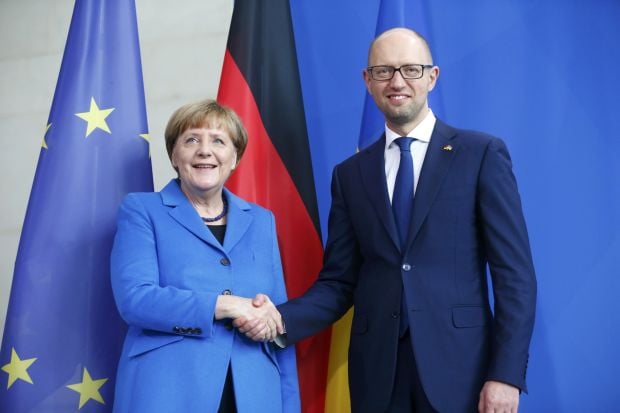 A different tone prevailed in Berlin during the Ukrainian-German Business Forum. Angela Merkel and Yatsenyuk radiated ability to find common language. The Ukrainian prime minister did not lose his chance to show confidence in a possibility of the development of bilateral relations in the economic sphere. One of the notable outcomes of the visit of the Ukrainian government delegation to Germany was the signing of a $300 million loan agreement between Naftogaz Ukrainy and the European Bank for Reconstruction and Development for the purchase of gas.

If Prawo i Sprawiedliwosc obtains full power in the neighboring Poland, the official Kyiv will have to show willingness to listen to the position of Warsaw.

Germany is an important, but not the only, influential partner of Ukraine in Europe. In the context of the forthcoming elections in Poland, it can be assumed that if Prawo I Sprawedliwosc obtains full power in the neighboring country, the official Kyiv will have to show willingness to listen to the position of Warsaw. Otherwise, the strategic relationship between our countries may drop several levels down, although Poland will definitely not totally refuse from supporting Ukraine.

Another important event was almost left unnoticed. Standard & Poor`s rating agency has significantly increased Ukraine’s credit rating, thus noting the successful negotiations of the Finance Ministry with the numerous creditors and establishing the fact that there is no threat of default. This step seems important in the context of the expected battle between Ukraine and Russia over a $3 billion "Yanukovych loan."

Interesting news have come from overseas. Barack Obama's veto of a bill providing for the $300 million in military assistance to Ukraine was enthusiastically met with the adepts of the idea of our foreign partners “giving up” on Ukraine. But it’s really not about Ukraine, but rather about the struggle between the Democrats and the Republicans. Victory of the liberals led by Justin Trudeau in Canada’s elections aroused similar feelings. But the leader of the Liberal Party has made it perfectly clear that Ottawa would not turn from the path of supporting Ukraine.