Ukrainian interest. Revival in Ashgabat, obscurantism in Moscow, and hints from overseas

Ukrainian President Petro Poroshenko and his Turkmen counterpart Gurbanguly Berdymukhammedow made another attempt to revive the Ukrainian-Turkmen relations. In Russia, on the falsified pretext, the library of Ukrainian literature is being destroyed. U.S. Ambassador to Ukraine Geoffrey R. Pyatt allows himself some quite an undiplomatic language. 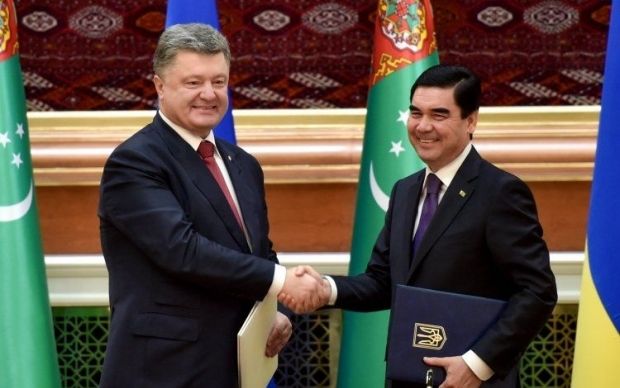 Ukraine intends to seek new markets for its goods in the light of Russia closing its market, according to Petro Poroshenko who visited Turkmenistan this week. Ukraine’s relations with the Central Asian states are developing with varying success. One thing is certain: although Turkmenistan declares readiness to restore oil and gas supplies to Ukraine, the existing transit corridors via Russian territory will make it extremely difficult. On the other hand, the interest of Ukraine to export not only heavy machinery, but also construction services to the east appears to be stable and meaningful.

Meanwhile, Russia is in full gear depriving bilateral relations with Ukraine of their former veil of fraternal friendship. The closure of the Moscow-based Library of Ukrainian Literature under the pretext of the presence of “banned books” there seems to be an example of the XX century obscurantism, but, unfortunately, it is happening today, in the capital of a nuclear power. It is significant that the hunt for the books took place against the backdrop of performance by Nicolas Sarkozy, so loyal to Putin that he exchanged part of his political reputation for the honorary degree of MGIMO [Moscow State Institute of Foreign Relations]. But Russia would not welcome every foreigner… The Federal Migration Service of Russia intends to restore order with the status of Ukrainians in the territory of the Russian Federation, as early as November. It’s possible that migrants will be used as a factor in destabilizing the situation in the east of Ukraine, where a fragile calm has settled.

Excerpts from an interview with the senator from Poland’s election-winning Law and Justice party, Jan Zaryn, sparked discontent in Ukraine, as the senator urged Ukrainians to admit guilt for the genocide of Poles in Volhynia during World War II and reminded that the western Ukrainian city of Lviv is “crucial to the Poles.” In fact, such information vaccination might even be useful, as today a rather conservative party has come to power in in Poland, and it is focused on protection of the interests of the Poles, not provision of legal services to Ukraine. The sooner Kyiv understands the necessity of forming a pragmatic agenda with our strategic partner, the more effective the Polish-Ukrainian relations will be.

Against the background of adverse tug of powers between the General Prosecutor's Office and the Foreign Ministry, the position of U.S. Ambassador to Ukraine Geoffrey R. Pyatt is quite showing. He praised anti-corruption efforts of General Prosecutor’s deputies - Vitaliy Kasko and David Sakvarelidze. In addition, the American diplomat stressed that Ukraine needs to fight corruption more effectively, as there’s no way forward without such a fight – not just in terms of the country’s transformation, but in terms of the financial aid from the West. However, there were some good signals as well. According to IMF’s Managing Director Christine Lagarde, the Fund is ready to alter conditions of lending, in order to continue cooperation with Ukraine.