Russia’s ex-PM Mikhail Kasyanov: Putin and his regime are severely affected by sanctions. Sanctions work, they really do.

UNIAN sat down with one of Russia’s opposition leaders, former Prime Minister Mikhail Kasyanov, to learn how the opposition sees the prospects for resolving the conflict in eastern Ukraine. 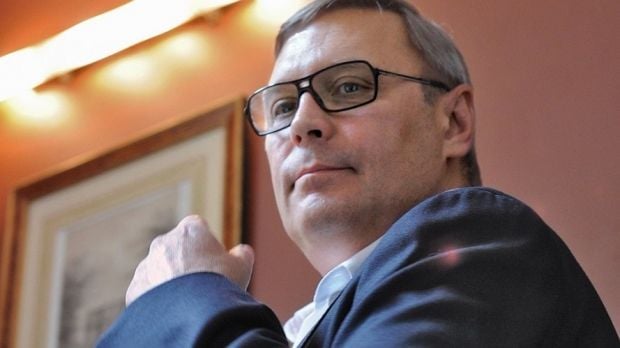 In Russia, any discussion, whether it is an international conference or the analysis of internal problems, sooner or later, touches the Ukrainian issue. Off the record, many supporters of the Russian authorities as well as a few opposition members believe that it is the aggression against Russia’s neighbor that has put an end to the era of "Putin's stability." It all started with the annexation of Crimea and escalated with the invasion of Donbas. The Russians are becoming more aware that destabilizing Ukraine comes with a great cost.

The deadline of the Minsk agreements is about to expire, and sanctions against Russia may be extended if pro-Russian militants in Donbas do not comply with these agreements. UNIAN spoke with Russia’s ex-Finance Minister, one of the leaders of the Russian opposition, Mikhail Kasyanov, to find out whether there is a way out of this vicious circle, and what it is supposed to be like.

Mikhail, is it possible, in your opinion, to perceive the Minsk format of settlement as the best one?

My party and I welcome the Minsk agreements because they allowed to stop the war and the killings. This is the main achievement. Of course, there are problems in this document, as there it stipulates a faulty sequence of actions. But there is one important factor:  the agreements declare that the final outcome must be the transfer of full control over the territory, including the border, to the Ukrainian government. We look forward to the implementation of these provisions.

Russia should implement its part of the agreements, including the provision to stop the escalation. We already see that the leaders of various armed groups in these unrecognized territories were replaced by the more moderate people, more bureaucrat-type. The people who could disappear within one day, upon the order from the top.

Basically, I see that Putin and his regime are ready to end the conflict in Donbas. The question is that they demand something more from the West. If the West continues to insist on full implementation of the Minsk agreements, with the end point of transferring control over the border and the territory to the Ukrainian authorities, the current Russian authorities may agree. This is too heavy a burden. Putin and his regime are severely affected by sanctions. Sanctions work, they really do.

You said that the sanctions seriously affect Russia. What is the cost of the occupied Donbas for Moscow?

As I understand it, it’s not the budget money that is allocated, but from various funds. Accurate data are not available, so we can only speculate.

And how real is the so-called "Morel's plan," the essence of which is holding the elections in the occupied Donbas without Ukraine’s participation of Ukraine and Kyiv having to subsequently recognize their results?

I don’t consider such a plan. It’s some kind of “perpendicular” decision. I don’t take it seriously.

In your opinion, are any of the new formats of talks necessary on resolving the Donbas conflict? Amid undeclared Russian occupation Ukraine can’t recognize the elections in the occupied territories...

I think the issue of the format of talks has been exhausted. We have the Minsk agreements, and everyone is waiting for Russia to implement them. Ukraine has been criticized, but it has been implementing them. We are waiting for the final step - the transfer of control over the border to the Ukrainian authorities. This is the end point of the Minsk agreements. Therefore, an ongoing discussion, including in the European Union, on whether the sanctions will be lifted due to the fact that Putin is needed in the fight against international terrorism, is not relevant.

There are reasons that prompted the European states to impose sanctions, and, until these reasons are eliminated, I believe that anti-Russian sanctions will be extended.

What is exactly wrong with the sequence of actions stipulated in the Minsk agreements?

I wish not to go deep into details. Indeed, there is a wrong sequence of performing many actions, including on the terms of holding elections. Of course, the elections must be held under Ukrainian law and under the control of the Ukrainian authorities. It shouldn’t be that first go the elections, and not legitimization of gangsters and giving them a status of some kind of deputies… This is wrong.

In general, do you see opportunities to improve relations between Ukraine and Russia, at least in some perspective?

I'm sure that's exactly what will happen. I will make every effort to make it happen. This special case resulted in an extremely negative attitude of the Russian society to the Ukrainian people, as well as of a large part of the Ukrainians to the Russians and Russia as a whole. Putin and his team have led us to this. Once the Russian regime is changed and Russia’s path toward building a democratic state is restored, the relations between Russia and Ukraine will start improving with every month and in all fields, whether it’s politics or economics. I have no doubt.

That is, Russia also has to return Crimea?

The Russian leadership has to be replaced. The new Russian government should start following the Russian Constitution and respecting international law.

Why has the issue of Crimea not been negotiated at the level of the Budapest Memorandum’s guarantor states? The U.S. and the UK guaranteed Ukraine’s territorial integrity, according to this document…

This is a question that I’ve been asking, too. I was recently in the UK, asking the lawmakers the same thing. They admit that the UK dropped out of this process, although the United States does take part in defining the fate of Ukraine. I don’t exclude that the guarantor states – the United States and the United Kingdom – may initiate a discussion on the responsibility of signatory states. Great Britain and the U.S. can help Ukraine return to its borders. We have the Minsk agreements, and if the Budapest Memorandum’s signatories also make efforts, it could lead to an end to the conflict.

Amid falling oil prices, is there a possibility that the Russian authorities continue the war with Ukraine in order to distract people from internal economic problems?

Theoretically, anything is possible. Although, I don’t think they will. Russian authorities really need the sanctions to be lifted. And to have the sanctions lifted, it’s necessary not to renew the war, but to finish it. If Putin takes the other option, it would mean the closure of borders and the crackdown within Russia. I don’t believe he’s ready for this.

Does migration crisis in Europe play into Putin’s hands?

If we are talking about the internal Russian rhetoric, then, of course, it helps. All that is bad for the West helps strengthen Putin’s regime in Russia. There is a so-called effect of mobilization around the leader. The whole propaganda machine works on this concept. In this context, all that is bad for Europe is good for Russia.

Do you think that Putin would agree to withdraw from the Ukrainian Donbas in exchange for the lifting of sanctions?

I’m sure he would agree, if the states that support Ukraine, the Budapest Memorandum’s guarantor states demand implementation of the agreements together. No one will forget that Russia has treacherously violated its obligations.

Speaking of deadlines, it can happen within the next six months.

Roman Tsymbaliuk is an UNIAN correspondent in Russia