The resignation of one of the Ukrainian government's most important actors – Minister of Economic Development and Trade Aivaras Abromavicius – is a hard blow to the international image of Ukraine.

On Wednesday, February 3, Ukraine’s Economy Minister Aivaras Abromavicius stunned the public with the announcement of his resignation, stressing that the key reason for this move was a conflict with the Deputy Head of the Bloc of Petro Poroshenko parliamentary faction Ihor Kononenko. "As a representative of a political force that nominated me to the post of minister, he has done a lot recently in order to block my work and the work of my team," said the minister.

Among other things, Abromavicius claimed that Kononenko actively lobbied his protégés for the post of CEO Ukrtranshimamiak state holding, people he controls lobbied for various appointments to Derzhzovnishinform state company, powder metallurgy enterprises, and the National Accreditation Agency.

The culmination of the lawlessness in personnel issues and desire to fully subdue [the money] flows was the will to have his [Kononenko’s] "own" deputy minister in the Ministry of Economy, who would be responsible for Naftogaz and other state-owned enterprises. The applicant presented a full package of documents for his appointment and said: "I want to be your deputy. I’m in Kononenko’s team, and my candidacy has been agreed above." Then I received a call from Presidential Administration with an insistent recommendation to accept this person, and also another one - as deputy for defense issues. To which I replied: "I will not be part of this bargaining," and asked to be released from office.

"Eventually, Kononenko said he wants to hear my report at a faction meeting and consider my resignation. I decided to facilitate the task of Kononenko and his team, so I submitted a resignation letter," said Abromavicius.

The minister said that "Neither I, nor my team is are not ready to serve as a cover for renovation of the old schemes and creation of the new ones for the benefit of individual political and business players… Me and my team, we are ready to go immediately. I am asking the parliament to vote for my resignation tomorrow [on February 4]," he said. 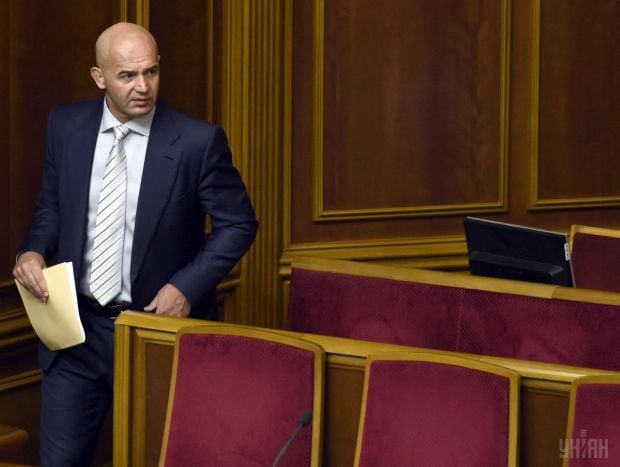 At the same time, Ihor Kononenko denied Abromavicius’ accusations calling them an attempt to shift the responsibility for the ministry’s failures. He stressed that neither verbally nor in writing did he communicate with the minister with respect to any appointments, claiming that he also did not send anybody to mediate on these issues.

However, the National Anti-Corruption Bureau of Ukraine launched a criminal investigation into the facts stated by Abromavicius, under Part 2 Art. 364 of the Criminal Code of Ukraine (abuse of authority or position in power), according to the NABU statement.

The detectives are to search for the evidence of the alleged interference in the work of the ministry by the first deputy leader of the BPP faction Ihor Kononenko and some other MPs.

“Black spot” from the West

The statement by Aivaras Abromavicius sparked an unprecedented reaction in the Ukrainian society and abroad. Like a bolt from the blue came a joint statement of the nine ambassadors in Ukraine (Canada, France, Germany, Italy, Lithuania, Sweden, Switzerland, United Kingdom and the United States): “We are deeply disappointed by the resignation of Minister for Economic Development and Trade, Aivaras Abromavicius, who has delivered real reform results for Ukraine. During the past year, Abromavicius and his professional team have made important strides – implementing tough but necessary economic reforms to help stabilize Ukraine's economy, root out endemic corruption, bring Ukraine into compliance with its IMF program obligations, and promote more openness and transparency in government.”

"It is important that Ukraine's leaders set aside their parochial differences, put the vested interests that have hindered the country's progress for decades squarely in the past, and press forward on vital reforms," the diplomats said. 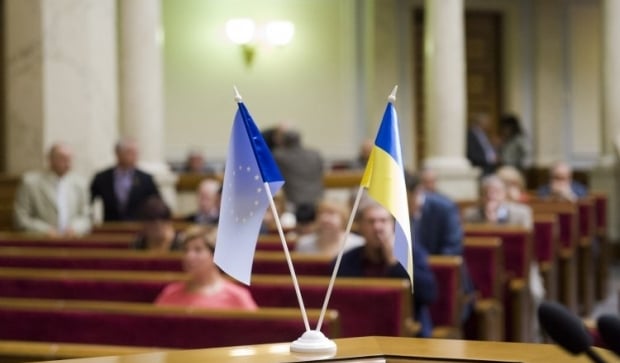 European Union Trade Commissioner Cecilia Malmström has also said that she is upset with Abromavicius’ resignation: "He did an important job to fight corruption."

The EU is “very concerned that the people who aimed to change the system, start reforms and reach the point of no return are now leaving their posts," said Jan Tombinski, head of the EU Delegation to Ukraine.

The expert at the Washington-based Brookings Institution, former U.S. Ambassador to Ukraine Steven Pifer said that the decision by Abromavicius to resign as Economy Minister is a “major blow for reform in Ukraine.” “9 ambassadors' statement makes clear West's concern,” he tweeted.

In general, Ukraine’s Western partners have called the shocking resignation a signal that is "not encouraging." At the same time, diplomats insist that the country's reforms must continue.

Roughly speaking, dozens of the ringing bells from the West that corruption has not gone anywhere despite “serious fight” against it in Ukraine turned into a one clear signal  to the Ukrainian authorities to finally stop their undercover games and get to work. Otherwise, Ukraine should not expect either political or financial support from the international community.

A battle of European and Soviet attitudes

The situation with the resignation of Abromavicius means that "we still need to accomplish a lot in the fight against corruption," according to the former Minister of Foreign Affairs of Ukraine, Volodymyr Ohryzko. He noted that "proposals have already been voiced of lifting the mandates of certain well-known individuals." "This is a real struggle of a new European style with the Soviet one, and it is ongoing. And what happened today, is another evidence of this," he said.

According to the diplomat, if the ongoing consultations at the highest level end up in Abromavicius leaving his post, this will mean that "conditions for Ukraine’s normal economic development are missing." However, according to Ohryzko, he has the feeling that "not everything is lost yet."

The system, for which Viktor Yanukovych was criticized, has successfully survived the collapse of his regime.

In turn, the director of the Institute of socio-political engineering “Dialog,” Andriy Miselyuk, notes that the today’s scandal reveals two serious problems of reformatting the government, and the main one is the pressure of the President's team on the Cabinet. "The system, for which Viktor Yanukovych was criticized, has successfully survived the collapse of his regime, and it’s alive today,” said the analyst. 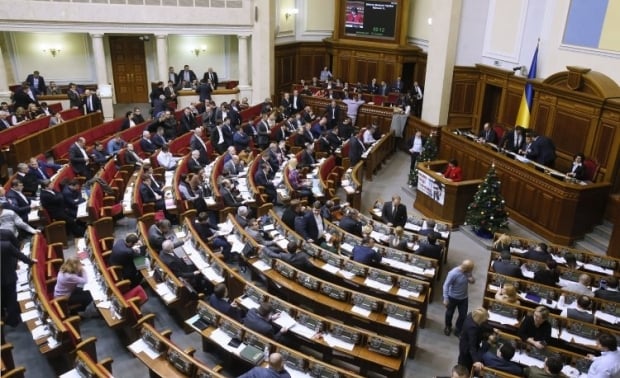 The process of reformatting Cabinet has systemic problems / Photo from UNIAN

In other words, representatives of the centers of power, one of which is a pro-presidential faction in parliament, dictate to the government managers how they should work, thus preventing them from being effective. "In fact, it was Kononenko who declared last year that the tasks of the ministers must first be approved, and only then should the nominees be selected. And now it turns out that, ignoring the fundamental principle of action of the ministers and managers of large state-owned enterprises, Kononenko is trying to appoint his protégés to such positions. Therefore it is obvious that the process of reformatting the Cabinet has systemic problems," said Miselyuk.

"The current scandal indicates that that reformatting the government will be accompanied by [other,] sufficiently serious, scandals," the expert said.

This opinion is shared by the political scientist, Director of the Institute of Global Strategies Vadym Karasyov. According to him, there is an ongoing struggle of various groups of influence in the presidential team. Conventionally, a business wing, which includes Ihor Kononenko, and technocratic wing, defending technocratic ministers (Natalie Jaresko, Oleksiy Pavlenko, and Aivaras Abromavicius), wage a real backstage war around the formation of a new government.

The political analyst reminded that, until the resignation is accepted by the Verkhovna Rada, it is not completed. "Most likely, there is a warning behind this announcement of resignation, aimed to calm down the appetite of different businesses and parties in the process of shaping the new government," he said.

This is confirmed by the fact that, despite Poroshenko’s official reaction coming only later on Wednesday evening, the president said he believes Abromavicius should remain on post and continue implementing reforms. I believe that Aivaras [Abromavicius] should remain in office and continue reform. He's left to think it over," the president said after a personal meeting with the Economy Minister.

Poroshenko stressed that the facts voiced by Abromavicius must be investigated by the newly-created and independent National Anti-Corruption Bureau (NABU). “Ihor Kononenko has got into contact with the NABU and informed he was ready to cooperate. This was confirmed by the Bureau’s top officers," the president said.

"The sooner the society will get answers to the questions, the better," Poroshenko added.

However, the whole Ukrainian political beau monde should seriously think about what is happening. While political bargaining and distribution of “lucrative” positions is discussed only within the Ukrainian society, the government is not really afraid of losing face. Once the scandal goes beyond the Ukrainian threshold, the face is lost immediately. That's what happened today. The statements of the ambassadors and diplomats are not just "concern" over the fate of an individual minister. Such statements are a signal that the State of Ukraine has zero credibility.