Why Kremlin takes step back on Syria

Russian President Vladimir Putin ordered Tuesday, March 15, to start the withdrawal of the major part of Russia’s military group from its Syrian bases. UNIAN tried to understand the reasons behind this decision and whether it will affect the situation in the east of Ukraine.

At a meeting with the Russian defense and foreign ministers, President Putin backed his decision to pull back most of the troops with the “fact” that Russian troops, in general, fulfilled their mission. However, he said, the bases in Tartus (Navy) and Hmeymim (air force) will continue  to operate as usual, so they should be protected from land, sea and air.

In addition, according to Russian media, Russian military advisers and arms specialists, who assist Bashar al-Assad’s forces, will continue their work in Syria. In addition to military advisers, some staff servicemen, support structures and a number of other specialists will also stay. All in all, nearly a thousand of Russian soldiers will continue their overseas mission.

Putin’s spokesman Dmitry Peskov a little later emphasized that the move on the withdrawal of Russian troops from Syria must not be considered a result of any negotiations, as it was taken personally by the President of the Russian Federation: "This is the decision of Russian president and commander-in-chief based on data on the results of Russian contingent’s mission in Syria. It was not a subject of negotiations (with foreign colleagues), it was the decision of the Russian president."

Director of the analytical group Da Vinci Anatolii Baronin notes that an important factor for the decision on the withdrawal of Russian troops from Syria is that the tasks set before the Russian military group in Syria have in fact been met. That is, president Assad continues to be in power despite the fact that U.S. and its allies insisted on toppling his regime and supporting the Syrian opposition.

The expert says another factor was the fact that Russia’s further participation and the air strikes are not able to resolve the issue of ISIL. Therefore, as of today, it is better for Russia to go for a partial drawback from Syria, as continuing the strikes against ISIL will yield no results.

Baronin believes that, in order to fight ISIL effectively, Moscow would need to deploy land forces, and this would mean a significant shift of the regional power balance and increase Russia’s military losses. Moreover, each day of the "mission" cost Russia nearly $2.5 million. Amid the ongoing crisis, this is just too much for the Russian budget, so Russia chooses the visible folding of the mission. "However, we understand that the groups stationed at a Hmeymim air base and at the naval base in Tartus will continue operation, and to do this, they need the supplies, logistics,  security, and support units. Accordingly, we understand that the folding is only partial. The main forces and Russian resources in Syria will be retained, and it will be a guarantee for the regime of Bashar al-Assad so that the Syrian opposition and the forces affiliated with ISIL don’t launch and offensive on Assad-controlled territory near Latakia," he says. 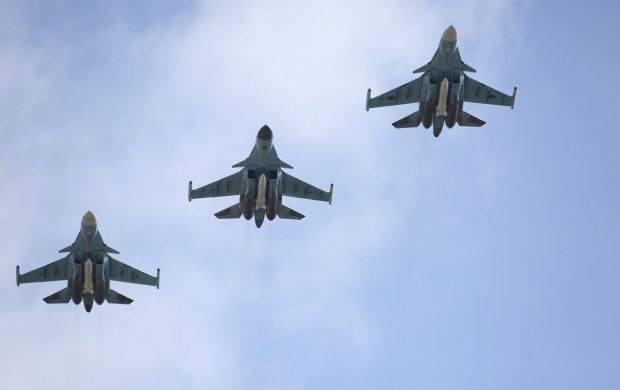 As for the future situation in Donbas, Baronin believes that the partial withdrawal of Russian troops from Syria has no direct impact on the situation in the east of Ukraine. "The forces and resources involved in the Russian operations in Syria are not identical to those used by Russia in Donbas. Escalation of hostilities in the zone of the Anti-Terrorist Operation depends solely on political will of the Kremlin," he said.

According to Director of the Center for Army, Conversion and Disarmament Research Valentyn Badrak, Russia’s priority in Donbas today is freezing the conflict. "I don’t think that today, Putin has an opportunity to start an escalation of the war in Donbas. On the other hand, the situation in Syria indicates several trends. Firstly, Russia is in fact showing it’s exhausted with war. Secondly, Russia needs maneuvers, and it [the withdrawal of troops from Syria] is one of such maneuvers, aiming at taking attention away from Russia’s true intentions," he said.

In this case, it is more about a halt to an active phase of the war – the bombings – than about the withdrawal of troops, because the military bases remain, according to the expert. At the same time, in his view, there still is a sufficient number of Russian troops in Syria to re-engage, if necessary.

The key question for Ukraine, according to Badrak, is linked to whether Russia’s possible pullback from Syria is somehow connected to certain agreements between Russia and the West. "It is disturbing that in the background of Russia ‘ending the war in Syria,’ we see a harsher stance of some Western powers with regard to Ukraine and their greater loyalty to Russia. In particular, in this case I'm talking about Germany. I am talking about Germany and France forcing Ukraine to hold elections in the occupied areas of Donbass," says the expert.

It may be added that Russia's withdrawal from Syria is the desire, or the same as the interests of the USA, and also coincides with Turkey's interests. Thus, Putin is trying to avoid extreme risks, such as collisions with Turkey and Arab players in the region.

Badrak believes that the situation in Syria should make Ukraine pay more attention to the preparation for a possible war with Russia. The better Ukraine prepares for war with Russia, including a full-scale, non-contact war, the less chances there will be that Russia would unleash such a war. "I agree with the conclusion that with the withdrawal of a certain number of troops from Syria, the risk for Ukraine increases. I don’t think it can surface in the coming days, or next month because, it is now more advantageous for Putin to bring the Ukrainian issue into a political framework and to try to solve the problem through the artificial election and artificial promotion of officials loyal to him to the positions in a local government of the occupied areas," says Badrak.

Political analyst on international affairs and a former director of the Information Department at the Ministry of Foreign Affairs of Ukraine Oleh Voloshin said that Russia wants to crystallize to the maximum their tactical successes achieved in Syria, and to reduce their military presence just in time, staking a victorious image. That’s because the Russian military intervention, contrary to most forecasts, has allowed Putin to reach his basic goals. Firstly, he became a key mediator in the peace process in Syria (Russia has been recognized by all and, above all, by the United States, as an important player in this regional conflict, and a direct dialogue with Washington has been established on this subject, which does not allow to assume any Russian isolation in relation to the events in Ukraine).

Secondly, it strengthened the Assad regime, nut not enough to allow Assad to win this war (which, basically, is not what Moscow needs). In the first place, it was important for the Kremlin not to let him lose. The Kremlin also realizes that the subsequent aid to Assad with the Russian planes, soldiers, and money to achieve total victory would be absolutely absurd. Therefore, the withdrawal from Syria is a signal to Damascus that the compromise is needed. 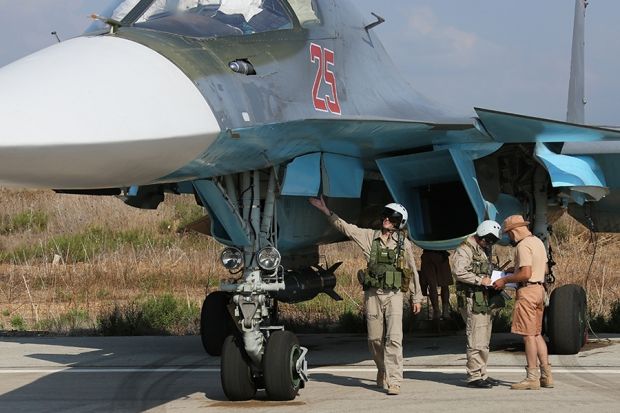 The Kremlin understands that the subsequent aid to Assad with the Russian planes, soldiers and money to achieve total victory is absolutely absurd / stat.mil.ru

In addition, the pullback of the Russian troops is a signal to Iran, which is the only country interested in Assad’s overall victory. Russia hints it will not fight for the interests of Iran in Syria, as Tehran is not contributing to raising the oil prices and, moreover, approved the increase of oil production in the country by 500,000 barrels per day.

According to Voloshin, another factor advocating withdrawal of the Russian troops is the proposal to the United States to start creating a single common coalition to fight ISIL. That’s because Russia has until recently waged war in Syria unilaterally, and in most cases, not against ISIL, but against the Syrian opposition – the fact condemned by the West. And this Russian intervention led only to a deepening migration crisis and more victims. Now, if the main part of the Russian troops withdraw from Syria, Russia might be able to join the coalition with the United States and Arab countries, who are fighting ISIL.

According to the expert, there is a situation in Syria now, when the conflicting parties actually coerced to peace. That is, the opposition is sufficiently weakened, while Assad has not gained enough prowess to win. "If we proceed from the fact that Syria has a moderate opposition, and it can influence something, it is forced to negotiate with Assad. On the other hand, Moscow also sends a signal to Assad, who used to say that he would fight to the bitter end, showing that Russian troops won’t fight for him, so he needs to negotiate," said Oleh Voloshin.

One of the possible scenarios is Syria becoming a federation.

"The main question is whether the international community finds the wisdom and the will to join forces and defeat ISIL together. Since without destroying ISIL in a ground operation, the war in Syria will not end soon. Unfortunately, one can hardly imagine coordinated actions of the Syrian government army and the moderate opposition in some ground operation supported by U.S., Russian or Arabic air forces," said the expert.

"Russia has made a breakthrough on the issue of international isolation by effectively using in Syria a military group formed of various types of forces," said former deputy chief of the General Staff of the Armed Forces of Ukraine, Lieutenant-General Ihor Romanenko.

He added that in this regard, it should be considered that Russia has indeed reached its main tasks in Syria.

However, according to the expert, because of its actions in Ukraine, Russia has got into a difficult situation, and continues to look for ways out of it, trying to save face. "Russia is not capable of waging two wars [in Ukraine and Syria] for a long time, even being a sufficiently powerful state military-wise. There is this high cost, so it was necessary for Russia to stop just in time and reduce this cost," says Romanenko.

"Putin wants to focus on Ukraine in terms of progress on the political part of the Minsk-2 agreement, in particular, regarding the elections in the occupied Donbas, on which Germany and France insist. Russia wants to solve this issue in its own interests. Putin will focus all of his resources of a wider range on this issue, including military," said the general.

According to him, after the withdrawal from Syria, the probability of escalation in Donbas rises: "But it does not mean that the troops earlier involved in Syria will be deployed in Ukraine… It just means that all military resources can be focused specifically on Ukraine."