Ukraine and the world community celebrated the 30th anniversary of the Chornobyl nuclear disaster. The Russian occupation authorities in Crimea banned the activities of the Mejlis of the Crimean Tatar people. The leading Western powers are seeking to fine-tune their attitude toward the Donbas conflict, and Russian Foreign Minister Sergei Lavrov is trying to save a good face. 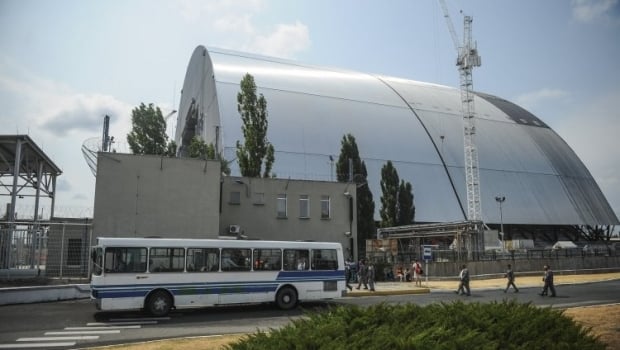 Construction of the new sarcophagus at Chornobyl NPP / Photo from UNIAN

The Chornobyl disaster of 1986 has seriously changed the life of the Soviet Ukraine and the whole USSR. In fact, all of humanity was taught a lesson in the consequences of negligence in the peaceful use of nuclear energy, and the effects of the disaster will be haunting the world for an indefinite period of time. Although 30 years have passed since the tragedy near Kyiv, Ukraine still needs international assistance. The construction of a new confinement over power unit 4 of Chornobyl nuclear power plant has reached a final stage. And the fact that no one rushed to complete it by the sad anniversary has its own logic. So does a statement of Ukrainian President Petro Poroshenko who reminded that the Russian aggression had gotten Ukraine facing yet another threat of a nuclear disaster and virtually eliminated the prospects for nuclear disarmament, as the Budapest Memorandum turned out to be a useless scrap of paper.

Russia behaves as a bully, and not only in Crimea. Moscow also went on a “safari” against Nadia Savchenko’s sister Vira.

Russia is not going to listen to the arguments of reason and give up on its deliberately bullying behavior in foreign policy, rattling sabers with every opportunity. Despite the increased attention to the situation in the Crimea of the PACE and the Council of Europe Committee of Ministers, the invaders have completed the circle of Crimean Tatar persecution by banning the Mejlis of the Crimean Tatar people on the territory of Russia with a decision of the so-called “Supreme Court” of Crimea. The decision seems logical for Russia, since it is the Crimean Tatars who represent the most organized force capable of resisting the invaders.

However, Russia behaves as a bully not only in Crimea. Moscow also went on a “safari” against Nadia Savchenko’s sister Vira. It was only due to the Ukrainian consuls that Vira Savchenko was rescued from being thrown in jail on suddenly (or not!) revived charges of insulting the judge in the territory of the Chechen Republic. And how about the initiative of Boris Gryzlov, Russia’s representative to the tripartite liaison group on Donbas settlement, to offer Ukraine to wrap up the Anti-Terrorist Operation and stop the economic blockade of the militant-occupied areas of Donetsk and Luhansk region? Meanwhile, the situation at the Minsk talks is such that a preliminary agreement on a ceasefire during the Orthodox Easter holidays is seen as a great achievement. It is rather interesting, by the way, how the Ukrainian side will use the exit of its representative to the contact group on political issues Roman Bezsmertny from the negotiation process.

The leading Western powers have made two interconnected diplomatic moves this week. Leaders of Germany, U.S., UK, France, and Italy have met in Hanover with the Ukrainian issue one of the top on the agenda of talks. The "Hanover Five" does not recognize annexation of Crimea and calls on Russia to fulfill its part of obligations under the Minsk agreements to restore bilateral relations. For obvious reasons, Moscow chose to play deaf. After that, there was a visit to Kyiv of U.S. Assistant Secretary Victoria Nuland, which left a bright conspiracy trail. Only direct participants of the dialogue can be definite about the tone of her statements, but there is reason to doubt that the Obama administration has decided to go on a diplomatic spurt in the Ukrainian direction. At least, deputy speaker of the State Department Mark Toner said that Russia and the militants it supports are failing to comply with the terms of the Minsk deal, in contrast to Ukraine.

It is becoming increasingly clear that Russia is not going to create public grounds for the West to soften its stance. Sergei Lavrov was a pioneer in this regard, calling on the EU and the United States to increase pressure on Ukraine for it to implement the Minsk agreement, then warning the West that Russia will become fully self-sufficient if the tone of dialogue with the Kremlin does not alter. Such statements have long become the source of political motivations only within Russia, as they are hardly perceived by Western countries seriously.