Foreign ministers of France and Germany visited Kyiv and Donbas. Ukraine is boosting its efforts in a campaign for non-recognition of the outcome of the elections to the State Duma of the Russian Federation based on the organization of voting in the occupied Crimea. The EU is in a state of crisis, according to its political leaders. 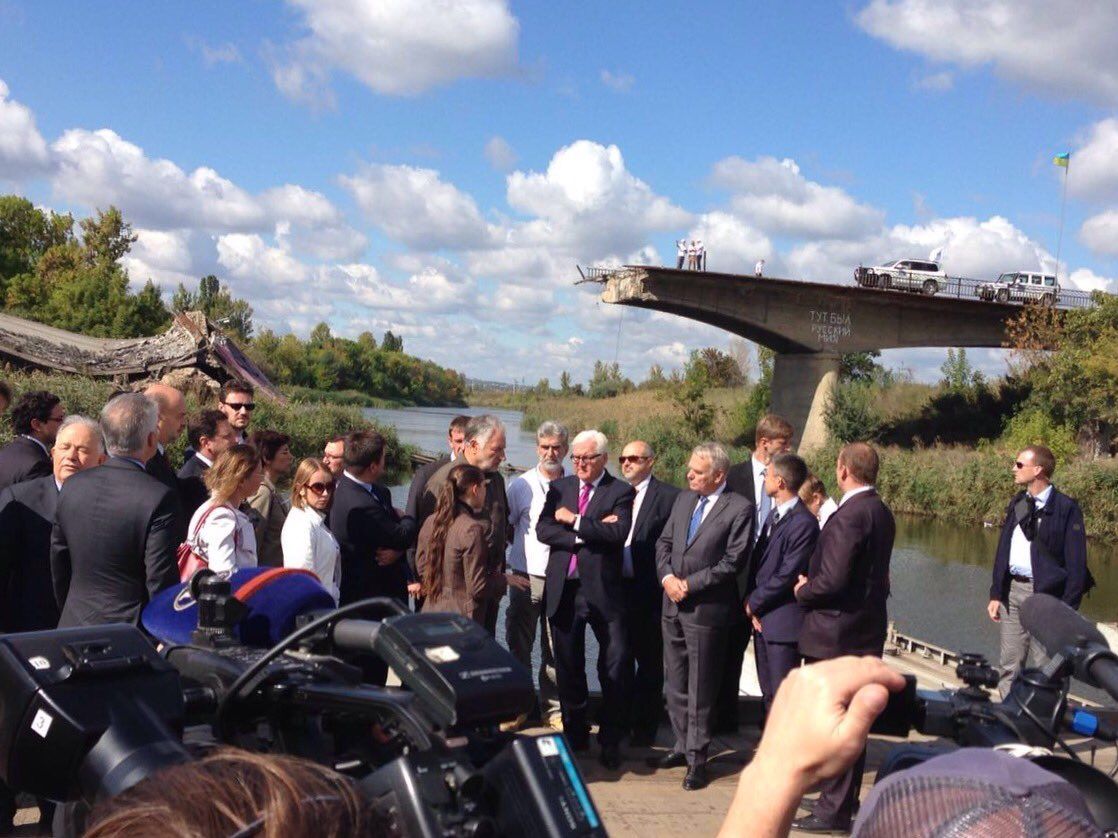 On September 15, Foreign Minister of Ukraine Pavlo Klimkin took his French and German counterparts to a militant-destroyed town of Sloviansk / Twitter GermanForeignOffice

Summer lull gave way to increased diplomatic activity. French and German foreign ministers have both visited Ukraine in an attempt to put pressure on the official Kyiv, taking advantage of a relative de-escalation in Donbas. This time, the "bad cop" was Jean-Marc Ayrault, who apparently suggested that this relative silence in eastern Ukraine was enough for the Verkhovna Rada to accelerate the adoption of laws on the special status of Donbas, amnesty to militants, and other legislation that would enable Berlin and Paris to announce that the Donbas conflict was over. The French top diplomat’s hopes seemed to have vanished even before his trip to Kramatorsk and Sloviansk, during his meeting with the Ukrainian MPs. Frank-Walter Steinmeier, though more restrained in his aspirations, was still less fortunate than his French counterpart: his statement claiming that the diplomats arrived in Ukraine with the Russian pledge of a week-long ceasefire in the conflict zone have been refuted by Putin's press secretary Dmitry Peskov, who said no such promises had been given as Russia was “not part to the conflict”. Once more, Russia is “washing its hands” of taking direct part in the Donbas settlement.

It’s not only what German and French foreign ministers offered in Kyiv that is interesting but also the format and the very fact of their Donbas visit. It seemed that neither Steinmeier not Ayrault were too eager to see with their own eyes the territories liberated from separatists in 2014, but the experience gained will surely be useful for them. However, it would be naïve to believe that Germany or France would change their rhetoric: the Donbas conflict is a pan-European, for resolving which the Western powers put pressure on the weaker party, Ukraine. It is also curious to note that British Foreign Secretary Boris Johnson, who also paid a visit to Kyiv this week, said that even after Brexit, London continues to support Ukraine.

Meanwhile, Kyiv has added some rigidity to its official position. It is not about the IMF loan tranche that arrived this week but the need to articulate national interests more clearly. Petro Poroshenko and Pavlo Klimkin in their public speeches have both made it clear that Ukraine does not intend to listen to the wishes of its Western partners, who essentially broadcast the Russian scenario of resolving the Donbas conflict. Poroshenko has stressed that Russia is waging a hybrid war against the entire Western world, and Ukraine is actually on the front line in this confrontation. Comparing Russia with a rhinoceros, the President aptly described the Kremlin’s tactics, manifested, in particular, in holding the State Duma elections in the occupied Crimea.

The president made it clear that he intends not to forget about the Crimea issue, adding that new sectoral sanctions against Russia are needed, to force it to listen to the international community. The Kremlin’s logic is obvious: there will be attempts to integrate the newly elected MPs into international organizations, including PACE. Moreover, the fact of this election having been held in the occupied peninsula will emphasize a well-known Russian ideology: "Crimea is ours." Ukraine demands from the international community not to recognize the general outcome of the State Duma elections but the West is likely to limit itself to certain targeted solutions, despite Russia’s unprecedented audacity.

Both European Commission President Jean-Claude Juncker and German Chancellor Angela Merkel have recognized, albeit in different words, that the EU is now in crisis. However, that is no reason for refusing to grant Ukrainians a visa-free travel across the European Union. Bratislava summit of the European Union is likely to manifest the existing contradictions, without giving any answers on how to overcome the crisis. This means that Ukraine needs to look for ways to intensify relations with its neighbors. In this regard, quite revealing is the visit of Polish Foreign Minister Witold Waszczykowski, who agreed with Pavlo Klimkin on a more active participation of the historians of both countries in the study of the Volyn tragedy. Warsaw today is interested in Ukraine no less than Kyiv is in ensuring Poland’s backing at the European level. And this understanding must be secured with real action.