The latest public row between Volodymyr Groysman and Yulia Tymoshenko predict an exciting political spring. The blockade of coal supplies in Donbas somehow took a stretch toward the corner of Instytutska and Bankova streets near the presidential administration headquarters downtown Kyiv. Prosecutor General Yuriy Lutsenko has showered his subordinates with criticism and vowed problems to people’s servants.

Yulia Tymoshenko’s recent attempt to play a game of "bad prime minister and acceptable government" has seen a rough response by Prime Minister Volodymyr Groysman. The head of government labeled the leader of Batkivshchyna faction, once also a prime minister of Ukraine, "a mother of Ukrainian populism and corruption," blasting one of the country’s most popular politicians at the moment.

Also, the prime minister reported on the Cabinet’s performance in 2016, while the State Statistics Agency spoke of a record (for the past four years) economic growth of 4.7% in the last quarter of last year. Since no one can adequately assess the effects of raising the minimum wage to the level UAH 3,200, the government relies on encouraging stats.

In such a situation, Yulia Tymoshenko is left with no other choice but to claim that new political forces will join the new parliamentary convocation and form a constitutional majority, allowing the premiere not to look back at a presidential veto. The political past of Ms Tymoshenko does not let her doubt that she will be the one to chair the new government after Groysman. Otherwise, there is no other explanation to her promises to "deal within a month" with low salaries, pensions, and high tariffs - the whole complex of social and economic concerns of most citizens. However, she prefers to shift onto the "people" the decision on early parliamentary elections, as long as her 20-strong faction has no other options.

The blockade of railway tracks in Donbas has caused negative reactions not only of the prime minister (who introduced the state of emergency in the energy sector) and the president (who moved with the corresponding decision of the NSDC), but also the western diplomatic missions. Of course, the motivation of each of the parties to the blockade is different, but the emergence of the rally participants in Kyiv center over the weekend is unlikely to add any credibility to their efforts. No matter how hard Semen Semenchenko and Yehor Sobolev tried to claim that "Poroshenko is worse than Yanukovych," they failed to rock the situation toward a new Maidan. Interestingly, for the third consecutive year, the anniversary of the death of the Heavenly Hundred heroes is marked with rallies with jingoistic slogans, which every time prove to be the abnormal political activity, to put it mildly. 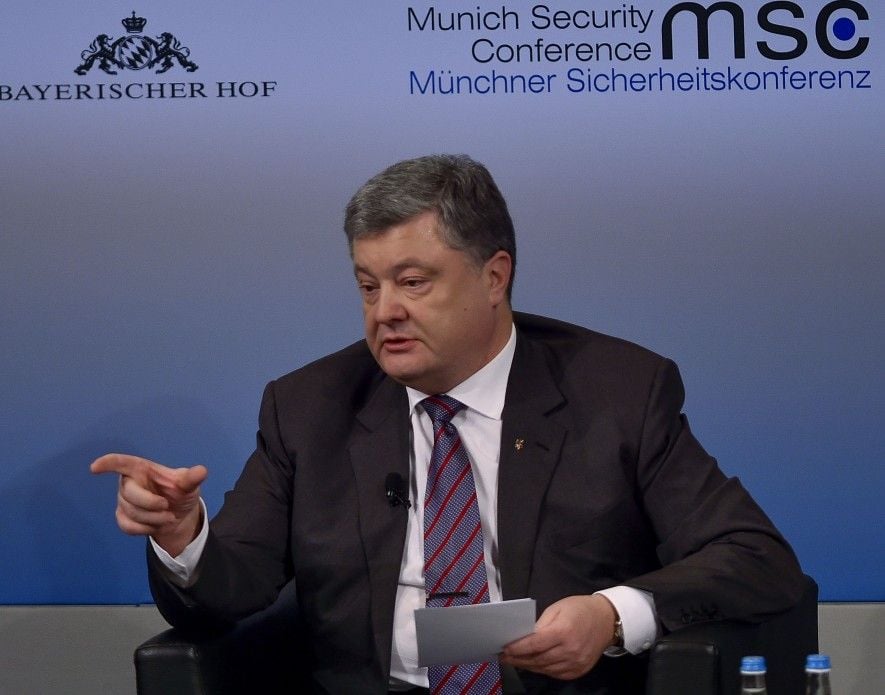 Speaking at the Munich Security Conference, Petro Poroshenko said that he stood against deciding on the Ukrainian issue without Ukraine’s participation, drawing parallels with the Munich Conference in 1938. However, the tone of statements by western leaders during the Conference does not allow suggesting that the West is giving up on Ukraine.

Vladimir Putin's decree on the recognition of travel documents issued by self-proclaimed “republics” in eastern Ukraine, which was promulgated exactly during the Conference, suggests that the Kremlin goes for another rate hike in their indirect dialogue with Donald Trump, this time - using the experience of managing rogue unrecognized republics.

Meanwhile, Prosecutor General Yuriy Lutsenko tried to compensate for the lack of any breakthrough in the investigation into the death of the Heavenly Hundred heroes, speaking on live TV at the Prosecutor General’s Office Collegium. Using his media experience, the top prosecutor scolded his subordinates for the pressure on the businesses, promised to set up drug tests for his colleagues, and reported on his return to the State Treasury of UAH 10 billion. The vow to submit to Parliament an appeal on depriving the three MPs of their parliamentary immunity is more like a warning shot: the current Rada convocation is extremely reluctant to share the law enforcers’ enthusiasm to prosecute their own kind.