Postgraduate student at Moscow State University Zakhar Sarapulov: "Hundreds of thousands of people at the rally dedicated to Crimea's accession had to see the Ukrainian flag"

This story is a reflection of Russian reality. An eight-minute interview with Zakhar Sarapulov, a post-graduate student at the History Faculty of Moscow State University, who flew a Ukrainian flag on the third anniversary of Crimea annexation, shows the real state of affairs in Russia.

The world-famous main building of Moscow State University (MGU) with a neat night illumination turns out to be full of cockroaches, bugs, and rats.

Russia allegedly does not fight with Ukraine, but at the same time a Russian citizen is demanded to name “those who ordered a provocation” and gets beat up at a police station for public demonstration of the state flag of the neighboring state. And if no one ordered it, then the man is labeled a Ukrainian extremist or a radical Islamist. Everything is clear, just like they show on TV, where exactly these two categories of people are called enemies.

The Russian Federation claims to be a law-governed state, but after the beating, the detainee is offered two options: either to "cooperate" with the authorities or to go to prison. Such an inadequate response to the flag of Ukraine on the anniversary of Crimea annexation indicates only one thing: Crimea is not yours, dear Russians. If this were the case, such cases would simply be ignored. And, it turns out, everything is done to crush any act that calls into question the Russian axiom of "Crimea is ours" ...

This story was born on March 18, when the first year postgraduate student at Moscow State University Zakhar Sarapulov flew the Ukrainian flag from the window of the university’s main building. On this day, the third anniversary of the seizure of the Ukrainian Crimea was celebrated on the square in front of this building. 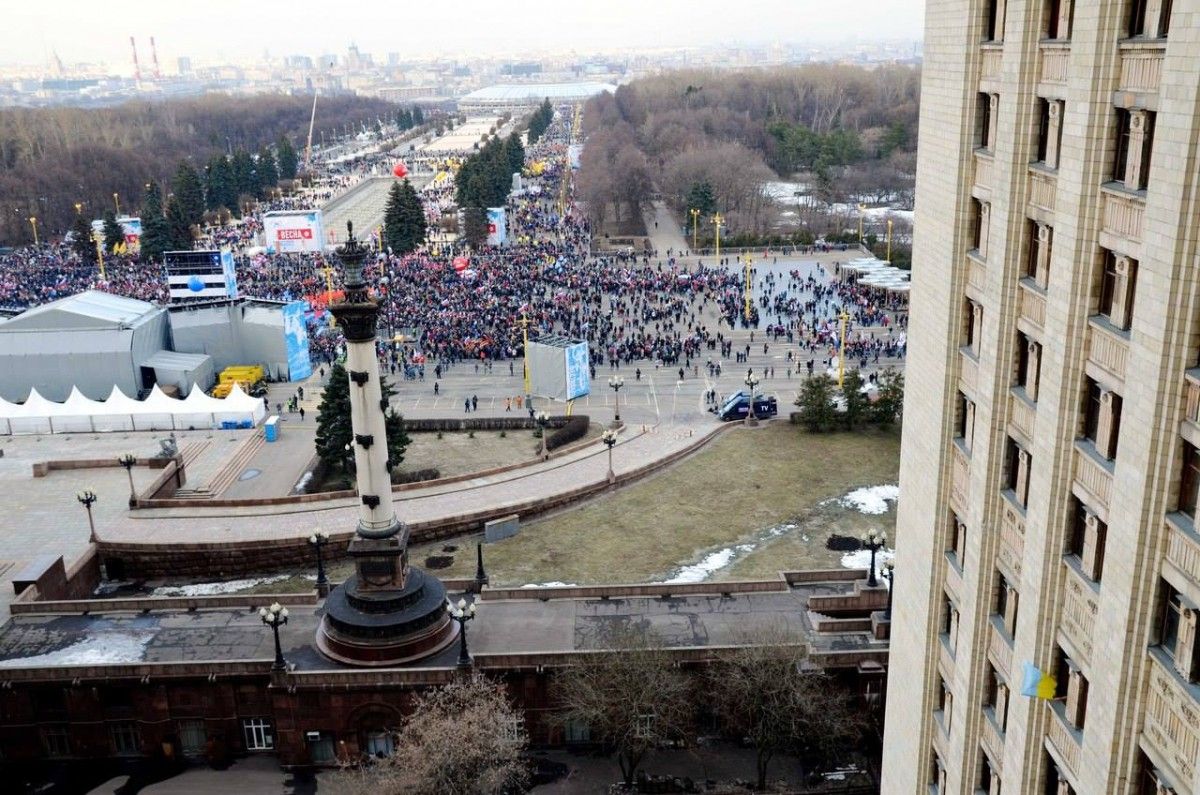 Zahar emphasizes that his action was of a non-political nature, and was intended to draw attention to the everyday problems of students. During the interview, he avoids the word "annexation," using the term "accession" instead.

Zakhar is a wonderful and very literate newsmaker. His speech is well-crafted. He knows Spanish, Portuguese, Italian and "a little bit" of English. In the university, he studies the XX century history of Cuba. If it were not for the consequences of his act, there would be no doubt after our conversation that he will become Russia’s future elite.

His interview with UNIAN ended up with him being taken to a police station at Moscow State University, along with the journalist and a cameraman. It is interesting to note that the questioning of Zakhar and the information agency’s crew was held at the same office where just three days prior he was beaten with a flagpole from a flag he had flown out of the window. By the way, the flagpole was still there, in the corner, although, this time, it was not used for intimidation. 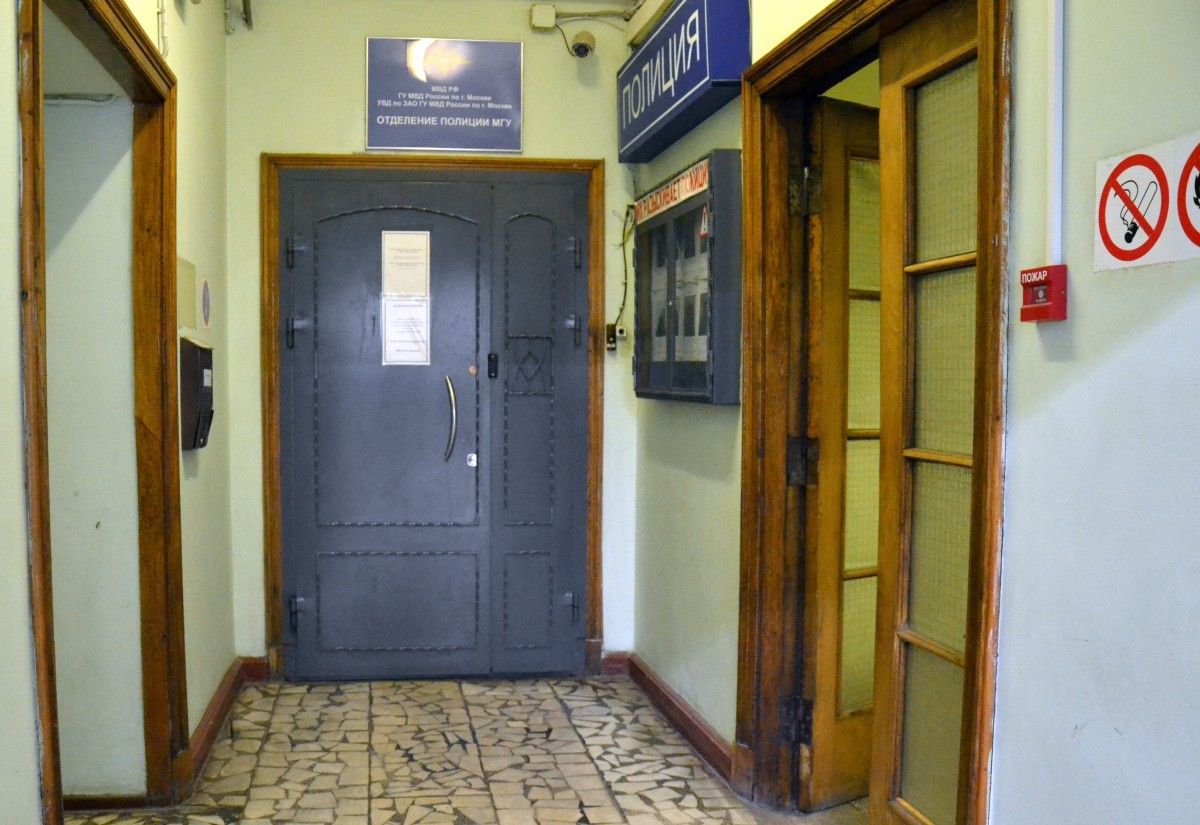 Zakhar, March 18, when it seemed all students were celebrating outside the main building of Moscow State University the day of "reunification" or, to put it right, the annexation of Crimea, you flew a Ukrainian flag out of the window. Why?

I took this step because I wanted to draw public attention to the problems that exist, in particular, in the dorms of Moscow State University. Behind my back there is the building of the Moscow State University and its side wings – these are the dorms for students and postgraduates. Living conditions are very poor: the dorms are full of bugs, cockroaches, and rats, almost in every room. By this step, I wanted to draw attention to the fact that they need to spend money not on some concerts or rallies but on the improvement of our universities. 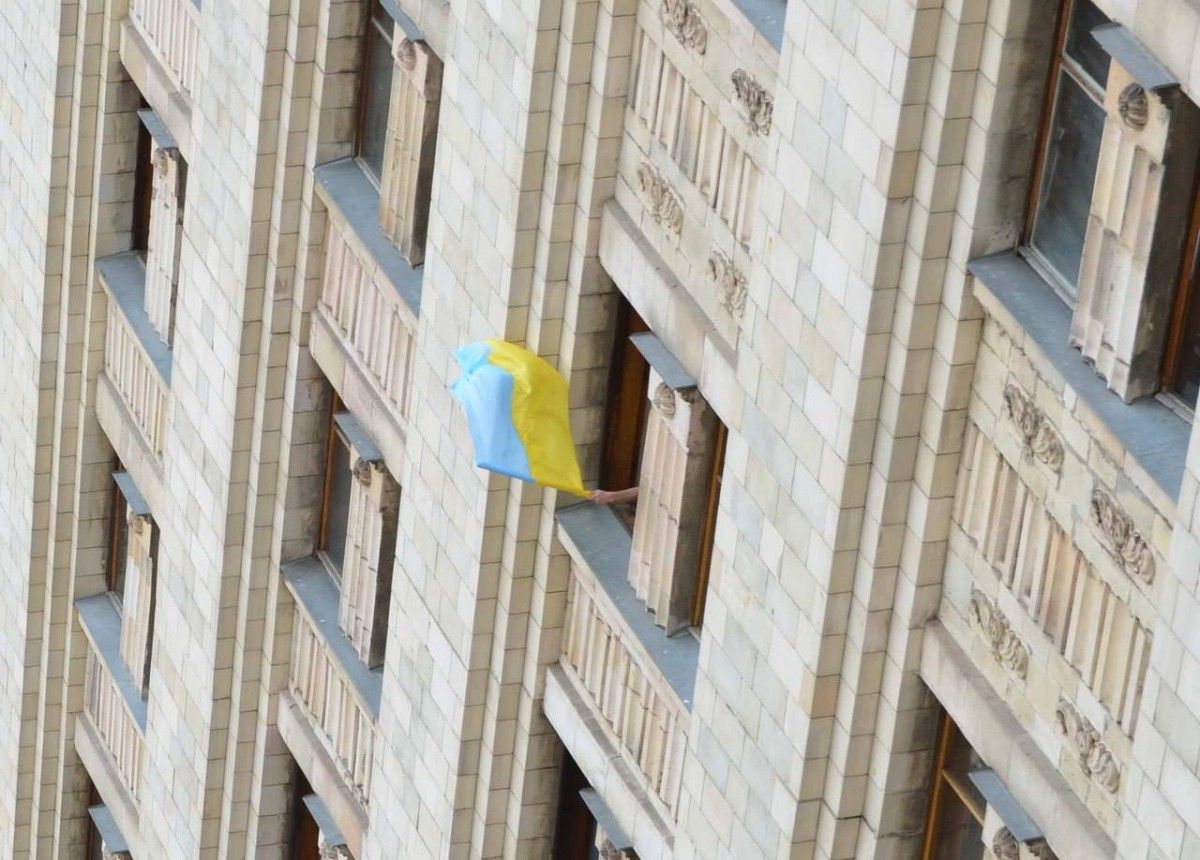 With his act, Sarapulov wanted to draw attention to the problems in the dormitories of Moscow State University / Photo provided by Sarapulov

What were the consequences for you after such an act? It is clear that the flag of Ukraine is today in Russia like a "red rag for a bull"…

I was detained by plain-clothes men who did not introduce themselves. They pressed me first near the window where I was standing with the flag. Then they took me to my room and conducted an illegal search without a warrant, seized my laptop, camera, and phone. They forced me to enter the password, opened the laptop and looked through all my files and personal correspondence. After that, already at the police station, there was an interrogation, involving punches on the head, on the groin, on the body. They beat me with their feet and hands. They tried to find out, who paid me for the act, and what organization was I part of. It was my personal act, not paid by anyone. Moreover, I did not even inform anyone of my intentions. I had nothing to say to them [the police], but to any of my replies that "I did it myself," they responded with new blows. 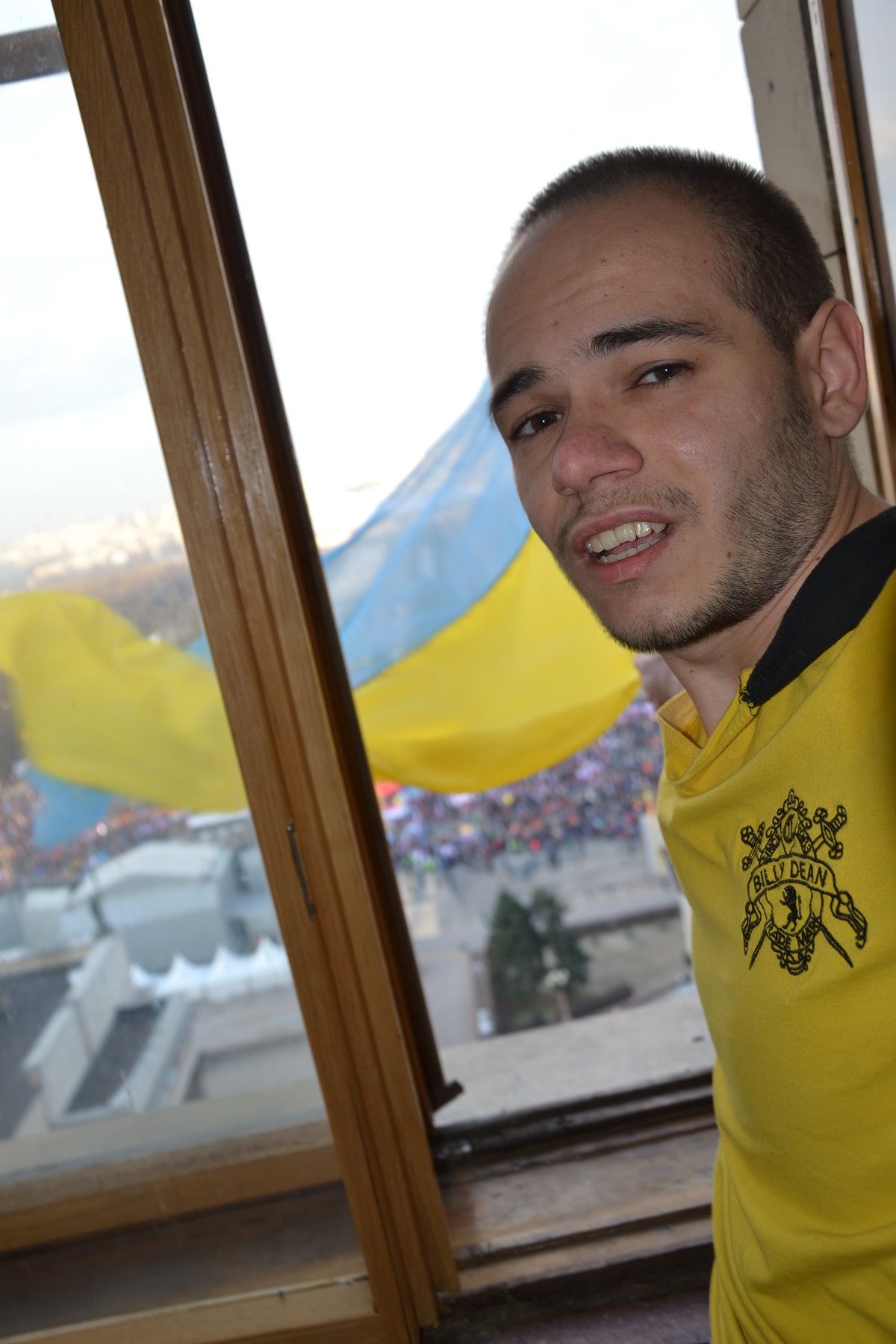 How did the interrogation end?

At the end of the interrogation, we came to the conclusion that there are two options. Option one: I sign a “cooperation paper” and will have to join the organizations they tell me to join. The people, who did not introduce themselves – but judging by their conversations, they were FSB officers or those from the Center for Combating Extremism, the so-called "Center E" -- they offered me to sign a paper where I pledge, frankly speaking, to be snitch, and then I'm released with a RUB 500 fine. The second option: if I refuse cooperation, they charge me with extremism and I get seriously locked up for a long period of time. They told me not only I will have problems but my family as well.

There are various ways to draw attention to your living conditions in dorms. Why exactly have you chosen the anniversary of Crimea annexation for your performance with the Ukrainian flag?

Looking at this flag, you can clearly see that it is hand-made, literally, sewn from random cloth. I decided that the flag of Ukraine was exactly what would draw maximum public attention at such an event. Hundreds of thousands of people at the rally dedicated to Crimea's accession had to see the Ukrainian flag. I believe that the Ukrainian flag is no extremist material, it is neither a Nazi swastika, nor an ISIS flag. If I flew a Russian flag, no one would notice anything. The problem is not that I waved the Ukrainian flag. Ukraine is an independent state, a member of the United Nations. Moreover, this is the state, which has diplomatic relations with Russia, therefore the flag of Ukraine cannot be an extremist material, the display of which is an offense or extremism.

At the moment, I try to attract as much media attention to this incident as possible so that it does not turn out that I am dragged somewhere and left there for good, and no one will ever know about it. It seems to me that in this situation it's better to be in the spotlight, because people like those who beat me up, they are afraid of light. It's easier for them to act in the dark. 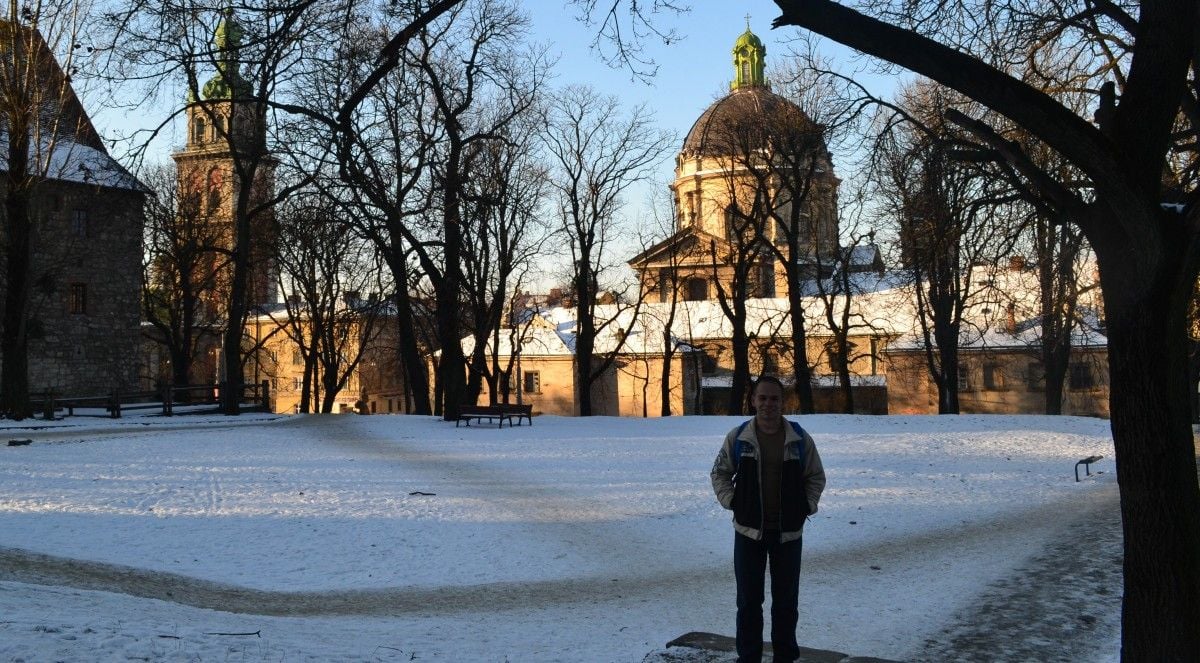 You were offered a deal: a RUB 500 fine and cooperation. What was your say?

First I would like to point out what the basis was for their statement claiming  I am an extremist. The fact is that they saw pictures on my computer – my two sisters live in Zhytomyr (Ukraine), and I visited them several times, including our trips to Odesa, Kyiv, Lviv, on various excursions. When they saw pictures of Ukrainian cities, they concluded that it was there where I was "recruited." This year’s winter, I traveled to Uzbekistan with my girlfriend, visiting historical centers: Samarkand, Bukhara and Khiva. They said: "You wear a beard, you traveled to Uzbekistan, you must be a mujahid, we will spin the Islamism line, you will be locked up as a radical Islamist." 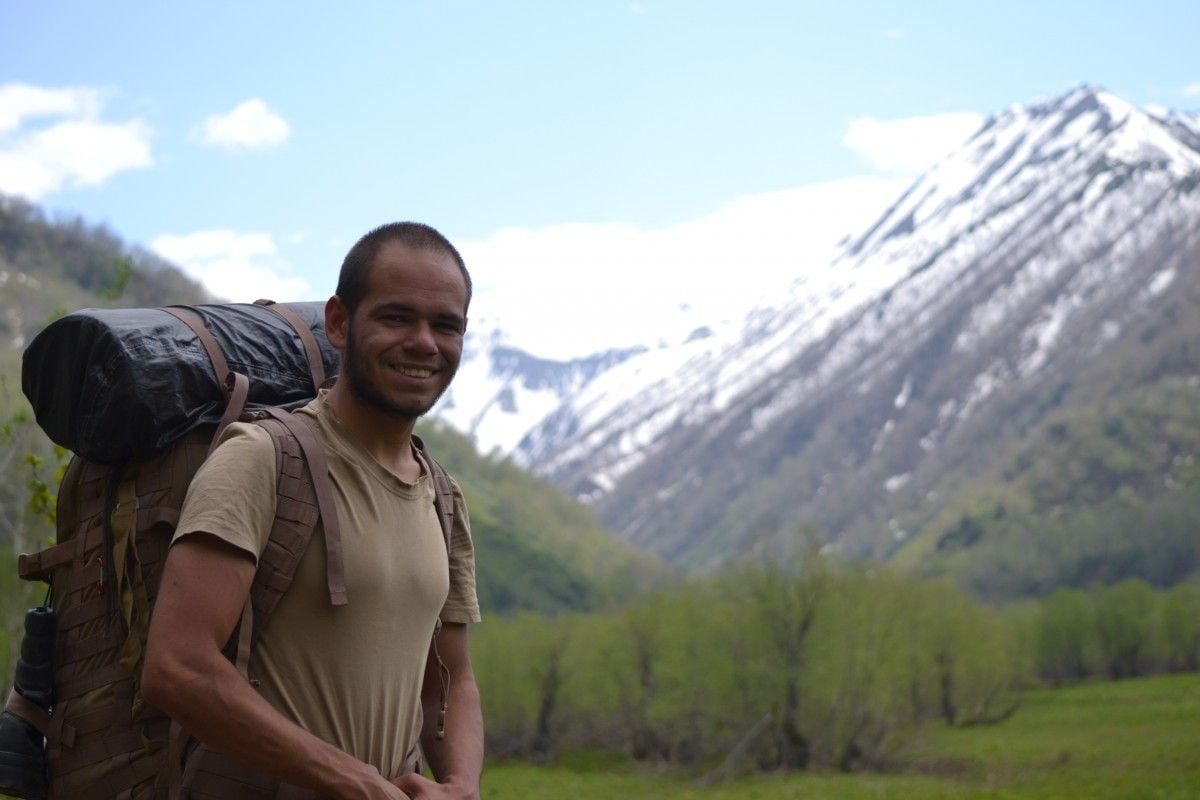 Most likely, it is. It's like an intimidation tool.

Well, you’ve definitely drawn attention to the problems with the dorms. Russian liberal media wrote about this, and that's it. Was it worth it? You’ve got beaten, and it’s not clear what will happen next with your education. Do you regret what you have done, and what will you do next?

I believe that in any situation, it is necessary to express your opinion. I believe that I did not express anything extremist. I stand for friendship between Ukraine and Russia; my relatives live in Ukraine. I love this nation, just as I love the Russian people. In this situation, expulsion from the university is the least of the ills that can happen to me. I can simply disappear, and no one will know where I am, that's why I want to attract the attention of the media to this issue, so that I don’t become a person no one knows, who has suddenly vanished. 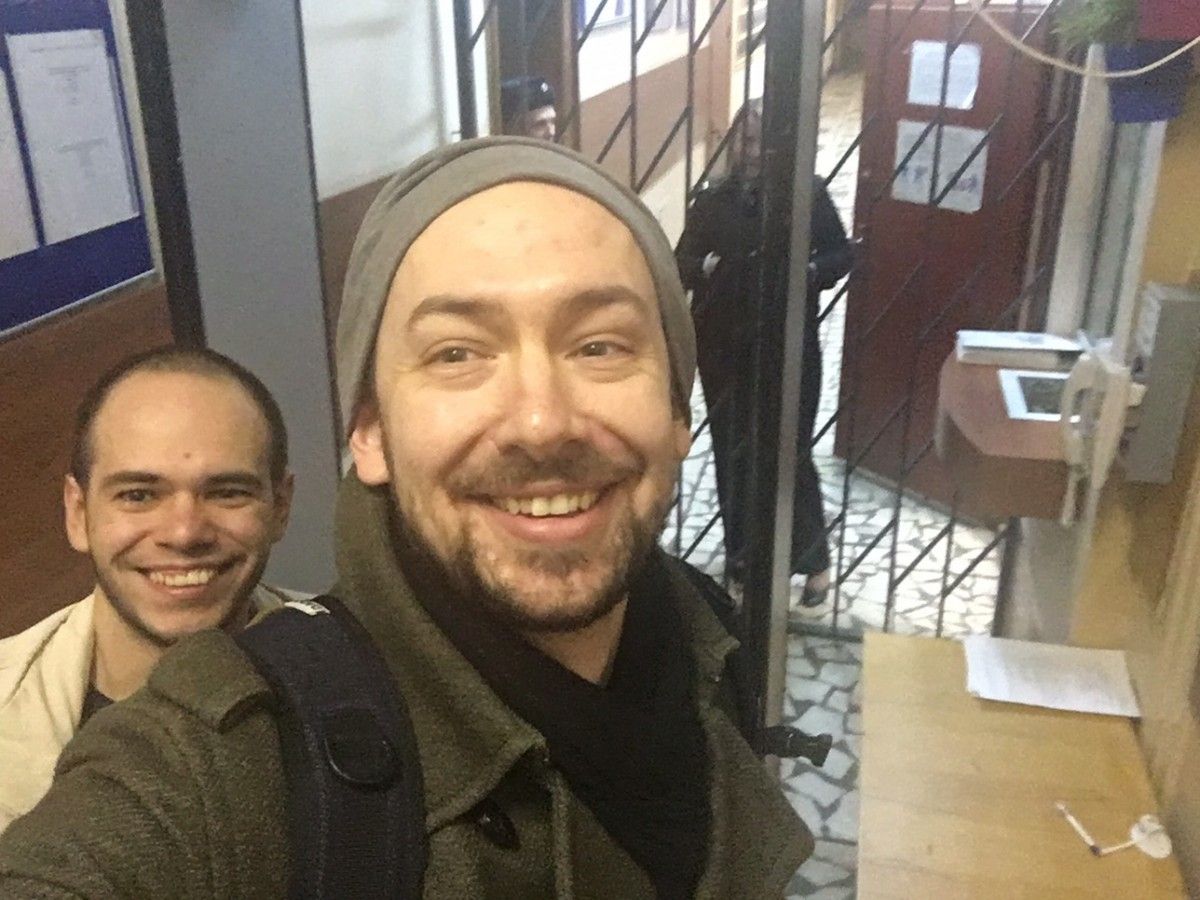 Sarapulov: I am for friendship between Ukraine and Russia / Photo from UNIAN

You said that you applied to human rights organizations following the beating. Tell us more.

First of all, I applied to the Moscow-based Committee for the Prevention of Torture. The guys from the Committee provided me with a very valuable legal aid, they consulted me, telling me about the laws. It was not only the legal stuff I learned about my rights that was important to me, there was also the moral effect. I learned that not everyone is indifferent to my fate, there are people in Russia who do not agree that one should be beaten only because they fly a Ukrainian flag, everyone has their democratic rights, and we are all citizens of a democratic state, and we all have the right to protection.