The Ukrainian delegation to PACE took an active part in the unprecedented overthrow of the Assembly’s President. Alexander Lukashenko continues to maneuver between Kyiv and Moscow. Poland appears very selective in interpreting the concept of friendship between states. The first hundred days of Donald Trump as U.S. president have been unexpected for many.

At the end of April in Strasbourg, Ukrainian parliamentarians and diplomats demonstrated that they were able not only to respond to challenges, but also take a proactive stance. In many respects, it was thanks to the active position of the Ukrainian delegation that PACE President Pedro Agramunt, who seems to have gone too far with his desire to return the Russian delegation to the Assembly, came on the verge of political death. That is, he still remains in office (mainly due to the fact that there is no impeachment procedure in the PACE), but he has been completely deprived of any influence on the organization’s decisions and support of practically all party groups. This case may become a perfect warning for the European politicians who bet on business as usual with Russia.

It should be noted that EU High Representative for Foreign Affairs and Security Policy Federica Mogherini during her Moscow reiterated the EU’s non-recognition of Crimea’s annexation. Meanwhile, the general position of both Mogherini and Russian Foreign Minister Sergei Lavrov claiming there is no alternative to Minsk agreements should mislead no one: each of the parties to these agreements has its own vision of an algorithm for their implementation.

The death of the OSCE SMM monitor who blew up on a land mine in the mission’s vehicle in the militant-occupied territory of Donbas has reminded that Russia does not intend to observe any rules of war in Donbas as its goals are radically different. The most urgent of them today is to destabilize Ukraine from within and discredit Kyiv in the eyes of the international community. The appeal to put Ukraine’s ex-prime minister Arseniy Yatsenyuk on an Interpol wanted list is an example of Moscow’s hybrid use of international police procedures.

Belarus leader Alexander Lukashenko together with Ukrainian President Petro Poroshenko took part in the events dedicated to the anniversary of the accident at the Chornobyl Nuclear Power Plant. The two presidents exchanged views not so much on the disaster that changed the life of their nations but on the current political situation. Lukashenko assured Poroshenko that the territory of Belarus will not become a springboard for Russian aggression. It is obvious that the leader of a neighboring state is not able to make a U-turn away from Moscow but he is definitely not going to breach his ties with Kyiv, based on his own interests. 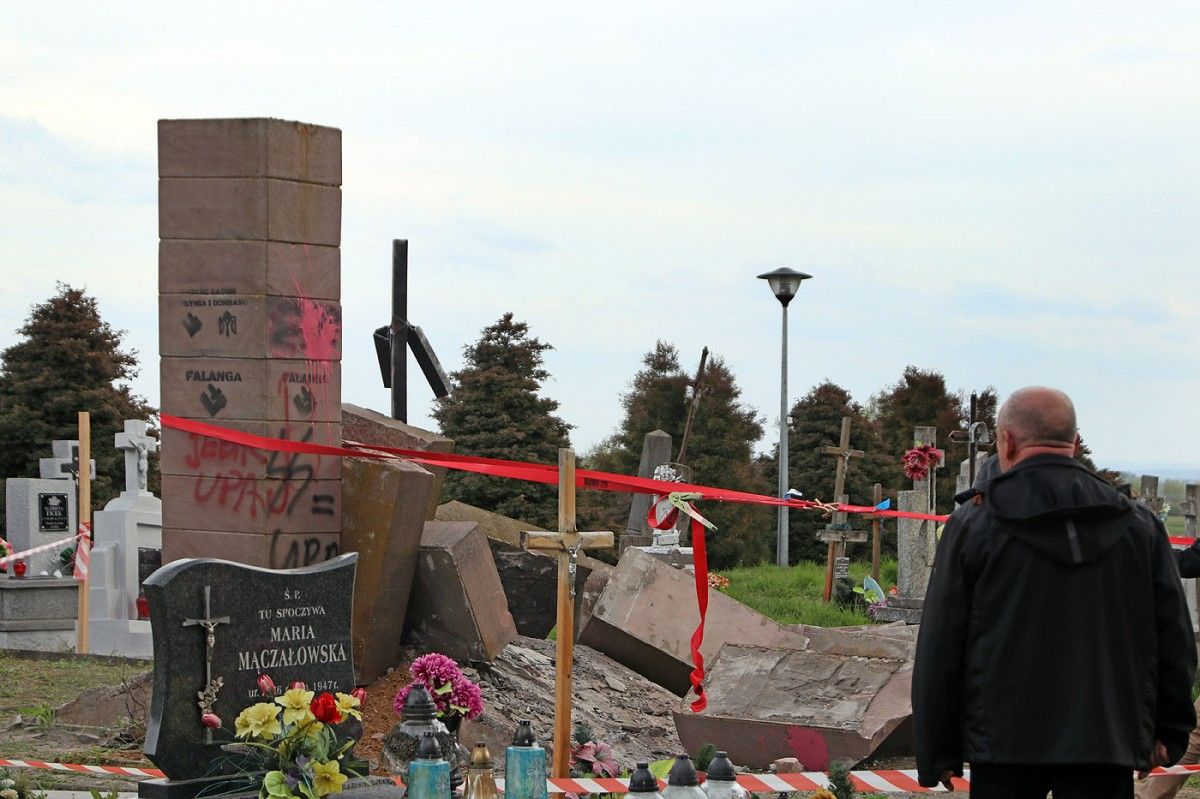 Poland is highly selective in interpreting the concept of friendship and strategic partnership / portal przemyski.pl

It's a shame to note that the Polish leadership is extremely selective in its interpretation of the concept of friendship and strategic partnership. The Ministry of Culture of Poland found no violations of law in the brutal take-down of the monument to the UPA [Ukrainian Insurgent Army] soldiers in the village of Grusovici, formally carried out by local authorities. It is noteworthy that yet another attack on the Ukrainian monument took place on the eve of the 70th anniversary of the “Operation Vistula” and confirmed that the Polish authorities had skillfully modernized the principle "all to friends, law to enemies."

The 100 days of Donald Trump's presidency allowed the world to once again see how great the difference is between the presidential contender and the head of state. In the context of Ukrainian-American relations, one can say that strengthening contacts with Washington is still on Kyiv’s top agenda. Although no formal cooling, projected by many, has happened, Ukraine has failed to become one of Washington’s strategic partners. As before, on Kyiv’s agenda there remains the need to become an interesting and promising partner for Washington, not just a recipient of various kinds of assistance.

If you see a spelling error on our site, select it and press Ctrl+Enter
Tags: UkrainePACEBelarusRussianAggressionMogheriniAgramuntUPA