Government officials cheerfully reported on the recovery of $1.42 billion from the accounts of Viktor Yanukovych entourage. The Ukrainian president is convinced that Russia will try to destabilize the situation in many Ukrainian cities. Anticorruption grinders came across the forks of Oleh Lyashko. 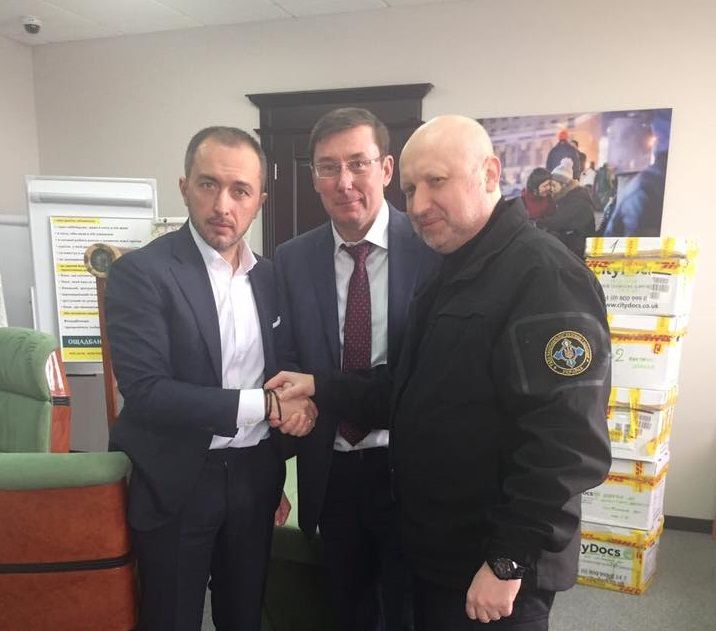 Yes, we did it – This was PG Lutsenko’s caption to the photo, commenting on the confiscation of $1.5 billion from Yanukovych and Co to the state budget / facebook.com/LlutsenkoYuri

The court-warranted return to the state treasury of an impressive sum was a victory, on which many state officials were happy to report. And it's not just about the fact that these funds should help boost the country's defenses, but also about a number of other circumstances. For example, the fact that the legislators failed to pass the law on special confiscation that was raised on the shield by the People's Front faction, and that Prosecutor General Yuriy Lutsenko is convinced that this was in no way the last recovery of funds. Viktor Yanukovych is already drafting a claim for protection of honor and dignity, although he is faced by a much more exciting trial involving high treason charges. Meanwhile, it is much more important for an ordinary Ukrainian citizen to see where exactly the recovered funds will go, and be convinced that there will be no more such embezzlement.

Demonstrative confiscation of the "Yanukovych stash" was carried out on the eve of the May holidays, which in recent years are perceived as a period of possible internal destabilization. Despite the complexity of the situation in Donbas, where the Ukrainian troops are under constant enemy fire, the rocking of the country from within gives the Kremlin much more prospects. It should be noted that the resumption of Donbas patrol missions by OSCE SMM can hardly stabilize the situation in eastern Ukraine, while the rest of the country is pretty wary of the ongoing conflict with Russia and the lack of significant visible results of reform. The moods are far from capitulatory, but many Ukrainians do need new reasons to remain optimistic.

The upcoming anniversary of the end of the Second World War in Europe has traditionally risen tensions and mobilized law enforcers. For example, in Mariupol, the street rally of the Opposition Bloc and the large-scale purge by law enforcers against possible members of illegal armed groups coincided in time. In Lviv, the so-called "activists" suggested replacing the Monument of Glory (to the Soviet soldiers fallen in WWII) with a monument to those who the Ukrainian troops killed in the Donbas conflict, as if not understanding the ambiguity of such an initiative. Even more short-sighted were the deputies of the Odesa City Council, who decided to return the Soviet-era names to dozens of streets. Thankfully, the move was cut by Mayor Hennadiy Truhanov after direct hints from Kyiv. Meanwhile, Russian propaganda TV channel “Russia 24” added more fuel to the fire by airing its own version of the Odesa tragedy of May 2, 2014, filling the documentary with background comments including words like "Nazis" and "fascists."

Meanwhile, the anti-corruption pace of NABU came across professional populist resistance by Radical Party leader Oleh Lyashko. He does not intend to calmly accept allegations of illegal enrichment (despite living in a prestigious mansion, being a neighbor of Yulia Tymoshenko) and resorted to a media counterattack. After numerous insults toward NABU detectives during his four-hour interrogations, Lyashko came to the office of the head of the Specialized Anti-Corruption Prosecutor's Office, Nazar Kholodnitsky, letting the latter feel how difficult it would be to fight against the owners of impressively experienced public speakers. In addition, Oleh Lyashko hints possessing secret knowledge about Ukrainian “backdoor diplomat” in the U.S. Andriy Artemenko being stripped of Ukrainian citizenship, which found no confirmation in any official sources.

At the sight of Lyashko's “righteous anger,” former fiscal chief Roman Nasirov's attempts to convince the judges that the electronic bracelet does not suit him, or the exchange of media bites between NABU chief Artem Sytnik and MP Mykola Martynenko, a suspect in one of NABU’s cases, appear to be just an informational background.

Meanwhile, most political players have taken a pause in their activity since in mid-April, either realizing their futility in the period of May holidays, or preferring to accumulate their forces for an autumn political offensive.