Rex Tillerson became the first high-ranking official from Donald Trump administration to visit Ukraine. Kurt Volker shaped his idea of Ukraine through a series of meetings in Kyiv. Jens Stoltenberg stressed that NATO's doors remain open to Ukraine. The Ukraine-EU summit was held without a final declaration. Russia showed its unscrupulousness to long-time partners from Siemens.

U.S. Secretary of State met President Poroshenko and with the team of young reformers during his Kyiv visit.  The chief U.S. diplomat reiterated the need to fight corruption with the call for the creation of an anti-corruption court. He also reaffirmed Ukraine in U.S. position regarding the Donbas conflict by appealing to Russia to change its stance on eastern Ukraine. Poroshenko stressed that Tillerson had briefed him on the outcome of Trump-Putin talks in Hamburg, also assuring the Ukrainian president that the situation in Crimea remains in Washington’s constant focus. Kurt Volker, the newly appointed U.S. Special Representative for Ukraine, an official with the experience of an intel operative and a diplomat, stayed in Ukraine for several days.

It is interesting that the White House began to spin the topic of alleged intervention by the Ukrainian Embassy in the course of the U.S. presidential campaign of 2016. It is doubtful that such assumptions can in any way be flattering to the Ukrainian diplomats. Allegations are more likely to be a distracting maneuver from the accusations of Donald Trump, his family and proxies in excessive contacts with various representatives of Russia.

Chiefs of the United Nations and NATO, Antonio Guterres and Jens Stoltenberg, have also visited Ukraine this week. Guterres limited itself to symbolic statements on supporting the restoration of Ukraine's sovereignty, while the Alliance chief was more verbose and substantive. He recalled that NATO trust funds had allocated over EUR 40 million for Ukraine, stressed that it will only be NATO Allies who will consider the issue of other applicants joining the Bloc. Stoltenberg’s visit and the meeting of the Ukraine-NATO Council were timed to coincide with the 20th anniversary of the signing of NATO-Ukraine Charter on a Distinctive Partnership. It should be recalled that over these years, the former Soviet republic has repeatedly changed its stance toward the Euro-Atlantic path. I want to believe that the stage has finally ended of Kyiv’s vague multi-vector behavior in its relations with NATO. 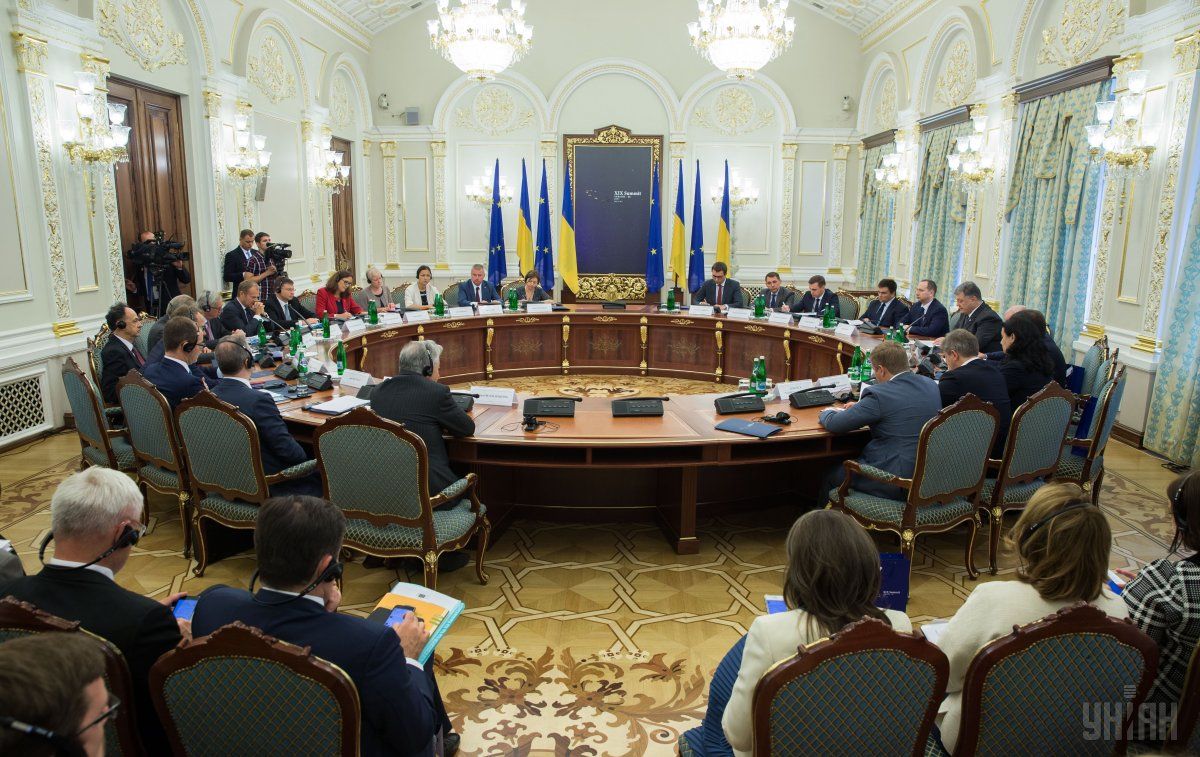 It is unlikely to be a coincidence that, following said visits, a draft law on the future reintegration of Donbas leaked to the Ukrainian media, suggesting a change in the ATO format into a special legal regime, in which the Joint Operational Staff created by the General Staff of the Armed Forces will be assigned the main role. Although this controlled information leakage is more reminiscent of probing soil, it is obvious that it is necessary to replace the outdated format of actions in Donbas, and to increase the level of legal protection for the Ukrainian military. Besides, the formation of legislation to counteract hybrid aggression does not lose its relevance both for Ukraine and other European countries.

The Ukraine-EU summit in Kiev left mixed impressions. On the one hand, the rapprochement was confirmed through the provision of a visa-free travel for Ukrainians and the completion of the process of ratification by the European Union of the Association deal. On the other hand, the Dutch reluctance to see in the final statement the reference to "European aspirations" of Ukraine has led to the fact that no final document was adopted. There is nothing strange in such position of Mark Rutte, that’s because he sealed his victory in Dutch elections, having made corresponding promises. Ukraine should not dwell on the lack of some final statements, but ensure real changes, for which both Jean-Claude Juncker and Donald Tusk have called Kyiv authorities.

Another welcome message is that Federica Moherini and Jens Stoltenberg, without conspiring, said that the EU and NATO do not have common approaches with Russia on the Ukraine crisis. Putin’s visit to Valaam island may bring new escalation - not at the front line, but in Russia’s religious affairs. After all, the anniversary of the baptism of Rus is approaching. Meanwhile, Russia taught its European partners an excellent lesson what it’s like to deal with the Kremlin, not only by bringing the Siemens-made turbines to the sanctioned Crimea, but also by trying to justify itself in a very childish manner.