Vladimir Putin’s visit in Crimea was being awaited with great interest – not only did it arouse curiosity of local inhabitants, but also that of international community.

In the course of his visit, Russian president was going to deliver a message dedicated to the annexed peninsula and to the state of international affairs after the imposition of sanctions by the West.

A few days before the arrival of Putin to Crimea, Kremlin’s spokesman, Dmitry Peskov announced, that president is going to deliver an “important speech”. Most commentators considered it to be immaterial: it was accentuated, that Putin did not say anything of real importance, while only repeating what he had said before. This is not entirely true.

Putin’s speech, as well as the entire visit, was aimed at internal use – it should be considered only in the context of the difficult situation in peninsula and possible decline of morale in the area. After a brief period of euphoria related to the rise of salaries and pensions, came a more difficult period of significantly higher prices and a lack of basic food products. This was mainly due to the rupture of economic ties with Ukraine as well as earlier than planned introduction of the Russian ruble. In addition, there were problems with water and electric energy, which were until recently supplied from the mainland Ukraine. 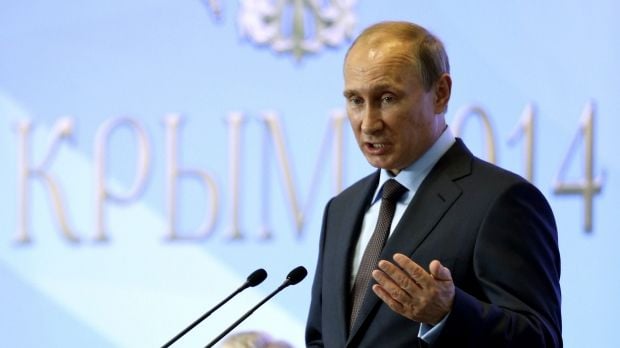 Additionally, despite the promises from authorities, this year’s tourist season will end in failure. In one of the comments from deputy spokesman of the US Department of State, Marie Harf said ironically that Putin is the only tourist visiting Crimea. In comparison to the last year, the number of people spending holidays in the peninsula fell by more than half, which will significantly influence the income level of a large group of population that is living from this sector of economy. The Russians who have decided to visit Crimea will not be able to bring good memories back home. There is an enormous traffic jam on both sides of the Kerch Strait, where people need to spend a few dozen hours waiting for the ferry.

The increase of dissatisfaction and disappointment of the local community would be disastrous for the image of the Kremlin. In Putin’s stay in Crimea one should to see the typical landlord visit of a leader who cares about common people, talks with them, recognizes their problems, and then immediately goes to fix them. So it was this time. Putin assured, that the difficulties are temporary, will be solved quickly, and the local population will experience a significant improvement in their situation. Apart from Putin, Crimea was also visited by the Prime Minister Dmitry Medvedev and almost entire political elite of Russia. The message was clear: authorities wanted to show the big importance of the situation on the peninsula and the fate of people living there.

The visit to the Crimea was criticized by the authorities in Kiev, and Ukrainian Ministry of Foreign Affairs came forward with official démarche. It was emphasized that the presence of Russian authorities in “temporarily occupied territory of Ukraine” is yet another violation of Ukrainian sovereignty, United Nations Charter and particular resolutions of UN and OSCE that are related to territorial integrity. Russia rejects the accusations, claiming that it did not annex the peninsula, and the referendum in March and separation of Crimea took place in accordance with the international law. Interestingly, the head of State Duma, Sergei Naryshkin claims simply that it was Ukraine who annexed Crimea after the downfall of the Soviet Union. “Vladimir Vladimirovich, on behalf of my fellow deputies of the State Duma, I would like first of all to thank for the fact that this meeting takes place in the broadest and open form, and for the fact that it is held in Crimea (…) which twenty three years ago, for various reasons, had essentially been annexed, and presently is again a part of Russia, an integral part of Russia, henceforth forever” – said the Chairman of Duma.

What Has Putin Promised?

At the beginning of his speech, Russian president thanked deputies for the attention paid to the development of Crimea and Sevastopol, and for the unanimity and solidarity of all parliamentary factions at that breakthrough point. He accused the Ukrainian authorities that the present difficult situation is a result of neglect. “There is a lot to be done here. Numerous problems have accumulated, that were not solved practically for decades. (…) Former authorities used to take a lot away from here, while giving little or virtually nothing in return” – said Putin. 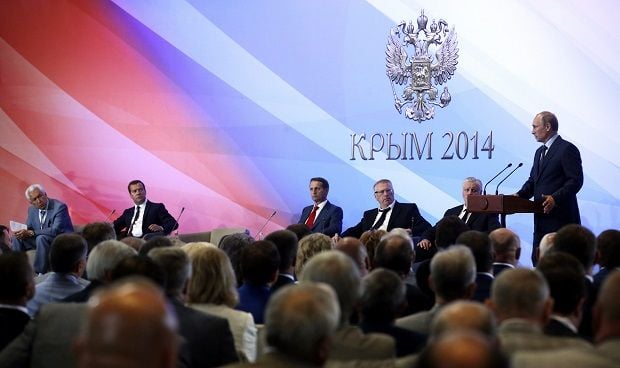 In addition, Russian president stressed that, exactly as a result of that neglect, Crimea is struggling with problems of outdated infrastructure, economy and low income level of most citizens. He assured that the difficulties are temporary, and the most important objective of the new authorities will be to ensure the dynamic growth of the peninsula, creation of new jobs, modernization of infrastructure, industry, development of the agri-food sector and the tourism industry.

In recent months, Russian authorities have made numerous promises to the people of Crimea. Realization of all of them, however, is unrealistic, and Kremlin has already pulled out from some of the investment plans or reduced their scope. A good example is the flagship project of building a bridge across the Kerch Strait. The initial plan was to dedicate around $10 billion for this purpose. Recent plan oscillates, however, around the amount of $4.6 billion.

Putin is aware of the high hopes of inhabitants of the peninsula, whose disappointment would be disastrous for the image of Kremlin. After all, he promised that after “repairing the historical injustice” and claiming back Crimea, the region will become a Russian “gem”, for development of which the authorities will spare no effort and resources. Consequently, Putin is making more promises and is willing to bear enormous costs. In the event of very probable obstacles, the “transition period” could always be extended or the blame put on Ukraine for the difficult situation on the peninsula.

The time for Vladimir Putin’s visit to Crimea was not chosen randomly. In the middle of September, there will be elections to the local parliament and Putin’s promises are a part of the election campaign, however even without this, the Kremlin-backed party will achieve a good result.

Developments in Russia and fulfillment of ambitious declarations are carefully followed by other breakaway-prone regions that have ambitions to join the Russian Federation.  For them, failure to keep promises made to Crimea would be a signal that a change in the current status quo might be not profitable: especially because some part of the local elite is being moved aside and replaced by Putin’s trusted people, sent to Crimea from Kremlin. For separatist warlords keeping power in their hands is an important matter and they are certainly analyzing the situation in Crimea also in this respect.

Ph. D. Piotr Bajor is an Assistant Professor at the Jagiellonian University in Kraków and member of Polish Association for International Studies.