Fifth column. What awaits OPZZh party without Medvedchuk at helm

House arrest of Viktor Medvedchuk does not contribute to his work as one of the leaders of the Rada's second-largest faction, "Opposition Platform – For Life" (OPZZh). UNIAN asked to what extent the high treason charges pressed against Medvedchuk will affect the OPZZh disposition, the ratings of this political force, and the sympathies of its voters.

The Pechersk District Court of Kyiv on May 13 ruled on 24-hour house arrest for Viktor Medvedchuk. With a high degree of probability, in the coming months, we will observe Medvedchuk fighting to remain in Ukrainian politics. First, this is because a political career helps business survive. Secondly, it's because, without political influence, he is unlikely to be needed here by his godfather Vladimir Putin. But no one should expect that this will in any way hit the rating of his political force. There are several arguments backing this point.

"Opposition Platform – For Life” is not a unified force, but rather a confederal association. The OPZZh is made up of different groups and is governed by different leaders. Medvedchuk is far from being the most charismatic (if this feature is appropriate on principle) of them.

"The OPZZh is a collective project, a marriage of convenience. Medvedchuk was not the sole leader in it. Yuriy Boyko was and will remain the formal leader. He is also the most rated leader. This will not change," said Volodymyr Fesenko, political scientist, head of the board of the Penta Center for Applied Political Studies. 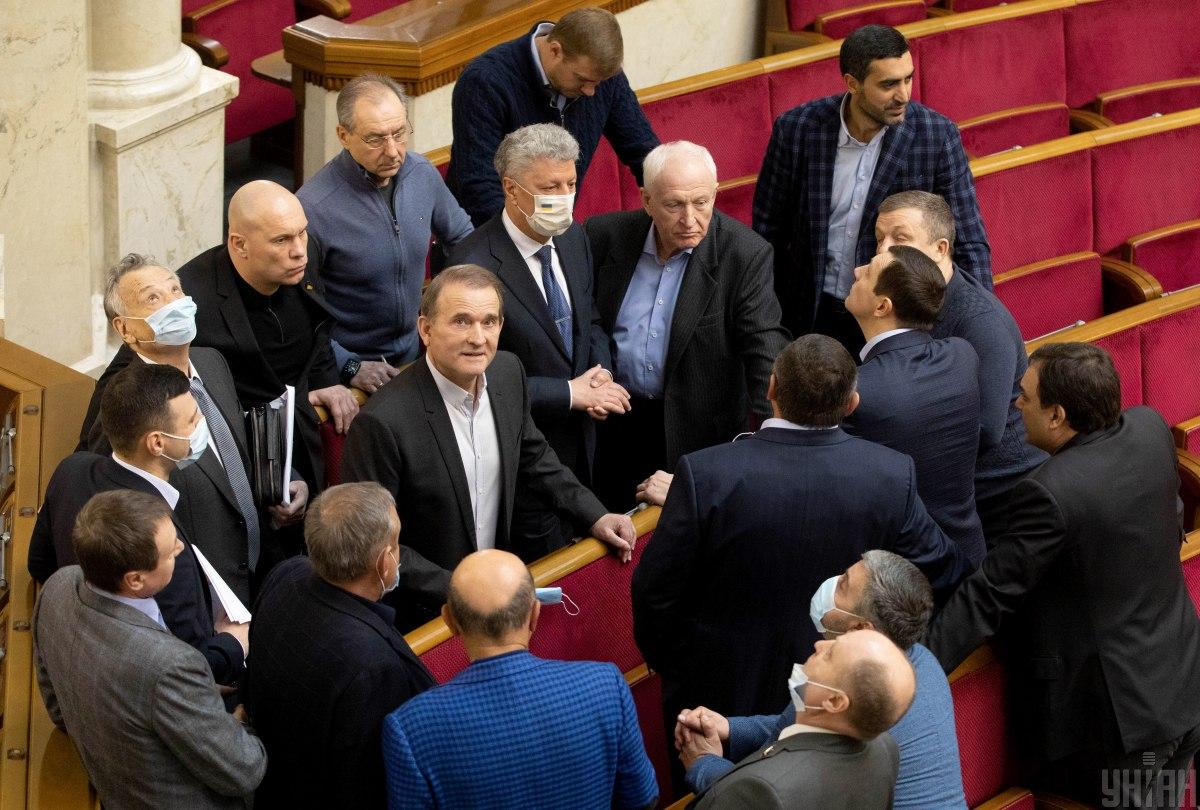 According to him, despite the fact that there will be a further weakening of the influence of Viktor Medvedchuk in this political force, while his group in it won't t go anywhere and will remain under his control. However, Medvedchuk's physical absence in parliament's session hall will somewhat weaken his influence. Thus, Putin's crony will be able to influence the situation in the OPZZh to a lesser extent.

"Most likely, the Liovochkin-Boyko group will act autonomously. They took a more moderate, flexible position, will maintain opposition, and at the same time – loyalty to the incumbent authorities. A group of businessmen in the OPZZh, conditionally Stolar's group, will also act flexibly. It will also distance itself from Medvedchuk. Thus, the degree of internal unity within the OPZZh will weaken," the political scientist believes.

Formally, Boyko and Co support Medvedchuk. But in practice, they didn't come to his court hearing. "Informationally, politically, they will rather distance themselves from Medvedchuk. They're acting autonomously. Therefore, we can say that the degree of unity and influence of the OPZZh will henceforth be noticeably lower. And this trend will prevail," Fesenko notes. 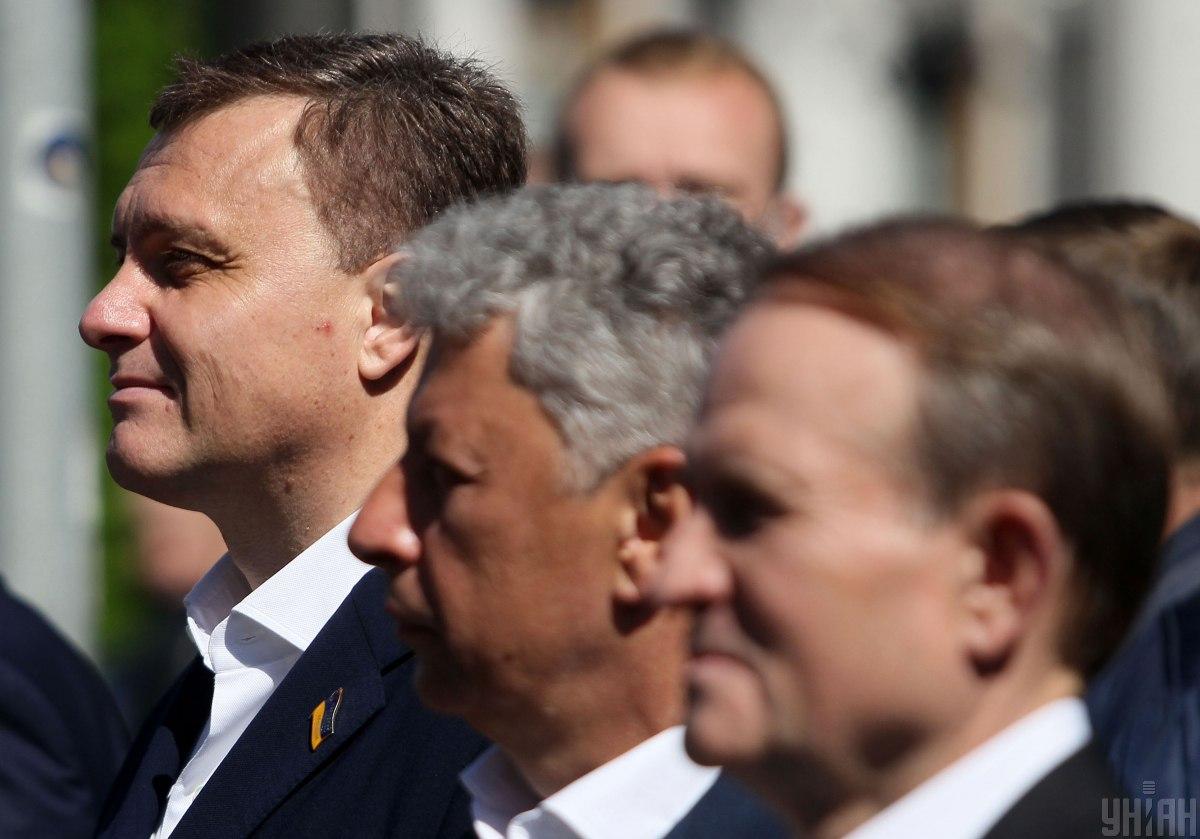 In other words, if we talk about a marriage of convenience as a way of formal cohabitation, the relationship will remain, but the "spouses" will "live separately". There will be no breakup. The group leaders will remain the same. But, as mentioned above, the most rated of them is by no means Putin's crony, but Yuriy Boyko.

Political scientist, sociologist, director of the Ukrainian Barometer sociological service, Viktor Nebozhenko, is convinced that the "spouses" have already grown tired of each other. "And now we are witnessing the form of an invisible divorce between the groups of Liovochkin-Boyko and Medvedchuk-Rabinovich, with Ilya Kiva who joined them," he notes.

According to him, Medvedchuk's rating is the one earned through hard work of a large team of political strategists, major financial investment, media support, and so on. "Therefore, it is difficult now to talk about whether the ratings of both him personally and of the OPZZh will rise due to 'repression', over the allegation that Medvedchuk is a 'victim of the regime'. Mainly it's because (this is a problem that leads honest political scientists to a dead end) that, due to the nature and character of our president, we don't know what this is all really about," Viktor Nebozhenko notes. "Whether it's about some kind of a wider show, staged persecution of Medvedchuk, or about real persecution." 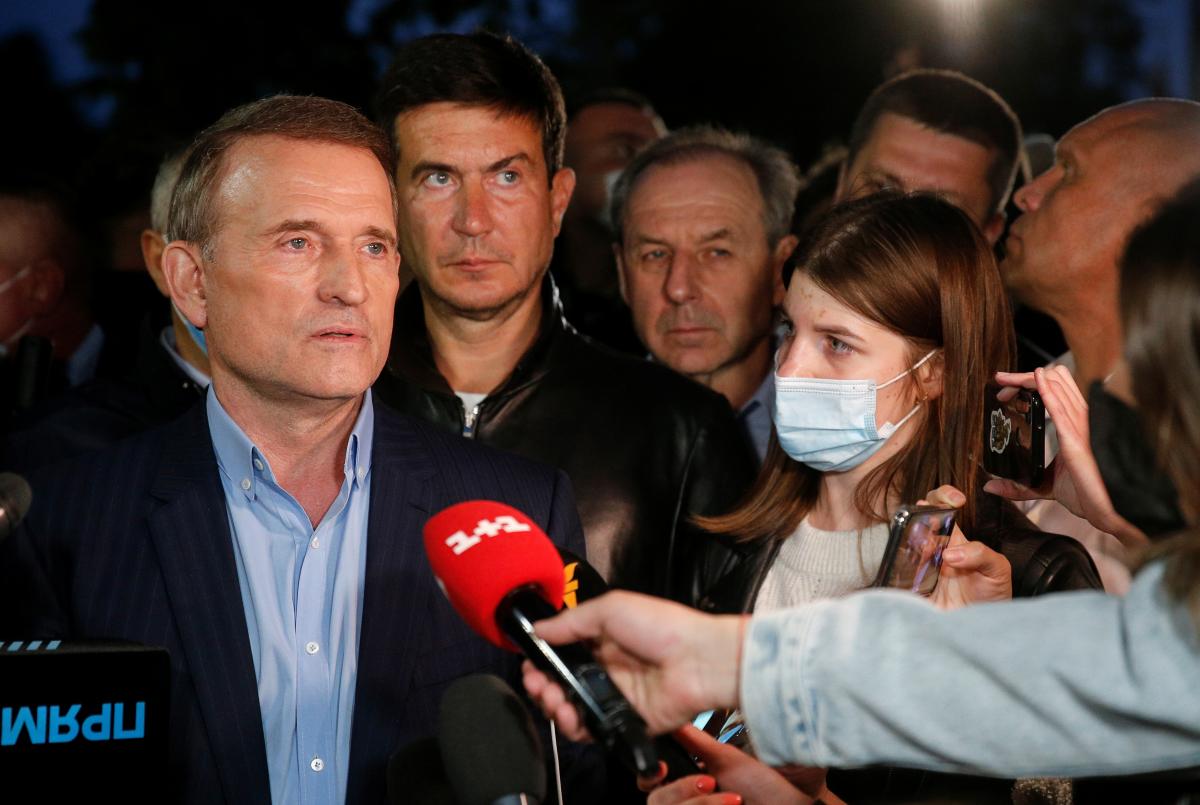 "I read the comments of some colleagues close to Medvedchuk and the pro-Russian camp, and they have long said and still say: "Attack on Medvedchuk," "repression against Medvedchuk…" But, excuse me, what kind of "repression" are you talking about? Comfortable house arrest," adds Volodymyr Fesenko. "When they say that what is happening will make Medvedchuk more popular, there's nothing like that. There is no growth in Medvedchuk's popular rating. And there's no growth in the OPZZh rating. On the contrary, the ratings have dropped."

But this didn't happen due to the high treason case. The fall had started a few months prior – when Medvedchuk's media outlets were blocked.

"As soon as the TV channels got shut down, the ratings of Medvedchuk and the OPZZh immediately plummeted. And the downward trend has been ongoing for three months already," says Fesenko.

Street "support" and "signs" from Moscow

Another point that political analysts note when talking about popular ratings and public support for OPZZh and Medvedchuk is that there were no supporters of this political force at a court hearing, except for the politician's "guards".

“Why doesn't the electorate defend Medvedchuk? Where are the old ladies, where are the youths, anyone beyond his 'army'? Where are those who believe in the OPZZh values?" asks Viktor Nebozhenko. 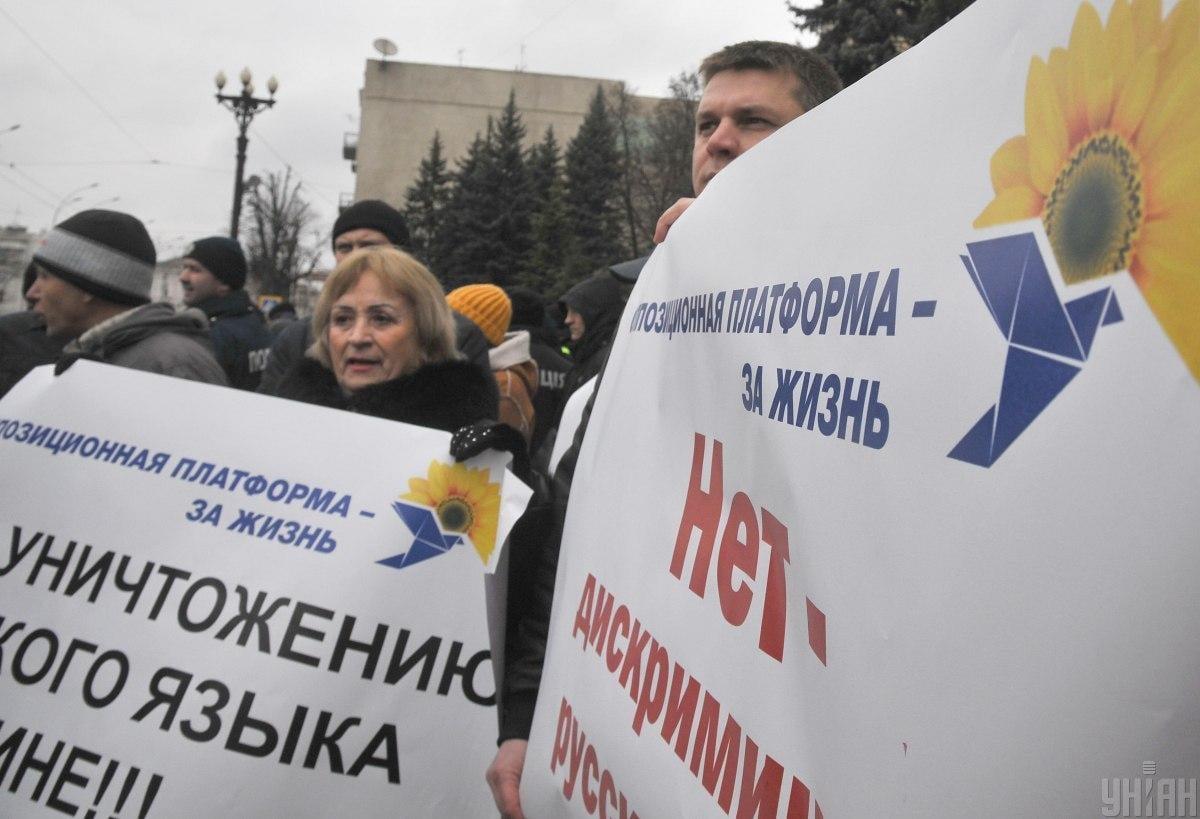 He recalls massive crowds outside and inside the courthouse during hearings of the Yulia Tymoshenko case. Also, he assumes this could be the case if some kind of trial one day targets the incumbent president, Volodymyr Zelensky. "But here [in Medvedchuk's case], it's only [Ilya] Kyva and [Vadim] Rabinovich,” emphasizes Nebozhenko.

According to him, the OPZZh electorate is inactive in supporting Medvedchuk at the moment, as these voters wait for a "sign from above" (read: from Moscow), expecting to hear a confirmation as to who has the authority now. "They need a 'coronation'. When Medvedchuk stubbornly repeats that he is Putin's friend, it's very pleasing to the ear of OPZZh voters. So they are waiting for Putin to protect Medvedchuk... The Kremlin is now supposed to say whether Medvedchuk remains 'tsar' or if there'll come a replacement for Moscow's envoys in Ukraine."

Viktor Nebozhenko believes that the more pressure is put on Medvedchuk, at least in a public domain, the louder another project working in this electoral field will speak up – Ukraina Nash Dim [Ukraine is our home]. "But without a sign from the Kremlin, the voters won't turn towards Kolesnikov, or towards Lyovochkin, or towards Boyko," he says.

In turn, Volodymyr Fesenko recalls that Viktor Medvedchuk's problems began earlier than the charges were filed against him and the court ruled on his house arrest. “And the Kremlin had already condemned 'persecution'. Therefore, they'll just keep condemning it, as they've been doing. This doesn't affect electoral matters," the expert says.

He believes the thing is that the OPZZh electorate differs from that of pro-Maidan parties or long-standing political heavyweight Yulia Tymoshenko – the type of voters who could be mobilized if needed. “Of course, there have supporters. There's plenty of them. But these are not the people who, at the first call, take to the streets to make the Maidan [uprising]. To get them all together, a "special operation" must be organized outside the courthouse: administrative resources must be mobilized, the crowd must be gathered, brought in, and their trip must be paid. Then they will come. This is not the electorate of nationalist parties who gather upon the call. Here the relationship is completely different. This is a conservative electorate. They might come to the polls, show support in social networks, but they only take to streets and squares when they are properly organized. And to this end, really hard work must be done," he says. 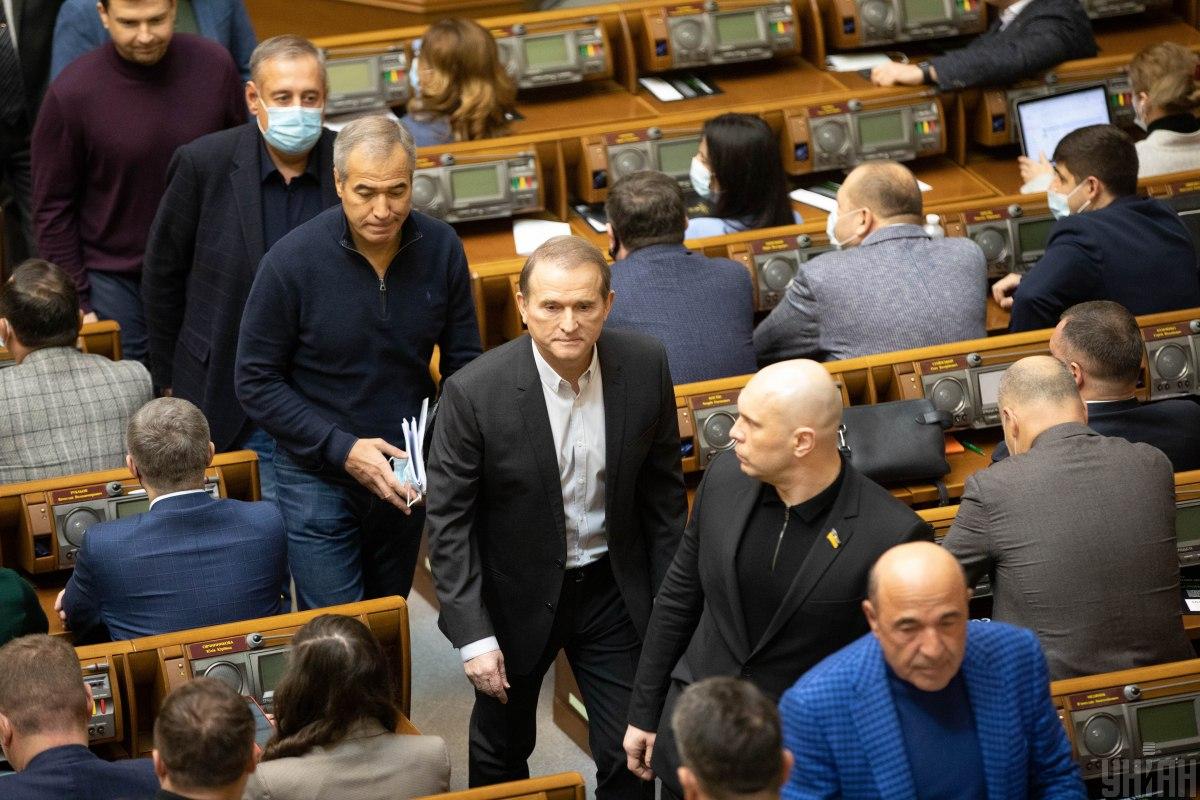 According to the political scientist, certain electoral outflow is, indeed, possible. Some voters could grow weary of politics altogether (as was the case with the Party of Regions' supporters in 2014). In addition, people affiliated with Akhmetov – Novinsky and Kolesnikov (the "Ukraina Nash Dim [Ukraine is our home] project], may try to exploit the situation to boost own influence. They may try to get someone from the OPZZh flip sides, so far informally. But they have no popular leader (Kolesnikov, for example, blew his parliamentary election campaign). Without a leader, any attempt to compete for voters may well be a failure.

In turn, the executive chief of Ukrainian Institute for the Future, Vadym Denysenko, argues that the OPZZh''s voters in the wake of the recent moves targeting party leaders may have actually united a little more. At the same time, it remains totally unclear how the "electoral swamp" will behave: "Logically, we should be seeing an increasing number of those frustrated over everything."