Archive data: OUN-UPA fought for Ukraine in Donbass region up to mid-50ies

“Significant formations of OUN [the Ukrainian Nationalist Organization] were created in the Donetsk Oblast: in Mariupol, OUN numbered up to 300 people…” SBU keeps on declassifying KGB archives about the nationalist movements in Ukraine...

“Significant formations of OUN [the Ukrainian Nationalist Organization] were created in the Donetsk Oblast: in Mariupol, OUN numbered up to 300 people…” “In the Dnipropetrovsk Oblast, in the second quarter of 1944, 711 nationalist were arrested, in the third quarter – 744…” SBU keeps on declassifying KGB archives about the nationalist movements in Ukraine. 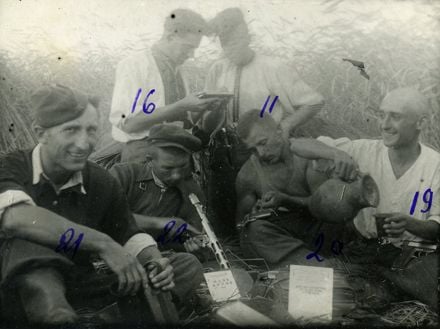 A regular public hearing, devoted to the activities of the Organization of Ukrainian Nationalists (OUN) in the south and east of Ukraine took place in Kyiv on March 13. The following are excerpts from the most interesting speeches:

The first program document of OUN, which was created in Vienna in 1929, outlines the main task of the organization – to restore the Ukrainian independent state.

OUN meant not only Halychyna or Volyn [traditionally pro-Ukrainian western regions], but was preparing to spread its ideas in the south and east of Ukraine.

When the border between two parts of Ukraine (the east and west) was wiped out in 1939, OUN received an opportunity to develop its activities in the east. As early as in 1940, NKVD began to arrest OUN commissars, who appeared in the east of Ukraine. In particular, according to the documents from the Sumy Oblast archive, OUN regional leader Ivan Klymiv (“Legenda”) trained staff for an underground OUN network in the east of Ukraine.

In line with guerilla reports, which I discovered in the Zhytomyr Oblast archive, there is evidence that in 1942 Nazis arrested a big group of members of OUN underground organization in Zhytomyr. The fascists withdrew from them documents, indicating that OUN planned its expansion in the east of Ukraine in advance. In particular, OUN planned that academician Bohomolets will become the President of the united Ukraine.

OUN activities in the years of Nazi occupation was carried out mainly by two wings – Banderivtsi and Melnykivtsi. Both of them tasked to restore the state of Ukraine, but used different ways to achieve that goal.

For instance, Banderivtsi managed to declare the Act of restoring the state of Ukraine in Lviv on 30 June, 1941. They planned that as soon as Ukraine is liberated from the Bolshevik occupation, the Ukrainian power will be established in the country. According to existing documents, the Ukrainian authority was declared in 12 Oblasts of the URSR [name of Ukraine in Soviet times]. Ukrainian nationalists aimed to go east, to involve all Ukrainian ethnic lands, including Cuban and Crimea.

However, German fascists were opposed to restoring the state of Ukraine, and pressed Banderivtsi to recall the Act. The latter refused, and were interned to Berlin.

Since September 15, 1941, German fascists decided to strictly punish the OUN underground network, and wiped out Oblast councils, which were namely that-time Ukrainian power.

All participants of pro-Ukrainian organizations, especially those connected with Banderivtsi, suffered repression – they were shot, taken to concentration camps. Some leading figures, such as Vassyl Kuk, were removed to the territory of Poland.

Since September 15, 1941, the Banderivtsi wing of OUN switched to underground. Since this date, Banderivtsi became openly opposed to the German occupation.

The most interested evidence about the OUN activities in the east of Ukraine can be found in the documents of their biggest enemies, the punitive squads of the Soviet power – NKVD. Interesting is the document, signed on November 30, 1943, by director of the Donetsk (then-times Stalinskiy) Oblast NKVD directorate, colonel Demidov. The document indicates the precise number of Ukrainian nationalist underground members: “Significant formations of OUN were created in districts of the Stalinskaya Oblast [present Donetsk]. It was established that in the city of Mariupol, the OUN organization numbers up to 300 members, in Kramatorsk – 120, in Slavyansk – 80, in Krasnoarmeysk – over 50, in Makeyevka – 60, in Maryinka – 80, Olginka – 30 people. OUN mostly involves intelligentsia – teachers, doctors, and also youth”.

The Ukrainian nationalist movement in the times of the Nazi occupation was widespread in all the regions of Ukraine. For instance, in the second quarter of the year 1944, NKVD arrested 711 nationalists in Dnipropetrovsk, in the third quarter – 744. The same happened in other regions of the south and east of Ukraine – in the Odessa, Mykolayiv, Kirovohrad regions and in Crimea.

The OUN activities were not interrupted after the Red Army came to the Ukrainian territories. There is evidence that the Ukrainian nationalist movement developed at Donbass mines in 1949.

Roman Shukhevych, being the OUN leader and chief of the Ukrainian Insurgent Army (UPA) in 1948-49, paid a big attention to expanding the OUN activities in the east of Ukraine. A special program, called “Orlyk”, was worked out. It stipulated to convey a significant part of Ukrainian nationalists from the west to the eastern regions, where they could hide until it is time to act.

Recently I have found in SBU archives a letter of Roman Shukhevych to Olga Hilkiv, who was his messenger. In several days before his death, he wrote about the significance of developing the nationalist movement in the east of Ukraine.

The SBU archives have, probably, the biggest collection of the materials about the OUN activities in the east and south of Ukraine. As of today, the precise number of documents, connected with OUN, has not even been established.

I would like to tell about types of the documents connected with OUN, which are kept in the SBU archive. 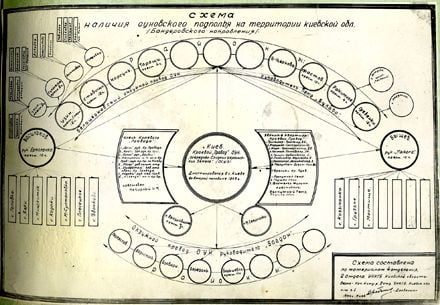 The first type of documents are direct materials of OUN. In particular, this is a collection of printed documents about the structure and activities of OUN and UPA. It includes instructions, orders, and reports of different underground figures. The materials date from 1941 to mid-1950ies in all regions of Ukraine. 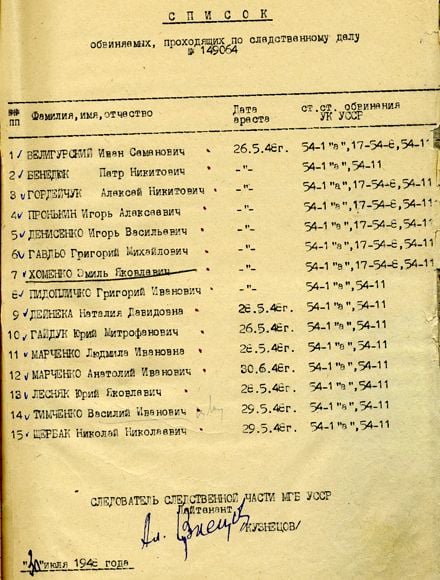 Another type of documents are photos. They were made by OUN members themselves, as well as by KGB employees. On the whole, the arrested OUN members were 19-25 years old. All of them were sentenced to a long period of imprisonment in Siberia. 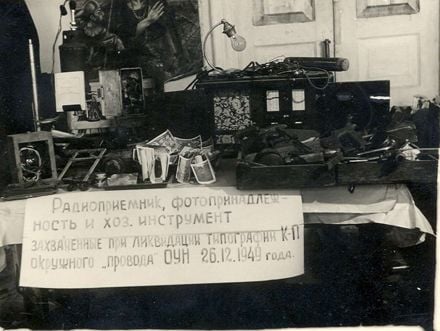 One may see at the KGB photo above that the OUN underground organizations had printing machines, produced books, which were spread among the population.

Another type of documents are thousands of criminal cases, brought against OUN members.

I want to show you a unique material, which indicates the self-sacrificingness of not only OUN underground organization members, but also the heroism of population. This material is from the Khmelnytska Oblast, about a peasant woman, Pavliuk by surname. She hid Kamyanets-Podilski OUN department chief Skoba. The woman was arrested by KGB in 1951, she was interrogated and proposed to give up the underground organization chief, she refused and was tortured…

Pavliuk was released, and told: “If you give up Skoba, you will survive! If not, we will arrest you”. After that, she, and all her family committed suicide, and left a unique note:

“Glory to Ukraine! Ukrainians, do not judge me that I lost my life. I did not want to pass the NKVD tortures. As early as on November 2, from 7 p.m., they were torturing my sister and my brother-in-law, and my niece. We died and we are proud of our death. Glory to heroes! We were pressed to betray the Motherland and give up the [OUN] leaders, but we took oath, and we kept this oath till the end of our lives. Glory to Ukraine! For you, Ukraine, we will not hesitate to drink poison, not to betray you”.

In the end of the note, there is a little postscript, which is very important: “Maybe, it will happen that somebody will remember our names in the free Ukraine”.

This material was kept in the KGB archive for 50 years…