Last weekend, in honor of Environment Weekend, activists across the country conducted a general cleaning. But is it only cleaning that helps deal with the litter problem?

In Ukraine, nearly 50 million square kilometers, which equals the area of Switzerland, has been littered with waste. More than 400,000 tonnes of waste is spread around landfills, which occupy 7% of the country’s territory. And the number of landfills is constantly growing.

Officially, there are over 6,500 landfills in Ukraine today, while there should be no more than 500, according to the EU standards. Chemical, domestic and other kinds of waste pose a threat to both the country’s environment and the lives of Ukraine’s residents. In particular, there is the problem of radon - a hazardous gas generated as a result of decay of waste remaining in soil. It is difficult to detect as it is colorless and odorless. But this gas is toxic, even radioactive. In addition, while the waste is decomposing in landfills, the toxic substances get into the groundwater, and that affects the quality of drinking water.

In Europe this problem is solved by recycling. Approximately 70% of garbage is processed. Therefore, waste gives the Europeans valuable raw materials, suitable for use in various industries. What cannot be recycled is incinerated, producing electricity and thermal energy. Switzerland has for many years been a European leader in recycling waste. That's because in this country every type of waste possible is sorted. Most Swiss households use five different containers for different type of waste - glass, paper, clothing, batteries, and plastic... In turn, the government commits itself to processing the collected waste. In this country 95% of the glass, 70% of the paper and around 80% of plastic products get a second life.

However, in Switzerland there also is a “program for the lazy”: if someone does not want to sort their trash personally, they can collect it in special bags that are sold at any store. The comparative price of these bags is around UAH 50. The collected money is transferred to the companies engaged in the further sorting and recycling of waste. If unsorted waste is thrown away in a regular package, a negligent perpetrator will be fined. The penalty is CHF 10,000 (nearly UAH 250,000). Furthermore, littering city streets may “cost” CHF 6,000 francs (about UAH 150,000).

Belgium went even further in the issue of the need for sorting waste. Here, special inspectors from the “waste police” are comfortable with checking bags with household waste and, if they discover some mistakes in sorting, the owner of the bag is issued a warning. For repeated mistakes, Belgians face a fine of about EUR 700. Interestingly, in addition to the separation of glass, plastic, paper, and other waste, even used cooking oil, must be thrown away separately in Belgium. If this type of waste is found in the “general” pile of garbage, an offender could face a fine of up to EUR 62,000.

In Germany there are “waste detectives” who monitor public places for signs of littering. As a result, a cigarette butt, wrapping paper or a bottle thrown on the street may result in a EUR 20 fine. An offender who throws out used chewing gum, an apple core, or other food leftovers may face a EUR 40 fine. Throwing old furniture, video and audio equipment out on the street may result in a fine ranging from EUR 150 to EUR 600... 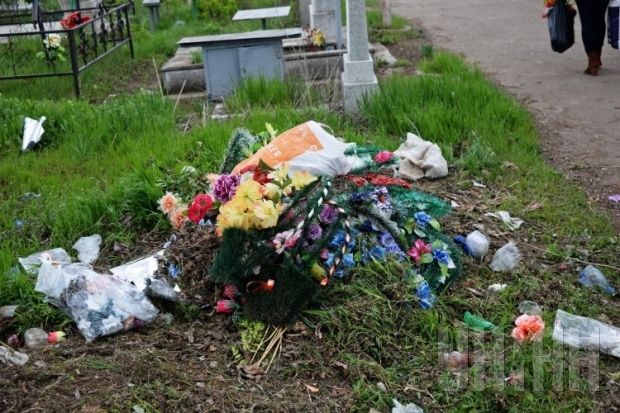 However, it would be wrong to assert that there are no businesses in Ukraine active in solid waste recycling. There are companies like GreenStep in Kharkiv, Obolon in Kirovograd region, Lion Recycling in Dnipropetrovsk, the Slavyane plant in the Chernihiv region, and some other businesses engaged in recycling of plastic waste. Glass can be recycled at the Utilit plant, and paper waste at the Obukhiv and Korostyshiv cardboard and paper factories. Their capacities could provide a second life for those types of used materials, but the problem is that they don’t get enough waste to recycle.

Ukrainians are just not used to sorting garbage. Out of nearly 30,000 Ukrainian towns and cities, the separate collection of household waste is only just being introduced in 496. Meanwhile, in Europe the system of waste separation is being taught from preschool age (there are themed cartoons for children that focus on the sorting of waste and its importance for the environment). In addition, according to the Ministry of Regional Construction, Housing and Communal Services of Ukraine, there are 21 waste sorting lines in 16 locations across the country, six of which are in Kyiv, while in another 14 such complexes are just being built.

According to Article 20 of the Law of Ukraine “On local state administrations”, it is the local authorities who are to deal with organizing the sorting of waste for further recycling. However, given the above, not all of them take on this duty with due responsibility: even not all of the capital’s districts and of other major cities have necessary containers for waste sorting.

According to Lyubov Kolosovska, activist of the public movement EcoDnepr, having a mechanism for setting the collateral value of waste goods would help local authorities encourage the Ukrainians to collect, correctly sort and bring their waste to special collection points. This has been widely practiced in Europe. “This mechanism works like this: When a person buys a container with something, for example, with some soft drink, they pay 25-30% more for it. That is, they pay both for the drink and the bottle, which can later be returned to a collection point for a refund,” she said.

However, even if there are recycling facilities, waste processing in Ukraine is not popular, as it is not economically advantageous – it is much easier and cheaper to take out the trash to the dump. For example, one container may hold up to approximately 20-30 kg of useful plastic per cubic meter. If sorted, it could be sold to the processor processing plant for an average price of UAH 3 / kg. That is, UAH 60-90 could be raised from just a single container. But considering the cost of fuel (bringing waste to the storage, bringing it for further sale), electricity used at sorting lines, payments for the staff, a very small margin is left at the end. At the same time, the tariff for waste disposal at the landfill is just UAH 40 per tonne.

Given that prices on the market for recycling are constantly jumping, most waste carriers don’t even try to calculate potential profits and see no reason to be constrained with processing - they just bring waste to the landfills. The reason for that is the close corrupt connection between “waste managers” and the city authorities, environmentalists say. “These companies often are communal, that is, there are the funded from the budget. They are interested not only in not building sorting lines, but also in not letting private, even global companies, professionally engaged in processing of waste, into this market,” said one of the leaders of the Association of Greens of Ukraine Yaroslav Zadesenets.

According to him, as a result, global companies represented in Ukraine that recycle more than 70% of waste worldwide, who are willing and able to build waste processing companies in our country, are not investing in the Ukrainian market.

By the way, placing the waste in landfills in Europe is several times more expensive than in Ukraine. For example, in the UK the cost of placing a tonne of waste in a landfill is equal to GBP 102 (about UAH 3,500). “If we want to achieve the same waste management system, the cost of waste burial in Ukraine should grow by several times,” said the representatives of Dnipropetrovsk’s Pravoberezhniy landfill.

The method of using waste as alternative fuel is hardly practiced in Ukraine at all. “We only have one practical example of the reuse of waste, that is the cement plant in Rivne, which uses the city’s domestic waste instead of coal,” said Maxym Barinov, head of the landscaping and public services for the Ministry of Regional Development.

In his opinion, this example should be followed in other regions of the country. This will allow the country to reduce its coal and gas dependency. However, solving this problem requires the participation not only of the authorities but also of businesses that could modernize their enterprises and use waste instead of fuel.

In the meantime, while the state and the businesses are just trying to find common ground in the subject of sorting and recycling, Ukrainians are taking the initiative in their hands. Increasingly, they prefer paper bags to plastic, choose glass bottles over plastic, and exchange documents online rather than print the documents on paper.

For example, Ukrainian musicians have already said “no” to paper tickets. They calculated that printing tickets takes about 29 grams of wood. This means that more than 500 kg of wood per month is wasted just for printing tickets for concerts in Kyiv alone. As a result, together with one of the ticket sale services, representatives of show business are boycotting the waste of paper in favor of electronic tickets. “Already, 71% of concertgoers use electronic tickets,” said Dmytro Feliksov, co-owner of Concert.ua. “The rest is courier delivery orders and box office sales. We have been coming to these figures for 2.5 years. E-tickets are accepted at all the venues in Kyiv and almost at all concerts in other cities. This is not the future – it’s happening now.”

Yulia Markhel, president of the environmental organization “Let's Do it, Ukraine”, makes her own contribution to the country’s environmental future. It’s been six months since she last used cellophane plastic. She has been replacing polymeric substances, which have a long decomposition period, with their paper analogues. “For six months I’ve been struggling with it. I buy milk in paper bags, and I never buy water in plastic bottles. Besides, instead of plastic disposable cups we buy paper [cups]. If I go somewhere to buy a lunch, I bring along my own container, so as not to use these usually offered plastic packaging,” she said.

According to the activist, it’s hard to get used to it, but “if we are fighting for a clean environment, we must start with ourselves.”