Back to a childhood without war

War eventually recedes into history, but memories of it remain at a subconscious level. Especially childhood memories. UNIAN has gathered expert opinions on how to rehabilitate Ukrainian children that have already seen enough war for a lifetime.

Psychological support is necessary for the children who have become displaced, have witnessed military action and even those who regularly hear about it. Memories of war are forever carved into childhood memory: the generation of 1930ies and 1940-ies of the last century still draws parallels today with the events that they experienced as children. So, the repeated experience, or just some reminder of a stressful situation can bring about both psychological trauma and post-traumatic stress disorder (PTSD).

According to a recent UNICEF report, as of April, the approximate number of Ukrainian children affected by the annexation of Crimea and the fighting in the Donbas amounts to 1.7 million. In addition, 154,635 children have become internal migrants. At least 174 children have been wounded in the east, while 65 have been killed in the fighting there. However, as of January this year, only 19,000 children had received psychosocial support or attended child-friendly zones established in Kharkiv, Dnipropetrovsk, Zaporizhia and Luhansk regions.

Therefore, it is not surprising that there are numerous stories today in Ukraine of children experiencing psychological trauma. “It was scary when we were sitting in the basement. But I want to return to my native city of Donetsk, I remember, there was a beautiful park there, with flowers,” 7-year-old Valeria says of her experiences.

Ruslana, the girl’s mother, said that she had appealed to psychologists for help, because the it was difficult for her child to endure “constant anxiety while in the conflict area and the uncertainty of resettlement.”

The problem is seen through the child’s behavior 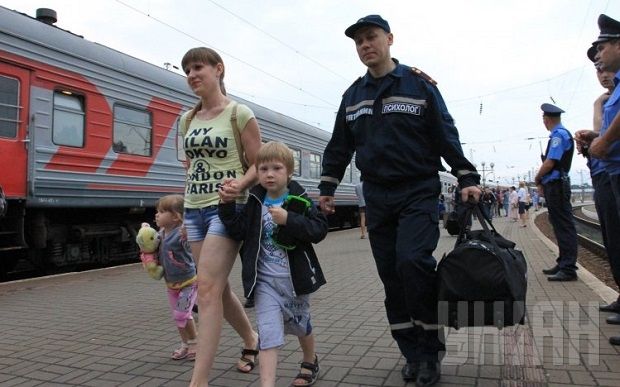 However, after being moved to a peaceful area, children can still continue to be affected by they have already seen, according to Yulia Bezkrovna, director of the “Future of Luhansk” Foundation. “For example, when a child is moved from an occupied territory, any sudden noise may immediately trigger a reflex – the shelling has begun, and there is a need to hide,” she said.

Thus, unlike visible physical injuries, psychological pain is often hidden. During the war, the children need psychological care and a new approach to education. “Children are anxious, children are introverted, and even their games are mostly associated with the war, when they need to hide somewhere... So, even in games there is something that reminds them of war,” said Olena Muzychuk, a senior researcher at the Institute of Psychology of Ukraine’s Academy of Pedagogical Sciences.

According to her, when the children abruptly change their behavior, parents should seek help. “That is when the child refuses to eat, or has poor sleep, or wakes up at night, screaming out loud,” says an expert on children's symptoms of psychological trauma.

Experts from the Crisis Center for medical and psychological assistance of the Institute of Psychology and the National Medical University say that the main way to overcome children’s stress and PTSD is family support. “Children see the world through their parents’ perspective. So it’s their parents who form the children’s attitude toward the world and to certain events. That is, it’s very difficult for children to distinguish a real threat from an imaginary one,” says Olena Muzychuk.

According to her, posttraumatic syndrome can be avoided if parents treat children the right way. They need to explain that the situation [in a safe place] is not the same as it was before; that their family now is in different conditions, but it’s getting by; that together they can do everything… They have to speak with their children via their actions, telling them, “I am with you and I am here to support you.” “It is important to talk to children, to discuss problems. If you suspect that something is wrong with the child, you should just talk to them about anything that concerns them. Also, the problem could be identified through a game. Just play with the child, and it will become clear what to pay attention to,” stressed the expert. 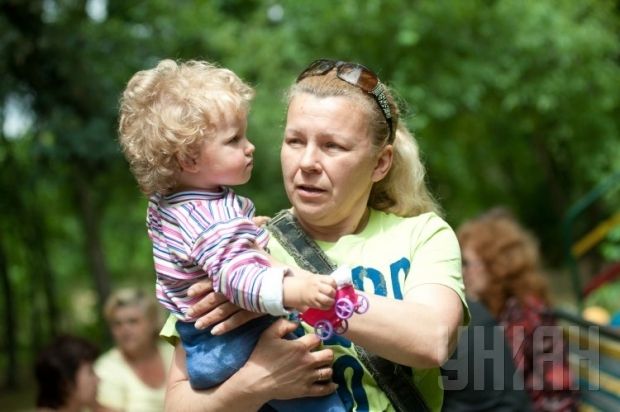 There are special therapeutic programs that help to get rid of children’s stress and PTSD. Viktoria Gorbunova, Doctor of Psychological Science, a leading researcher at the Institute of Social and Political Psychology of the National Academy of political sciences of Ukraine, a therapist, and assistant professor of social and practical psychology at the Zhytomyr State University notes that “programs based on cognitive-behavioral therapy (CBT) have proved to be effective; CBT is a first choice method worldwide when dealing with PTSD.”

Briefly, there are three main instruments to this method. First, tell the children what is happening to them and that all symptoms are a normal reaction to abnormal events. For example, for 7-8-year-old kids, a fairy tale is a good means for dialogue. Second, teach the children emotional regulation skills, such as learning to face particular triggers (reminders that provoke negative reactions). For example, firecrackers or fireworks can provoke fear because they are associated with shooting.

Third, create conditions so that the children don’t suppress their emotions, can talk, draw, or write for adults about their traumatizing stories in a safe environment. Adults should listen carefully. “That is what I say to the children - ‘What the bad memories like the least is being revealed to others, [because] then they disappear and do not cause pain,’” says a psychotherapist.

According to Viktoria Gorbunova, children can hardly be protected from the constant flow of information about the war, but they can be prepared. “For example, give them an explanatory model of what is happening. Of course, we would say different things for every age, but the main idea is preventing the child from making up terrible stories, but having a logical explanation of events instead, without false alarms and catastrophic exaggeration. However, you should not let children (especially small children) watch TV, or emotionally discuss some horrifying details in their presence. However, you can’t conceal information either,” she says.

The expert noted that PTSD can “strike” at any age. “It could seriously affect future relationships, the strategy of how a person builds his life or trusts others as an adult, the ability to be open to others and even to love. However, it is not worth over-exaggerating the effects of PTSD. In 70% of the cases, PTSD (if present, as the experience of trauma does not always lead to the disorder) disappears without the expert intervention, as support from adults and a change of surroundings are enough,” she said. 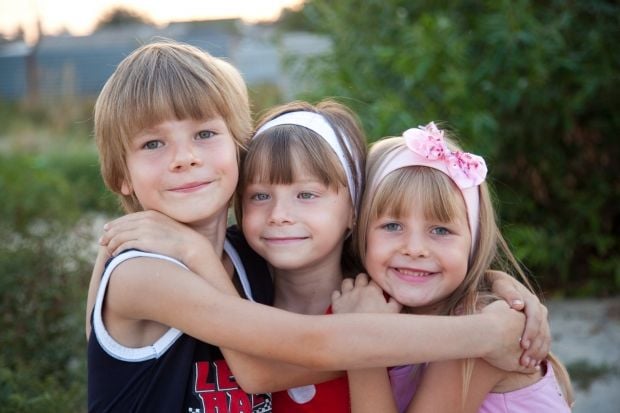 One of the ways to provide support and change circumstances to overcome stress is a photo shoot, the volunteers suggest. For example, the charitable project “Children of the Heroes” provides free photo shoots for the children of the Ukrainian troops. The goal is to give the families some positive emotions.

Project coordinator Maria Konishevska says that families of the men that protect Ukraine are in constant stress. “And we, as photographers, can cheer them up a little and distract them, offering a photo shoot. A photo shoot is not only about the resulting photos, but also about creating an image. We engaged make-up artists, hairdressers, and handmade-masters, who bring wreaths and other accessories to the studio. So we make a little party for the children,” Konishevska  says.

The volunteer mentions that at first the activists were worried that the families of the military would have things on their mind other than parties, even small ones. “But now they are very grateful - grandmothers, parents, and kids. They say that they haven’t been so happy for quite a while,” says Konishevska.

“Families with many children come, and so do families who lost a father or whose father is seriously wounded,” she continues.

Currently, about two hundred photographers are involved in the project, having already made over a thousand photo shoots of children in nineteen regions of Ukraine. Also, volunteers are planning to hold an exhibition on June 1, to draw attention to the issue, as there really are a lot of such children. “We want to draw attention to these families, because they need support from the state (both material and moral),” said Konishevska.

Children whose fathers were killed or injured in the war need special attention. A mentoring program for the children of the heroes of the ATO [anti-terrorist operation] of the “Lviv Education Foundation” charitable organization is intended to help these small Ukrainians. The project supervisor Marianna Bilyk says that the idea to provide such support arose when the first news of the victims in the conflict area came in. "We decided to make a program where each volunteer, each mentor takes care of one child of a hero. That is, they spend time together, they go outside together, learn, visit theaters, hold various workshops - various activities for educational and leisure purposes. Today, 15 mentors from Dnipropetrovsk, Kremenchug, Kyiv, Lviv, Lutsk, and Kramatorsk work across Ukraine,” she said.

Mentors are young people aged 18 to 35, who are taught by practicing psychologists the hints of working with the children who found themselves in crisis. “Anyone can apply, but in order to become a member, it is important to be a responsible person. It is important that there is such a family in your area, so that is locally convenient, so you can meet more frequently, as it’s not supposed to be a short-term contact. In fact, the person is the most important criterion for selection,” says Marianna Bilyk.

In general, all experts believe that complex support will help children to overcome psychological trauma and avoid PTSD. Concern of others, understanding and love of close friends will contribute to any child being able to enjoy a peaceful life again, and most importantly, not feeling burdened by war like an adult, but returning to their carefree childhood.