Nadia Savchenko: Remind Putin that the era of slave trade is long gone

Nadia Savchenko, the Ukrainian captive of the Russian President Vladimir Putin, has said in an exclusive interview with UNIAN said that she treats with great caution the information on her exchange, insisting on an all-for-all or one-for-one swap.

Having spent a year and a half in Russian jail, Nadia Savchenko became the most famous hostage of the Russian president. Moscow law enforcers accused her of killing the reporters from Rossiya TV channel, who entered the territory of Ukraine illegally in the summer of 2014 to provide media support of the Russian invasion. The Kremlin is not bothered with the fact that at the time of their death, Savchenko was already in militant captivity. The authorities decided to formalize her abduction and transportation as “illegal crossing of the Russian state border.”

Protesting against yet another extension of her arrest, Nadia went for a hunger strike. In almost a month without food, she has lost more than 15 kg. The Court of Donetsk (Russia’s Rostov region) does not allow reporters to film Savchenko or take her pictures, so that the world does not see the state of her exhaustion. However, despite grave physical condition, Savchenko keeps her fighting spirit up and is ready to continue the struggle.

Savchenko’s lawyers offered an interview with the Ukrainian captive to any media who would bring up the issue of Nadia’s release at Vladimir Putin’s annual press conference. UNIAN has for the second time taken this opportunity. The answers from imprisoned Ukrainian MO and fighter pilot to UNIAN’s questions were handed over with the assistance of diplomats from Ukraine’s Consulate General in Rostov-on-Don.

In her second exclusive interview with UNIAN, Nadia Savchenko said she was very cautious about the information on a possibility of her exchange and return home. She stressed that there should be an all-for-all or one-for-one formula for the swap, rejecting being exchanged for two Russian GRU [military intel] officers.

Nadia, how are you feeling after launching a hunger strike? Is it worth it exposing your health to such risk in the final stage of the trial, ahead of the possible exchange?

My condition is as usual. I can take it! You’re saying, it’s the final stage of the of the trial and a possible exchange... I don’t believe in fairy tales ... I know that if you want a miracle, make this miracle happen yourself! If I don’t do what I can, if I don’t fight, there will be no miracle and no exchange. So, it’s all not in vain! And it's worth it!

At his annual press conference in late 2015, Russian President Vladimir Putin admitted that you are a hostage. He also started bargaining  your exchange. He said that the exchange should be "equal." What do you think about this? Would it be justified to exchange you for two GRU officers, or should the swap be equal - "one for one" or "all for all"? Are you personally ready for the exchange? How do you see it? Perhaps you would like to be exchanged for some specific individual?

When people talk about the exchange, I feel a little like at the auction or at the trade house. But this is political trading, and I am also a hostage to "big" politics. But a human life is worth no more and no less than the life of another individual. Therefore, there can be no swap for two GRU officers. It must be either “one for one,” or “all-for-all” along with reconciliation and mercy, just to forget about this damn situation! I don’t know, what the “equal exchange” is in Putin’s sense, but my life is worth more no more than the life of another person. I don’t belong to him, so he mustn’t think that he can exchange me for privileges and benefits for himself and for the Russian authorities! The era of the slave trade is long gone, in case he doesn’t know yet.

Do you personally believe that you will be released and you will return home soon? What do you plan to to do first when you come back home?

I think, had I not believed, I wouldn’t have survived. Upon my return to Ukraine, I will first of all flee from the people into the forest and come to my senses, learn to love people again, and then come back and start thinking about my work and politics... If there is time. And if not, then I’ll simply go to work the next day I return.

What do you miss the most, being in a Russian prison? Perhaps some sort of food, or some certain thing?

I miss freedom! I miss clean, fresh, and free Ukrainian air! The sound of my native language! The sky!

Do you communicate with anyone while in jail? What is the attitude of guards and other prisoners toward you?

Unfortunately, I’m in complete isolation. I have no access to the prisoner's world. It’s not really a prison to me, it’s more like a damned monastery! So I don’t even know, what the other prisoners feel about me, or if they even know I’m there. Sometimes when I am being transferred through the corridors or outside the building, I hear people screaming from the windows of the cells: "Nadia, hold on!" So, I guess, they know about me, and understand the situation. And the guards are always polite. We have a business relationship. I’m polite with them, and they also are, with me. Sometimes I see understanding in their eyes, compassion and support. Sometimes I just see that they were ordered to do their job according to the protocol, and nothing more. It can be different.

Where do you find the strength? You have already been in prison for over one and a half years…

In hatred! And in love! It depends. It’s like I’m walking on a sharp blade of a knife, tilting in one direction or another, and then there is this abyss... I find the strength in myself and in what I believe in. 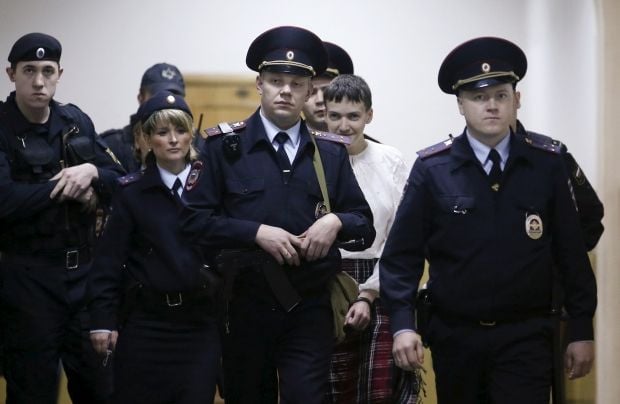 Which politicians from Ukraine and from around the world are in contact with you?

No one. Sometimes, I receive greetings, or some appeals, but it's hard to call a “contact” or fruitful work.

What you know about today's Ukraine? What is your opinion about corruption that continues to erode the country amid war?

All I know about Ukraine is a continuous acute pain. I know everything and understand everything... The most horrible thing is that I can’t do anything about it, and it’s killing me... But it also forges my anger. The time will come when all these forces will find their way out in the sake of a right cause.

What would I wish? Do they lack anything?! They already have everything. Maybe, conscience, but they’ll never have it, it’s too expensive for them!

What would you do first if you became president of Ukraine?

Is it time already?! I would have refused. And if they didn’t let me and told me that it’s my duty, I would just clench my teeth and do my job. I would do it the same way as I gave the oath of allegiance to the Ukrainian people, however difficult it would be. And if people asked me to go, it would have stepped down and thanked them for their cooperation and trust.

What do you think about the ultimate populism in Ukraine, which in fact goes down to a formula of "vote for me and everything will be free, you wouldn’t have to work"?

It's cheap, it has no creativity and taste! I'm surprised how the people keep falling for it. Aren’t we tired yet to lie to ourselves and the people?! Let's finally create something new and interesting. Maybe we should speak the words of truth? Maybe it will surprise both the politicians and ordinary people, and result in real change? 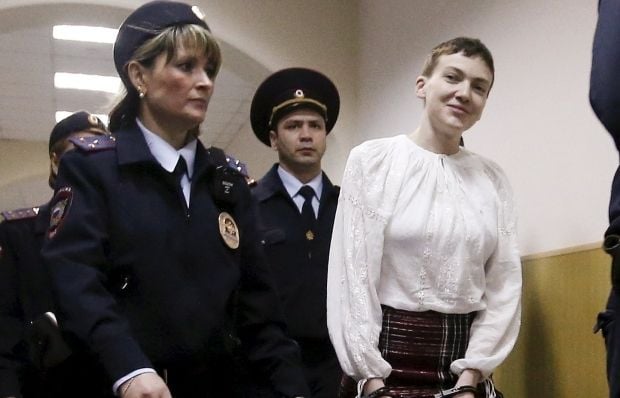 In your last year’s interview with UNIAN, you wished the Ukrainians “to stand strong and not fall in despair." What are your wishes to the Ukrainian people this year?

We have stood strong, and I know that we have not lost our faith. I know from the thousands of letters I receive from the people that we have awakened our national spirit, and our inner strength was born. Now I wish the Ukrainians to prove to the whole world that it’s possible to create miracles with our own hands! That we can surprise the world by defeating the invincible: the human rot, corruption, envy, ignorance, cowardice, inferiority, and greed.

Are you satisfied with the political force, which enlisted you to the Parliament? How aware are you of the Ukrainian parliament’s routine?

If you pledge, don’t hedge! Political activity of a party is a team game. If I’m in this game, I must do everything so that the party acts taking into account my opinion and my position. While I can do nothing, I there’s no point in the empty talk! If you can do something – do it, if you can’t - be quiet! I have little information on what is going on in parliament. And I have even less opportunities to influence the situation. But it’s only for now...

You have expressed willingness to bail out UKROP party leader Hennadiy Korban, but the prosecutor questioned the authenticity of your request...

I heard that the prosecutor questioned it, I just can’t understand why? If he wants, he can come here, to the Russian jail, and I will personally confirm it. Yes, I'm ready to bail out this person. I wrote a personal letter to him and an open one, reaffirming my will to do it. Unfortunately, the judicial system we have in Ukraine is unable to judge fairly and equally. Somebody is tried for the crime, while somebody escapes justice. When we learn what fair justice is, then we will put to trial everyone who deserves it. Meanwhile, as long as a person’s guilt is not proven, no one has the right to deprive them of freedom. I have gone through this, and I know very well what I’m saying!