Despite the differences in society over the situation in the east of Ukraine, the citizens are united in one thing: Donbas is part of Ukraine. UNIAN tried to determine what the residents of the temporarily occupied territories felt and what they are silent about, two years after the war began.

There remain very few supporters of the current "regime" in the occupied areas of Donbas. Even some of those who were dreaming of joining Russia two years ago, are now getting more and more nostalgic, reminiscing about their life under the control of Ukrainian authorities. While it is relatively difficult to get information from the “other side”, some issues that are especially “hot” still make their way here– just like it is difficult to hide an eel in a sack. People living under occupation are making their discontent increasingly apparent in their posts on social networks, some even taking to the streets to protest.

Education for "those who fought for the ‘republic’”

Mostly, it is the reforms, which the princelings of the so-called "DPR" had vowed to introduce, that are proving to be their undoing. The “reform” of the education system is an example. The Ukrainian language and Ukrainian history classes were canceled at schools, and the curriculum saw some change, such as the introduction of lessons on patriotic education and "citizenship awareness", which the parents quietly "swallowed". Many graduates of the “DPR” universities were promised diplomas from Russian universities. Today, these "rose-colored glasses" are in pieces.

For example, a Facebook community called "The Chronicles of DPR" published the story of a student who graduated from the university in occupied Donetsk. The young man said the students, who had not been moved to the Ukrainian-controlled Vinnitsia along with the evacuated Donetsk National University in September 2014, were deceived with the promise of Russian diplomas. Also, a new requirement was introduced -- the graduates had to get straight As to be eligible to achieve such an “award”.

There were also cases when school graduates from "LPR-DPR", who came to apply to the Russian universities, were sent back. "You have your own universities, so go and study there," were some of the comments of the Russian educational authorities.

At the same time, universities in the occupied territories of Donbas were also full of surprises. According to Donetsk resident Tetiana (last name not given for security reasons), whose child faced a problem of getting higher education, entering the university free-of-charge is a prerogative of "students who "fought for the 'republic'" or the children of the militants.

Notably, the Ministry of Education of Ukraine is addressing the issue of getting admission to Ukrainian universities for children from the occupied territories who chose to continue their studies in Ukraine, adjusting the examination model according to their situation.

"Tax reform" in the "DPR" has been leading to an even more interesting metamorphosis of the local population. When in the spring of 2014, pro-Russian separatists seized power and declared their "independence", a pseudo-referendum was set to be held in the town of Snizhne in Donetsk region. Twenty five-year-old local resident Dmytro (last name excluded for security reasons) was extremely happy, handing out to all his friends' handmade invitations to cast their votes. Two years later, he is deeply disappointed with his choice.

Dmytro used to be an entrepreneur. For nearly 10 years, his family ran a small network of grocery stores. The realities of the "DPR", which he supported at the stage of its creation, made the business environment significantly more complicated. Local businessmen, including Dmytro, complain that the entrepreneurs are being run to the ground with exorbitant taxes. In addition, small-scale entrepreneurs are struggling to compete with the low prices in the so-called " republic’s first supermarkets", which are enticing even their former permanent clientele.

Rumor has it that dumping prices by the former ATB network (now the "republic’s first supermarkets") is made possible due to the fact that the stores, controlled by the self-proclaimed leader of Donetsk militants Alexander Zakharchenko, sell a large number of Russian products from the so-called Russian humanitarian convoys, as well as foodstuff smuggled from the Ukrainian government-controlled territory.

It is not surprising that such actions have caused a flurry of discontent among local residents. "They are taking away everything. Previously, we could bribe someone just once and be sure that we could go on working without disturbance. Now we have to pay each month," said an outraged Dmytro.

Given the specific situation in the region, the local residents tend to vent their anger mostly on social networks. Similar complaints can even be seen on forums of certain anti-Ukrainian communities on VKontakte (Russian variation of Facebook). 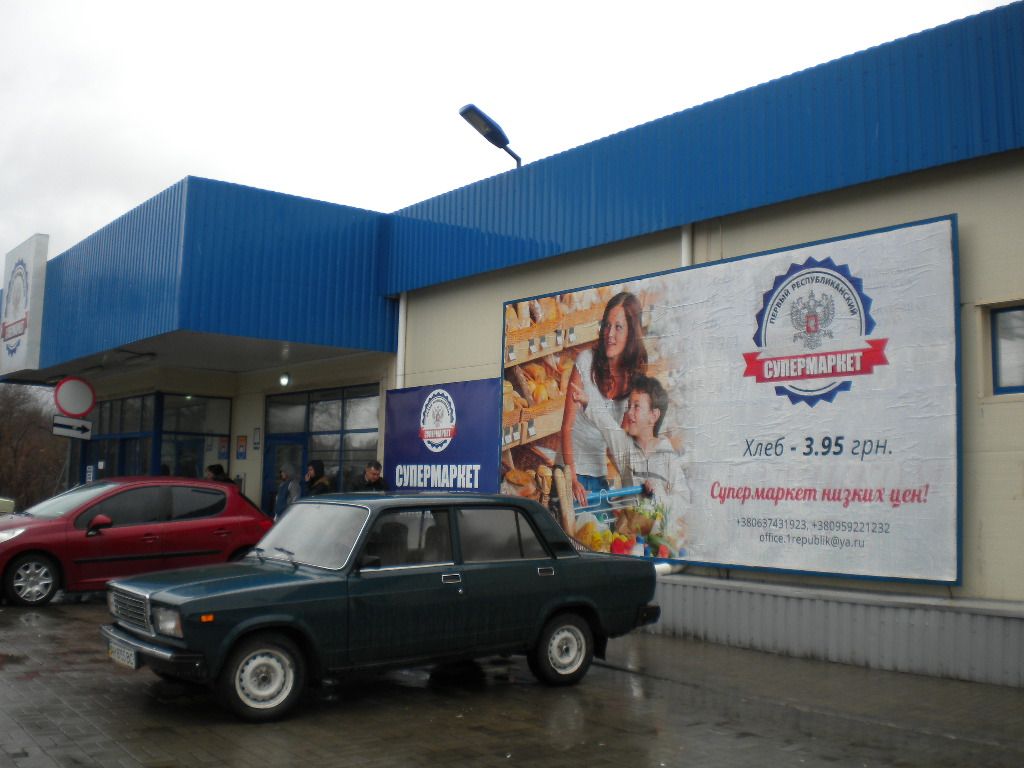 However, in recent years, those who dared to continue to do their little business in the areas controlled by militants, slowly began to take their protest to the streets. In May 2016, the people openly protested in the militant stronghold of Donetsk and Makiivka, and in early July, they were joined by businessmen from Horlivka. Even the fact that the punishment for participating in unsanctioned rallies is temporary detention did not stop the people. "Small businesses are fed up with inspections and exorbitant fines," a vocal supporter of the “DPR”, Roman Manekin, wrote on a social network.

And, it seems, the militants will continue to do so. The active process of so-called nationalization is underway in the “DPR”: all foodmarkets, previously owned by private individuals, are being returned to the "state" property, under control of the newly-established "Donbas Markets" company. According to information posted in one of the separatist communities on VKontakte, among the already nationalized markets are the ones in Makiivka (the central market) and the Mercury City Market in Donetsk. The self-styled de-facto authorities explain their move with the message that  the return of the markets to "state property" allows them "to reduce rents and liberate businesses from extortion, which they regularly experienced on the part of former market owners."

Hard life: everything is expensive and the choice is very poor

However, such statements are met with nothing but skepticism, especially when taking into account that there are still plenty of pro-Ukrainian citizens living in Donbas, who were simply unable to travel to other regions for different reasons. Among them is a resident of Torez in Donetsk region, Oksana (last name excluded for security reasons). The woman said the most difficult situation with regard to food was in the summer of 2014: "Stores were empty. Food trucks could not pass through the line of fire. Families began to bake bread, eat pickled vegetables which they produced themselves. They often cooked soup on an open fire as electricity was cut in the area. Warm clothing, identification documents and some cash were stacked in basements in case of shelling. People also prepared survival bags with enough food for the initial period (in case of a total fallout)."

The gradual decrease in the intensity of hostilities brought regular foodstuffs back to the stores. Today, "DPR" stores do not have a shortage anymore, but household chemicals, medicines and most food items are Russian-made. Clothing, however, remains a matter of concern, as it has become very expensive and the choice is rather poor.

According to local residents, along with the outbreak of hostilities, the prices have increased enormously. Just a year ago, the products in the “DPR” were several times more expensive than goods of a similar type in Ukraine, Oksana stated. Now, the prices are getting aligned.

At the same time, militants in the occupied territories set prices in the local stores in Russian rubles. But while the cost of products in rubles fluctuates against the hryvnia with a rate of 1:3 - 1:4, the wages people receive fluctuate at the rate of 1:2. In other words, people can buy only half of what they plan. These "wages" are applicable mostly for the “state employees” -- miners, teachers, medical workers and employees of public utility services, Oksana explained.

She added that it was difficult to live under occupation, because two years ago, talking about your pro-Ukrainian views could get you killed. "But over time, I changed my circle of friends, and a ‘pro-Ukrainian underground’ was formed,” she said.

Zakharchenko’s ratings head to a zero

In addition, Oksana believed that by the third summer of occupation, many people were waking up to the injustice, resulting in the authority of so-called “DPR leader” Alexander Zakharchenko nearing zero. This is also evidenced by the reaction of the locals to Zakharchenko’s statement on yet another delay in the "DPR elections" (from July 24 to October 30). "In what year will they actually take place? October 30 of what year?" is how annoyed locals reacted, adding that “Zakharchenko will continue his blah-blah about how bad Kyiv authorities are and about our imminent victory." Local netizens also express their outrage at the fact that Zakharchenko is trying to shift responsibility for economic problems to Ukraine and on the Minsk “conspiracy” on social networks. 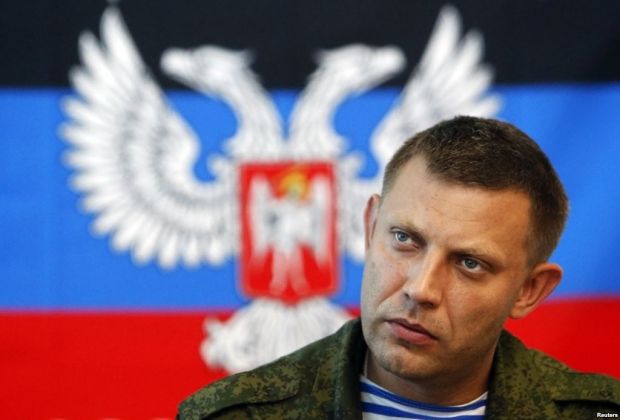 In fact, such "news" from the self-proclaimed leaders of the "DPR" gangs looks ridiculous, political analyst Vadym Karasyov, director of the Institute of Global Strategies, remarked. "There was this “war of nerve” between Ukraine, “DPR”-“LPR” and Russia around July 24 for local elections. They believed that by the end of the session the Verkhovna Rada of Ukraine would pass a law on the elections. That never happened. Therefore, it is clear that they lost this "war of nerves", and puppet authorities in the area are losing credibility,” he said. “This is starting to look laughable. On the one hand, they threaten Ukraine, but, on the other, they are forced to play our Ukrainian game. That’s because the postponement of the election date is a game according to our own rules, rather than by theirs."

On the one hand, they threaten Ukraine, but, on the other, they are forced to play our Ukrainian game.

Experts, however, believe that despite the increase in the potential for protest in the temporarily occupied areas of Donbas, "the fate of these areas depends on the long-term play of Russia."

Residents of occupied Donbas do not have any clue when the Kremlin’s master will have enough of this game. Indeed, people don’t speak of politics that much anymore. Politics changes, while people have just one life to live. Therefore, people seek simple things: to be able to buy some meat, some decent pants, go on vacation, and send their children to a good university.

In addition, according to the head of the Third Sector center, political scientist Andriy Zolotaryov, it is likely that the people of Donbas wanted the same simple things two years ago as well. Moreover, they could have it all. But, unfortunately, they haven't progressed because of their passivity.

"According to polls, there were fewer supporters of the “Russian world” in Donbas than, say, in Kharkiv. But the main drawback of the Donbas community was the fact that it was too passive. In fact, if we take into consideration the events of the spring of 2014, it was the active minority that was operating. The majority remained passive, and because of this stance, they are where they are now," he stated.

Zolotarev did not deny this: the population of the temporarily occupied territory is  getting increasingly nostalgic for the previous way of life. However, according to the expert, people are also getting used to living in a "gray zone". And this, according to him, gives reason to believe that Ukraine is losing these people. "The worst thing is that Ukraine is, in fact, losing these people. They are getting used to living in a "gray zone" between Russia and Ukraine. And while we haven’t lost the chance to regain territory over the past two years, it’s unclear whether we can "return" the people.

Perhaps, this is the main question.