Chornobyl NPP. Arch does not cover all problems

The fourth unit of the Chornobyl nuclear power plant has been covered with a new sarcophagus. A 36,000-tonne confinement will ensure 100 years of protection. But experts have warned - this is only the beginning of a big load of efforts to transform the Chornobyl zone, and plenty of challenges still lie ahead. 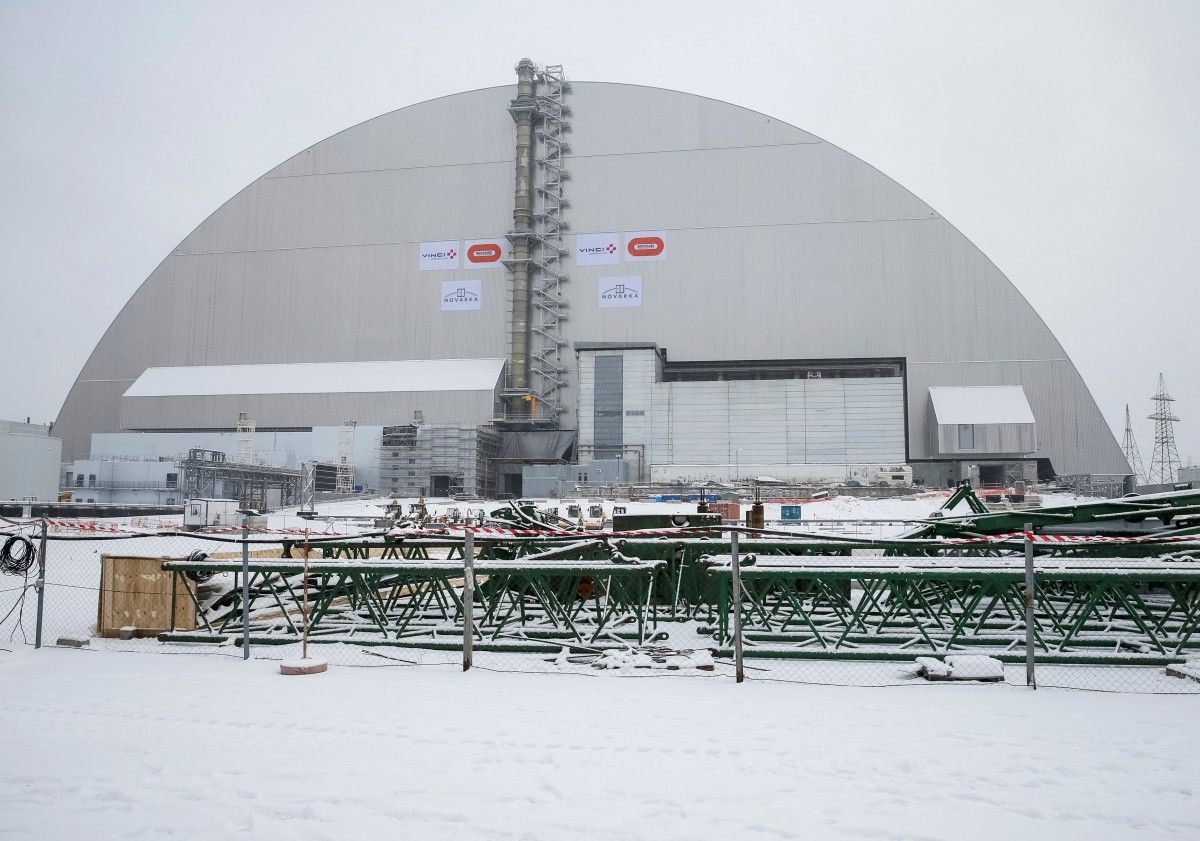 The fourth unit of the Chornobyl nuclear power plant, where the accident in 1986 became the largest man-made disaster  in human history, was covered by a new sarcophagus. Construction of the facility began in 2012, while the sliding the confinement over the unit (it had to overcome a distance of over 300 meters) took 15 days and was successfully completed on November 29.

The unique arch weighing over 36,000 tonnes will ensure the safety of a radioactive burial ground for the next 100 years.

Though being a grandiose success, this is only one of the stages of the Plan of conversion of the exclusion zone into a clean area, the implementation of which is financed from the Shelter Fund, founded in 1997 by the G7 (the United States, Italy, Germany, UK, Canada, France, and Japan). Then the idea of building a new sarcophagus was supported by the international community, when it was joined by more than 25 countries. In total, more than EUR 2 billion was raised over this period.

Finance Administrator of the Shelter Fund is the European Bank for Reconstruction and Development. In 1997, when the project Shelter-2 was launched, it was estimated at $550 million. Given the long period, the sum grew to EUR 1.5 billion. The rest of the more than EUR 2 billion went to infrastructure - building a new storage facility for spent nuclear fuel ISF-2 (able to accommodate more than 20,000 tonnes of fuel assemblies discharged from the Chornobyl nuclear power plant, with the shelf life of 100 years). The idea was to make it the largest confinement in Europe, as well as to build a plant for processing liquid radioactive waste. The so-called Arch was built by Novarka (a consortium of French-based Bouygues and Vinci construction companies). The facility is scheduled to be put into operation in November 2017 - after connecting and starting all the necessary systems and completing the sealing. Along with the Arch, there will be launched a repository, at least it is planned that way. The plant for processing liquid radioactive waste in the framework of the program for the NPP decommissioning has been in operation since 2015.

Meanwhile, a number of experts have already succumbed to criticism of the new confinement. Allegedly, the project is obsolete, its structure is weak and its operation will result in sky-high costs.

But there is another view. Director for the information support of the Association "Ukrainian Nuclear Forum" Ola Kosharnaya believes that the project is unique, the pace of its implementation is impressive, and most importantly – the Arch will be sealed tight. Most importantly, background radiation around the facility will be reduced, which is very important for the environment, according to the expert.

Former Chief Engineer of Pripyat installation management Viktor Hudym shares her point of view: "The Arch has been pulled - a very complex and serious work has been done, and the sarcophagus is now sealed. And inside, everything can be done that is planned,” he says, adding that a lot of work is still to be done.

The experts emphasize that the new sarcophagus is only 5% of the planned conversion of the Chornobyl zone.

Covering the 4th unit of the Chornobyl NPP is the only one of the stages of the transformation plan for the exclusion zone. It was approved by the Cabinet in 2001. According to the plan, after the commissioning of the Arch, cranes and other equipment must be installed inside, to dismantle the old sarcophagus, which has long lost stability and bears the risk for the new confinement (the old sarcophagus could simply collapse under the Arch, damaging it from the inside). Next everything needs to be removed from the "nuclear pit '- the space where there previously stood a reactor, and now there is a pile of radioactive" waste "and fused nuclear fuel. All the radioactive and toxic waste must be disposed of in accordance with the rules of radiation safety - only then will we be able to be calm, and the exclusion zone will be transformed. 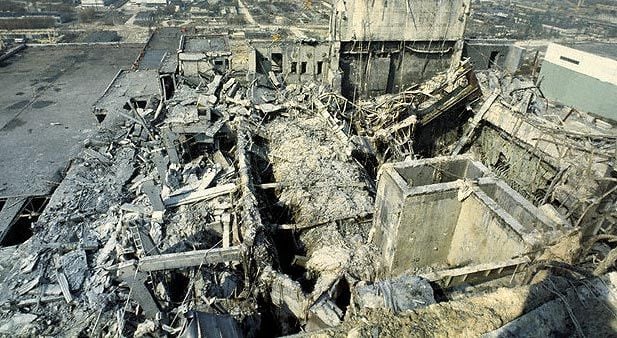 Destroyed 4th unit of the Chornobyl NPP after the 1986 accident / pripyt-chaes.ucoz.ru

The Shelter-2 project needed not the biggest investment in comparison with what remains to be done. Experts estimate that all the necessary work to clean up the territory of Chornobyl requires $100 billion. It is understood that these funds will not be utilized in one year, but still this amount is unaffordable for Ukraine.

"Ukraine will not cope with this alone, we need to now begin the process of raising funds now," said Kosharnaya.

Although in May 2016 the G7 leaders reaffirmed their readiness to cooperate with Ukraine in dealing with the aftermath of the Chornobyl disaster, our source close to the Chornobyl programs says no concrete agreements have been reached yet on how to fund the work on dismantling and recovering all that is now remaining in 4th unit. Moreover, with the completion of the construction of the new sarcophagus over the fourth unit the work of Shelter Fund with the European Bank for Reconstruction and Development ends.

Thus, questions remain about the implementation of other parallel projects. We are talking about Chernobyl infrastructure: ISF-2, the plant for processing nuclear waste, the storage of low- and medium-level active waste were paid for with donor funds of the Nuclear Safety Account. But Chornobyl zone conversion plan involves a larger infrastructure.

As Kosharnaya explained, the thing is that the ISF-2, which is under construction near the Chornobyl nuclear power plant, is a dry storage of spent fuel, intended solely for the fuel assemblies of Chornobyl NPP (from reactors that survived), and not for the rest of the radiation "junk", which is also a high-level waste.

For the latter, as noted by Kosharnaya, a different type of storage needs to be built – an underground geological storage in granitic rocks or salt mines.

"Either is it mines in granite, as in Finland and Sweden, or the salt mines, as in Germany. That is to say, very deep underground in special containers and mines. And mines are specially equipped to control the process. And the containers are not subject to extraction, they are buried forever. And Ukraine has not even begun siting. There were debates – either it is salt mines in Donbas, or granite rocks," said the expert.

According to her, even if the destroyed building of the unit and the old sarcophagus are dismantled, we will get a huge amount of radioactive waste of low and medium activity. For their burial, we have not enough sites. This is a big problem.

And one more thing: Chornobyl nuclear power plant should be removed from service - the body of three units must be disassembled, and everything needs to be put somewhere. The plant and storage facility, planned to be built within the framework of the conversion project, were designed just for this.

"But the main thing is that there are no technical developments as of how to remove the contents of the 4th unit. People cannot work there. Even in 100 years, the background radiation will virtually not be reduced - there is plutonium there, uranium-235, and radionuclides that emit neutrons with half-life of more than 2,500 years," said Kosharnaya. 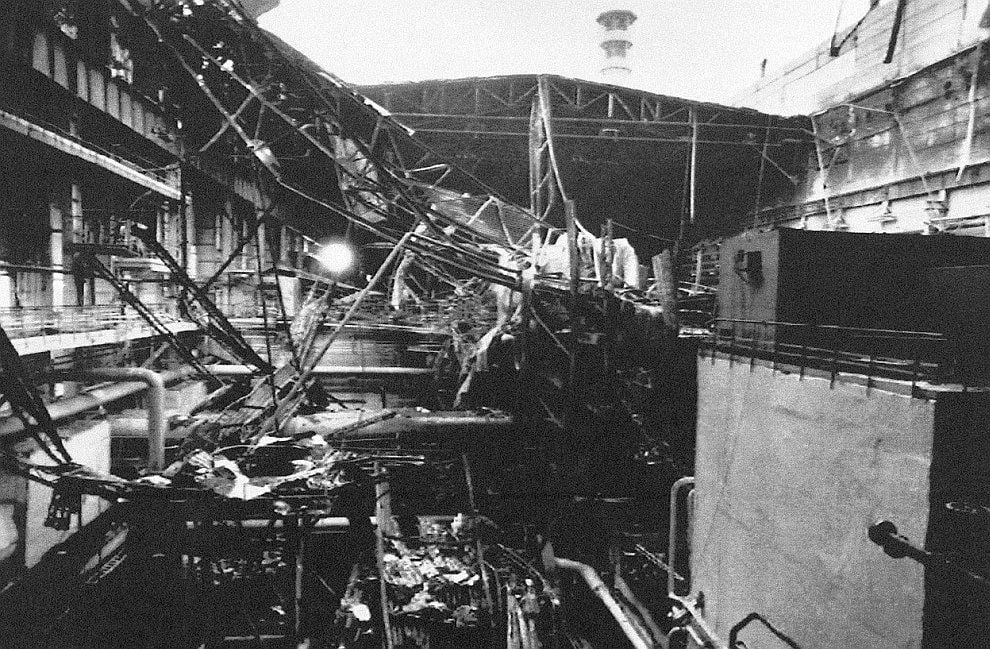 Part of the roof collapsed in the fourth block of the Chornobyl NPP, October 13, 1991 / livejournal.com

Hudyma also believes that talking today about the extraction  is premature, and there is nowhere to store the radioactive waste.

"Swedish and Japanese robots have failed in the accident - in that radioactive field, batteries just went dead. Wiring got burned. And the power unit is not a flat area, there are a lot of premises there. Thick 15cm wide doors. Everything can be tightly sealed, so how are we to enter? Processes are ongoing there, the radioactive gas radon is being released, a lot of things are going on. Besides a large amount of fuel, a lot of other waste is in there. There is some 500 tonnes of graphite. Moreover, that which initially melted at the time of the accident has turned solid. There are a lot of pipes and equipment under the old sarcophagus. And all this is radioactive. Just as the old sarcophagus. Where are we to bury all this? There is still a lot of work to be done. It will be costly, complicated and hard. It may take up to 100 years to clean this all up," said the expert.

It turns out that the Arch is just the beginning, and no one knows when we will come to the finish line. But one thing is clear - Ukraine must now resolve at the international level the issue of converting the Chornobyl site, the issue of financing this project. Otherwiseб the area will for another century remain a dangerous radioactive burial ground. And our grand-grand children will see in their dreams the clean green lawns in this beautiful area of Polissia.