Provocateurs from Russia: Have "Russian Spring" promoters been punished

The so-called Anti-Maidan rallies which swept across several regions of Ukraine in the spring of 2014 were for the most part organized and headed by the Kremlin agents, with some outright scumbags among them. Perhaps, the most notorious of them was the man with nom de guerre "Motorola," who eventually got blown up in an elevator in Donetsk.  UNIAN figured out the fate of his lower profile fellow thugs.

Crimea seizure gave start to a so-called Russian Spring, when a number of regions across Ukraine were covered with protests of the "Russian people" against "the Kyiv Junta." Mass rallies where the people chanted "Kharkiv (Odesa, Kherson - does not matter) is a Russian city" and waving Russian tricolors even allowed, for a while, to mask direct Russian aggression against Ukraine in Crimea. However, in numerous footages, where certain “activists” are seen hastily changing the yellow-blue Ukrainian banners on administrative buildings to Russian tricolors, these men bluntly state their country of origin. It is the Russian Federation.

Ukrainian journalists livestreamed from Donetsk, Dnipro (Dnipropetrovsk back then), Luhansk, Kharkiv, Odesa, showing the audience how "protesters" tried to storm local state administrations and  fly Russian flags over them. And while the "anti-fascist march" in Dnipro was almost comical, with a group of old communists roaming the city center with the flags of the Communist Party, the Soviet Union, and Russia, the Donetsk riot left no hope for a peaceful outcome amid chants praising Russia.

By the way, according to the SBU data, since February 2014, their investigative departments launched over 11,000 criminal proceedings into crimes against Ukraine’s national security and defense, encroachment on the country’s territorial integrity and inviolability. Out of more than 3,000 suspects, 112 were Russian citizens.

Despite Russian propaganda coverage of those protests showing pro-Russian Ukrainians taking to the streets, the masterminds behind most destructive operations and their most active participants were Russians. Indeed, some of them posed as "Ukrainian resistance," though both the locals and Ukrainian journalists would always tell a Russian disguised as a Ukrainian, due to a specific dialect or accent. Oblivious of some local peculiarities, the “guests” would sometimes blow their cover in a rather unexpected manner. Like that one time, “Kharkiv local protesters” stomped on a banner of the city’s acclaimed Metalist FC, which would be an insane thing to do for a real resident of Kharkiv, where the club is loved by everyone no matter political affiliation, according to an activist of the city’s Euromaidan movement Volodymyr Chistilin.

However, often the Russians did not even try to conceal their presence, grouping up amidst the crowd or openly boasting their criminal activities in social networks. For example, an "activist," who posted a Russian tricolor over the Kharkiv Regional State Administration during its first seizure on March 1, 2014 and boasted his “feat” in social networks, turned out to be a 25-year-old Muscovite Mika Ronkainen, who invited netizens to subscribe to his Instagram, saying that the pics "showing the seizure of the other administrative buildings across Ukraine will be right there." "I am proud that I was able to fly a Russian flag over the building of the liberated administration!" he wrote. 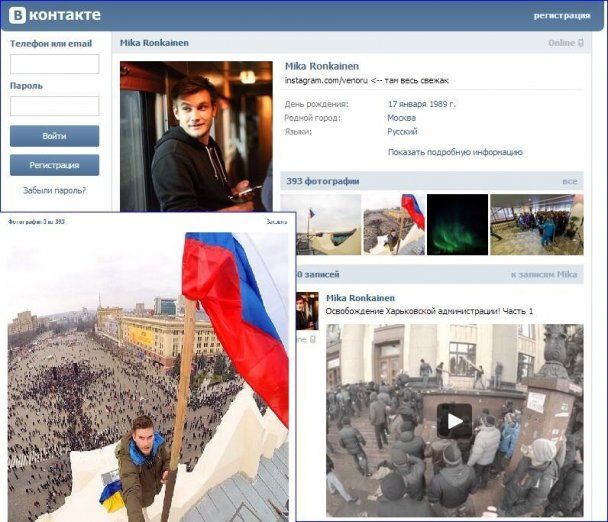 25-year-old Muscovite Mika Ronkainen flew a Russian tricolor over the Kharkiv Regional State Administration during its first seizure on March 1, 2014 ,and boasted his “feat” in social networks / glavred.info

Unfortunately, this promoter of the "Russian world" on a foreign soil still continues to post to social networks some beautiful pictures from across the world.

In the same days and the same place, in Kharkiv, another Russian citizen was spotted – Arsen Pavlov, later known in Ukraine as a Donbas militant "Motorola." In 2014, this former carwasher posed as a Kharkiv local, unhappy with "the Kyiv junta." In a video from a Kharkiv rally of the Russian world supporters in mid-March, "Motorola" is seen standing behind a man calling for Putin to send in his troops to this Ukrainian city. It was only later, when blank spots in Motorola’s CV gradually disappeared, it turned out that he had been part of a gang of Russia’s Igor Girkin (aka Strelkov). In about a month from that point, the gang seized the local administration of Slaviansk in Donetsk region.

Eventually, Motorola was blown up in a booby-trapped elevator in a militant stronghold of Donetsk.

Returning to the events in Odesa three years ago, we can’t but mention another active participant of the Anti-Maidan, a Russian citizen Larisa Chubarova, known by a nickname "Teresa." Back in 2014, she personally did not call for the overthrow of the government and did not seize the buildings of state bodies or weapons at police stations. But as early as 2015, she was detained by the Security Service of Ukraine on suspicion of plotting terrorist attacks in Kharkiv, in particular, blasting a central flag post on Pravdy Avenue. However, as of today, according to the SBU data, only one citizen of the Republic of Moldova, a citizen of the Federal Republic of Germany and 22 citizens of Ukraine have been convicted for subversive actions. Of them, only six Ukrainians are doing actual prison terms for their crimes.

At the same time, the Ukrainian prosecutors were also focused on "Teresa," revealing that since June 2014, Larisa Chubarova had been fighting on the "DPR" side and took part in torturing captured Ukrainian troops. And no matter how much "Teresa" denies any involvement in the crimes she has been charged with, the mere fact that she is on the list of those the militants seek to exchange for Ukrainian POWs (according to MP Nadiia Savchenko) speaks for itself.

That list also includes Teresa’s brothers in arms from Kharkiv Anti-Maidan Yegor Logvinov and Spartak Golovachyov, as well as a participant of the seizure of Kharkiv’s ATN TV channel, Russian journalist Sergei Yudaev who is desperately trying to play a role of a victim political repression. All of them are suspects in the case into the Kharkiv riots that took place April 6-8, 2014. 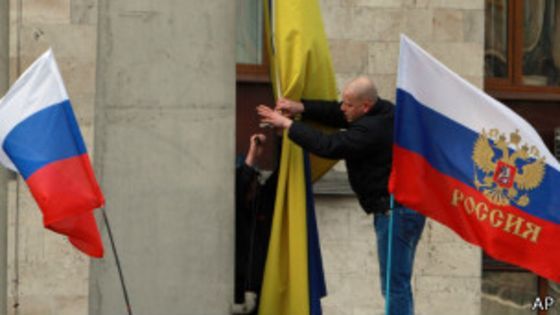 On April 6, the Kharkiv Regional State Administration has been invaded for the second time (simultaneously with the seizure of the Donetsk and Luhansk administrations). The tricolor was flown over the building, and the next day the invaders declared the founding of the "Kharkiv People's Republic." However, it didn’t last long. On the morning of April 8, the administrative building was liberated by the Vinnitsa-based "Jaguar" SWAT force.

In response to an UNIAN request, the Prosecutor General's Office reported that the case involves 68 suspects (two are wanted, while the files of the rest of them were forwarded to court).

September 13, 2016, following the relevant court decisions, Logvinov and Golovachyov were released on bail. Logvinov immediately tried to flee to Russia and was once again arrested. The trial continues.

Interestingly, that exchange list also includes two people involved in a "May 2 case" in Odesa - the citizens of the Russian Federation, Maxim Sakauov and Yevgeny Mefed, who call themselves "activists" of Kulikovo field. They came into a spotlight in regard with the first clashes between the "ultras" and Euromaidan activists on the one hand, and Anti-Maydan protesters on the other.

The tragedy of May 2, 2014, was the culmination of anti-Ukrainian riots in Odesa. 48 people were killed and some 300 were injured. Coordinator of the public commission "Group May 2" Tetiana Herasimova notes that the investigation team was formed of the investigators and prosecutors from different regions, but their effectiveness is highly questionable, and the judicial process is similar to "a farce." 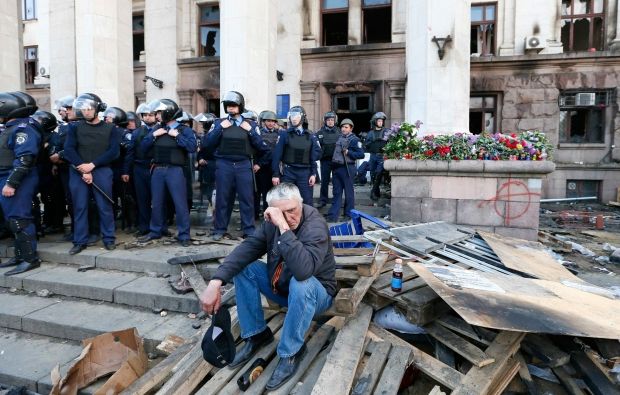 Of course, the investigation is still ongoing into the improper performance of law enforcers and possible involvement in the riots of Russian intelligence. In addition, the Main Military Prosecutor's Office conducts a pre-trial investigation into the negotiations of Sergei Glazyev, Russian presidential adviser, when he gave specific instructions to seize the building of the Odesa Regional Council, to declare the founding of the "Odesa People's Republic," to declare secession from Ukraine and seeking military assistance from Russia.

But those thugs from Russia, who pretended to be locals, it seems, should not worry too much. Even if Ukrainian courts hand down their verdicts, the militants fed by the Kremlin will keep insisting on their exchange. However, the unenviable fate of pro-Russian terrorists in Donbas shows that these Russian citizens should think hard about whether to agree to such a swap. They might as well be soon terminated, just like the notorious “Motorola.”