Right now the discussions regarding the creation of a Central Securities Depository are active in Ukraine again. Last week the two key participants of this process communicated their positions which were... 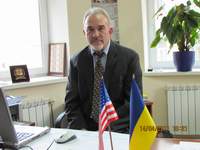 Right now the discussions regarding the creation of a Central Securities Depository are active in Ukraine again. Last week the two key participants of this process communicated their positions which were contradictory in many aspects. Trying to understand the events and versions of the creation of a Central Securities Depository in Ukraine, UNIAN talked to Robert D. Bond, Chief of Party, USAID Financial Sector Development Project (FINREP).

- Dr. Bond, does USAID support the creation of a CSD in Ukraine? What is your position?

You know that historically USAID and the World Bank have supported the creation of a Central Securities Depository (hereinafter, CSD) for Ukraine.  Their position is that the CSD should be majority private owned, and operate on the basis of international best practices. There are very few depositories which are completely owned by the state and it is an exception rather than a rule.

- For many years USAID provided assistance to the AUSD predecessor – MFS Depository, insisting that it would be more reasonable to create the CSD on the basis of this depository. Does the USAID’s position on this matter remain unchanged?

I don’t believe it has changed. Technically, a CSD formed on the basis of the AUSD, with the majority private ownership is certainly the best, most efficient, and least costly model, which is in line with the international best practices

- I would like to clarify a little bit, are you talking about the CSD creation on the basis of the AUSD or the NDU and the AUSD merger?

I was not involved in the discussions of the AUSD and the NDU merger and do not know the details of the negotiations. But typically in mergers the bigger company with the largest market share absorbs a smaller one. And since the AUSD occupies between 86% and 90% of the depository market it would seem that the AUSD is a logical choice for the creation of the CSD. Besides, the AUSD is 30% owned by the government already. I do not really understand why the Securities and Stock Market State Commission is insisting on the NDU as the CSD.

- If the SSMSC and the CabMin decide to create the CSD on the basis of the AUSD but require to increase the government influence on its operation through augmenting the state equity interest in the AUSD capital, what is the upper limit for the government stake? What does the international practice recommend in this regard?

There are only three countries in Europe whose central securities depository are either 100% or the majority owned by the state. They are Bulgaria, Malta and Cyprus.  Poland was among them, but at the end of last year Poland announced its intention to privatize the securities exchange and the depository. I do not think that Ukraine should follow the example of these three countries. There is more progressive experience available. Most of the developed countries like the USA, South Korea, Brazil, Mexico, and the majority of the EU member-countries have a CSD with the majority being owned by private companies. Even Russia has two depositories that are majority private owned.

- Advocates of the CSD creation on the basis of NDU refer to the experience of some European countries where the CSD is state owned. What do you think? Should Ukraine follow their experience?

Ownership structure is as follows:

Ownership structure for the central securities depository for corporate securities is as follows:

If the argument over which depository to choose as the basis of the merger is on technical parameters, or on the international best practices ground, or on the Ukrainian private market participation or sentiment, this is a very simple decision. It should be AUSD.

- What should the state role be in the depository services market?

I think I would refer you back to the Memo which Ukraine signed with the IMF. It is very clear on what the state role is in the depository creation.  Thus, Point 26 of the Memo says the following. “The participation of the state will include the creation of an effective relevant legal and regulatory framework and minimization of the use of public funds”.

- I would like to clarify two issues mentioned at the recent press-conference of the SSMSC Chairman Dmitriy Teveliev. In particular, he said that the National Depository of Ukraine is more ready to assume the record-keeping function than AUSD. Do you agree with this statement?

First, I would like to say that I have a great deal of respect for Chairman Teveliev as a specialist. He has been a strong supporter of our Project’s effort to implement the electronic system of information disclosure for public companies in Ukraine (ESCRIN). But I do not understand the basis for his conclusion on the depository issue. We did expert assessments of the depositories in Ukraine in 2006 and again in 2010, namely of the AUSD capacity to engage in its functions. And the conclusions were that MFS/AUSD met all relevant international standards for a depository. I am ready to make public our report on this issue. I would like to see the documentation from Chairman Teveliev that supports his position.

- Can you tell briefly about the assessment?

- The second point stated by SSMSC Chairman related to the possibility of segregating the depository functions: to assign the record-keeping function to one entity (NDU) and clearing and settlement function to another entity (AUSD). Is this segregation in line with international practices?

Unfortunately, it is not. What you find in the West over the last 5 to 7 years is an increasing consolidation of the infrastructure of the securities market, the reason being that it is more cost effective. Given the economy of scale with a significant volume of securities transactions, it will help consolidate back-office functions. Also, the consolidation of the depository, clearing and settlement functions contributes to the minimization of risks. It is much easier to control your risks if these functions are consolidated. And that is a trend in both the United States and European countries. The markets should compete up front, not with back office functions.

- What risks may arise if these functions are segregated?

You are adding another actor into the chain of the transfer of securities ownership.

The government’s actions in this case, in which they set up a committee that is primarily composed of government officials, members of Parliament, and an outside expert, speak to the lack of public-private dialogue  in Ukraine. Of course, the state should have brought this issue up for public discussion.

- What can be further actions by USAID? It was your organization as well as the World Bank and the IMF that stood for the establishment of a central depository based on AUSD?

I cannot speak on behalf of international financial agencies, but this is a poor decision of the government. I think that the decision has not been made based on technical grounds. What bothers me in this process the most is the lack of transparency.  I think that international organizations will jointly point out to the Government of Ukraine that this decision was a mistake, and try to persuade it to act on first principles: majority private ownership, least cost to the public, operations on international best practices.

- You mentioned that the Memorandum between Ukraine and the IMF states that a central depository should be in full compliance with international standards and practices, and the participation of the state should include only the creation of an affective regulatory framework. In this regard, does the attempt to establish a central depository based on NDU contradict the Memorandum? Can it complicate cooperation between Ukraine and the IMF?

Again, I cannot speak for the IMF. But the premise of your question is correct. The Government of Ukraine’s actions in this case are in contradiction to the signed Memorandum. The language about merging two existing depositories could only have referred to the AUSD and the NDU, not to the depository activity of the National Bank of Ukraine, as the government interprets it today. The Memorandum also talks about the minimization of the use of government funds.

So, as to whether it will complicate cooperation between Ukraine and the IMF, from my standpoint as an outside observer, the relationships between Ukraine and the IMF are becoming more distant. The current flashpoints have to do with pension reform, natural gas price increases, removal of other subsidies in the economy and other macroeconomic indicators. With regard to the depository issue, I do not understand why the Government of Ukraine wants to against international trends and best practices  on such an issue as a depository. All the more so, that the outcome of the establishment of a central depository based on AUSD would be to the benefit of the Ukrainian market and the country as a whole.

*"The views expressed in this article are not necessarily those of USAID or the U.S. Government."

The USAID Financial Sector Development Project is aimed to assist Ukraine in rebuilding from economic and financial crisis and in establishing an efficient, transparent, and sound financial system.

The Project provides technical assistance to legislative and regulatory authorities in bank recapitalization and rehabilitation  actions, supports the financial sector in implementing risk based supervision, regulating the private pension system, developing domestic securities market as a long-term source of capital, and assisting vulnerable groups of people with financial relief and financial literacy.

The goal of the Project is to develop a strong financial sector that will be regulated by politically and financially independent bodies, work based on the highest international standards and enjoy confidence of Ukrainian citizens. The Financial Sector Development Project coordinates its activities with other international donors.