"Well in the beginning they come as opponents... Daniel Craig is my favourite Bond... I`m going to be doing a lot of physical work... Everything hurts after that... I`ve tried a few weapons..."

Born in the Ukraine in 1979, Olga Kurylenko moved to Paris when she was 16 to pursue a career as a model and actress. Roles in Paris Je T`Aime, Le Serpent and videogame adaptation Hitman followed, leading to the part of Bond girl Camille in Quantum of Solace. IGN caught up with her on the film`s set last week to discuss weapons, stunts and the side effects of taking on such an iconic role.

Tell us a little bit about Camille.

Olga Kurylenko: She is a strong, feisty, independent woman. She is out there on her mission, driven by revenge.

How deep is her relationship with Bond?

Kurylenko: Well in the beginning they come as opponents, but at a certain point they have to collaborate. They go through a lot of things together.

How did you get the role?

Kurylenko: First I went for general casting in Paris, then I got invited for an audition in London, then I did the final audition with Daniel [Craig]. I just worked very hard. I worked non-stop with an accent coach because I have to speak with a South American accent, as she`s from Bolivia. 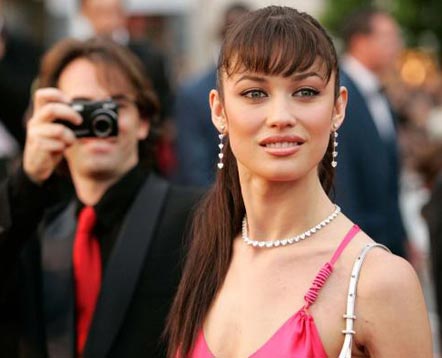 How has your life changed since landing this part?

Kurylenko: It has changed a lot. Overnight I became of interest to people, especially the press. I imagined that would happen because it`s a big movie, but you don`t really realise to what point. At the same time what disappointed me was there were quite a few lies in the press. I don`t know why people do that. I guess because they can`t get anything on me because nobody knows me, so I guess they just made up stuff.

What did you do when you heard you had the part?

Kurylenko: I was already at a dinner because it was Christmas Eve, so it was the best Christmas present.

Why did you want to be a Bond girl?

Kurylenko: Who doesn`t want to be a Bond girl? Doing Bond is an amazing experience – I`ve seen other Bond movies and I liked them. I loved the last one, and Daniel Craig is my favourite Bond. I was looking forward to participating – it`s got a great plot, great action, and they choose people really carefully. Now that I`ve got here I see that there`s a lot of preparation goes into it and it`s like a family. It`s an amazing experience.

Are you worried about being stereotyped as a Bond girl?

Kurylenko: I`m not worried about that because people that are around me professionally believe in me. And I have so many movie directors that are waiting in line to take me for their movies that have nothing to do with stereotypes – four of them are independent movies, and those are the ones I`m planning to do after this movie.

Would you have been happy playing a Bond girl in one of the older films?

Kurylenko: Yes, why not? I think some of them are pretty funny, but I`m just discovering them right now. I got this box of all the DVDs because I haven`t seen those from the 1960s.

In your opinion, what makes the perfect Bond girl?

So how physical is your role?

Kurylenko: I`m going to be doing a lot of physical work – there`s so much action involved. I haven`t had such heavy training for any other movie before. I`m training non-stop from the morning to the evening. I`m learning a lot of new things that I didn`t know how to do before.

What kind of skills have you learned?

Kurylenko: I do fighting, stunts for fight scenes, I do body-flight, which is very physical – everything hurts after that. You come out of the tunnel and your whole body hurts. Work with weapons, car driving – it`s a real action movie.

What weapons are you using?

Kurylenko: I`ve tried a few, but I hadn`t tried an automatic machine-gun before and that`s pretty impressive. But mainly guns.