A secret "DPR" prison opened in the summer of 2014. It hosted those whom pro-Russian forces sought to break down to get guilty pleas. Often, people would tell on themselves, giving up to torture. Despite the fact that the "DPR" doesn't recognize the very existence of this "concentration camp", it is still operating. UNIAN sat down with former inmates to hear their stories.

At a time when "regular coal miners" suddenly, in a matter of days, mastered the art of driving tanks or firing artillery (and also "dug up from mineshafts" all those munitions), the territory of a non-profit NGO Izoliatsia in Donetsk turned into... a secret prison. From June 2014, galleries and workshops, where art events, educational programs and projects revitalizing the Ukrainian creative society had earlier been held, turned into the cells of an actual concentration camp. There, the "DPR" forces held and tortured people, seeking to turn them into obedient puppets.

Donetsk occupation authorities don't formally recognize the existence of the secret prison, but those who survived this madness assure that the concentration camp is still operating. Over the past five years, hundreds of people passed through this "facility".

Valentina Buchok, 54, who is a Donetsk native, was accused of complicity in the assassination of a local warlord "Motorola". In fact, she just happened to be passing his house, when some terrorist suggested the woman was taking pictures on her cell phone. This was enough to throw Valentina in the cell. She spent eleven months in the dungeons of the secret prison.

Halyna Haievaya, 60, used to be a senior nurse in Dokuchaevsk, Donetsk region. Being a Ukrainian patriot, she was one of the activists in the region who informed Ukraine's security officials of the presence in the Ukrainian territories of those "who are not there" — the Russian military.

The pseudo-court in the "DPR" sentenced her for "espionage". Although no factual evidence was presented at hearings, the sham trial didn't really require any in the first place. Halyna was held in the cell for 15 months.

Both women were brought to Izoliatsia about three years ago. Then they were transferred to a Donetsk pre-trial detention center before they were finally released in December 2017 as part of a major swap effort.

Former prisoners of the “DPR” secret prison told UNIAN how the executioners electrocuted them, beat the captives with bats, raped former female militants, and even threw their chief to a basement for binge drinking

"They would put attach wires to people's toes, wet them and switch on power"

According to former prisoners, besides the fact that Izoliatsia's hangars were used as storage for weapons and ammunition (even a Russian tank was parked there) and seized cars, there was also a secret prison there with over a hundred inmates. The prison chief was a former staffer with one of the local penal colonies, Denis Pavlovich, call sign "Perviy" ["First" in Russian]. "He once said that he had quit service before the war, used to work in Kyiv, but then returned to Donetsk in 2014 and ended up heading the Izoliatsia. But they didn't hire random people there. Those people had to be experts..." Halyna Haieva begins the story.

And Valentyna Buchok completes the sentence for her: "... torture experts."

Women recall that their cell was located directly opposite the torture chamber. "I still remember the rattle of duct tape; they would tie people up with it. And then, until morning, we would hear screams. The most popular torture was electrocution. They would attach wires to people's toes, wet them, and switch on power. They tortured me like that, too," Halyna recalls. "The pain is excruciating. All muscles cramp up. And you lie there motionless, from head to toe, tied to a metal desk. Then they give you drops to return to consciousness. Then they bring tea and say: "See, we care about you'."

Besides such "care", a prison "doctor" could be involved – he was a Russian national, whom inmates called Coroner. A story told by Valentyna testifies to his "expertise": "I had drops from high pressure. They took it away from me, and once this 'doctor' gave them to our guards. Prescription allows up to five drops, while he told them to drink 30 drops. Their blood pressure dropped instantly – they barely made it till morning." 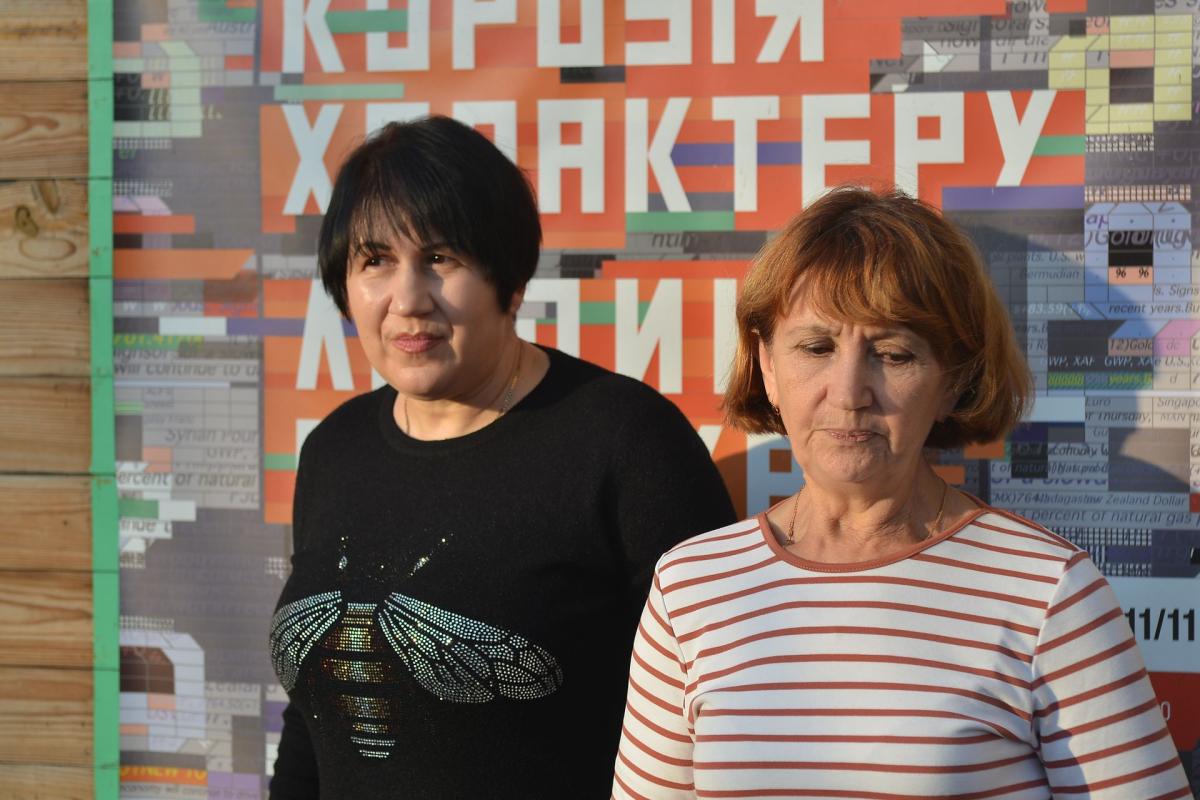 "They got somewhere memoirs World War 2 prisoners, where different kinds of torture in concentration camps were described," recalls Halyna.

"And they became their handbooks," Valentyna picks up.

In addition to electrocution, guards preferred bats: rubber, aluminum, and wooden ones.

"They would beat up the guys really bad. They'd put them on their knees and hit their heels. Then they would bring them to the cell and told force to stand still until morning, hands behind their back. Their heels swollen from the beating, they could only stand on their toes. If they moved, another hit at the ribs, under the ribs," Halyna recalls.

Women say cameras, which also recorded sound, were installed in all cells. Light wasn't turned off in the cells overnight. Guards didn't let inmates go to a bathroom normally...

"Kinds of torture varied. There was no toilet in the cells, only plastic bottles. And then the door would open: 'You have three minutes to do your thing.' Then some rush carrying bottles with urine, some grab empty ones to fill them with water, and some relieve themselves... And before that, we needed to agree with each other on whose turn is to go to the restroom and who could wait a bit more. Many times, you knock on the door and ask to go to the restroom and only hear in response: 'Carry your sh*t in your pants.' And we couldn't do anything about it," admits Valentyna.

"The attitude towards 'militants' was even worse than that towards us"

Our interlocutors note that their cellmates in Izoliatsia, young women, were being regularly raped. Ex-militants were being attacked the most.

"There were these two women, 'militants'. Remember, there were Zhilin's brigades, the Oplot? After he was assassinated, his soldiers were thrown to prisons. The attitude towards 'militants' was even worse than that towards us. They would throw them into a basement and wouldn't feed them," says Halyna.

Valentyna adds that even the "head" of the concentration camp couldn't be safe from the attacks of his own executioners: "Denis Palych once again got drunk, and an order came 'from higher offices' to throw him in the cell right there, in Izoliatsia. Then the guards went down there to the basement and beat him up so bad he couldn't stand up for a week. After that, he didn't drink for six months. Then he celebrated his birthday for more than a month. His supervisors were sick of this so they threw him into a 'glass' – a room that once used to be a shower, 2 by 2 meters. When I was taken to a pre-trial detention center in Donetsk, he uttered: 'You will leave and go home, while I have no other way'."

"Officially, the 'DPR' doesn't recognize that Izoliatsia is a concentration camp. It's a secret prison created by the 'MGB' to break down captives. It's a place where people can be held for years in complete isolation. I was held in a pre-trial detention center and wrote an appeal to their "law enforcement'; I had at least some kind of contact with the outer world. Nothing of this kind was possible in Izoliatsia. You couldn't have a cellphone or send a letter. You just vanished. And many vanished there quite literally: people were being killed there. There are hangars there with large pits. They would throw bodies there and cover them up with some garbage," she says.

Women say that over time the cells were "upgraded": utility pipes were laid, toilets and air conditioners were installed.

"Probably they're preparing the cells for themselves," Valentyna jokes gloomily. 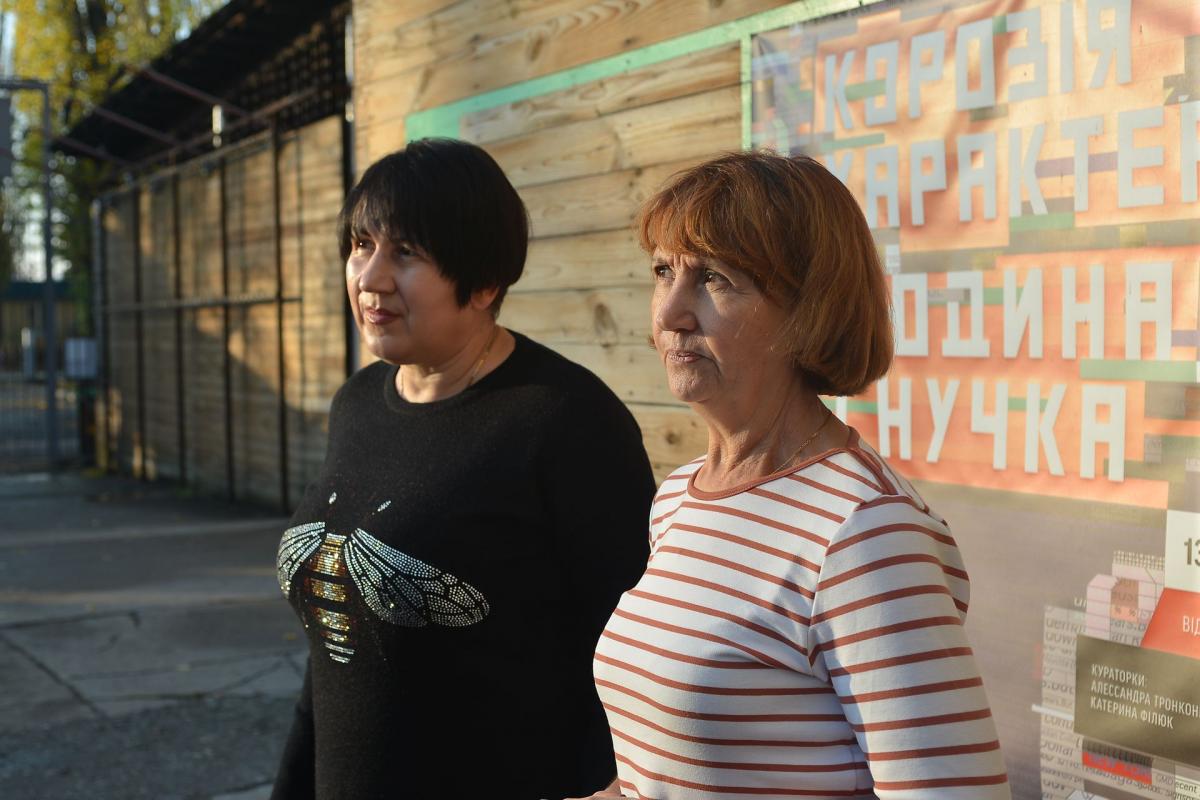 "They instructed them to 'work on me' to break me down"

From Izoliatsia, the women were transferred to the Donetsk pre-trial detention center. There was no physical torture, but psychological pressure never ceased. "Prisoners were told: 'We'll soon bring in an Ukrop [a derogatory term for pro-government Ukrainians].' They showed them a video about me. They instructed them to 'work on me' to break me down. And... I am a sociable person, and for two months there was no one to talk with. My cellmates would only be discussing ways to kill me. They would suggest either putting me in a sawmill or tearing off my skin and rubbing in salt," recalls Valentyna. "That one time I couldn't stand it anymore and said: 'Think about yourselves. I'll get out of here, and you'll have double homicide, and you will have a triple one…' And it stank so bad there. Cockroaches everywhere... From their bites, my foot was like an elephant's. I would wrap a towel around my face so that they couldn't crawl down my nostrils or mouth."

Naturally, life in prison had its consequences for those who went through custody.

"I have gastrointestinal issues. I underwent surgery and now I can't go anywhere without my pills," admits Valentyna.

Her friend tells me about another trouble. "My sleep has been messed up. To see nightmares, I first have to somehow fall asleep. Last night I couldn't sleep until three," says Halyna.

"Sometimes I wake up, feel the bed with my hands and wonder: Where am I: at a pre-trial detention center? At Izoliatsia?'," Valentyna says. "Most of all I feel sick of hearing 'Donbas residents are hostages.' After all, we, those who went through prisons, are not formally considered prisoners; we are 'hostages.' So I don't understand… are those who robbed us also 'hostages' like us? The accents must be put more clearly."

Former prisoners of the concentration camp are also outraged by the fact that their executioners might ultimately escape punishment. For example, "chairman of the CEC of the 'DPR'," Roman Lyagin, who was behind the transformation of the Izoliatsia Foundation’s premises in Donetsk into a secret torture prison, although he is now under investigation after he was detained in Kyiv this summer and charged with high treason), could evade responsibility. Human rights activist Olha Reshetilova claimed Lyagin went for a deal with the investigation, for which he could face a softer sentence or be pardoned. Such developments cannot be ruled out, given that the court hearing of his case has already been postponed several times. The next one is scheduled for December.