A major offensive by Russian-controlled forces on Ukrainian positions on the night of February 18 raises questions, whether Moscow really strives for peace in Donbas as much as it claims in the international arena. But why did the Kremlin need a new escalation in Donbas on the same day that Russia convened the UN Security Council?

At five in the morning on February 18, Zolote was rocked as if in an earthquake. Such devastating shelling hasn't been heard here since the beginning of war. Residents again were forced to rush into bomb shelters. Oleksandr Kishkinov confesses: he thought that after such a cannonade the invaders would try to seize the village. Had it not been for the response of Ukrainian troops, the enemy would have already been there.

Oleksandr feared that the "Russian World" would make its way to Zolote, but said that most of his neighbors had opposite feelings for the militants. According to him, ninety-nine percent of those living in the village are waiting for Russian passports and Putin.

"I tell many from our area that Putin's forces might come. And they say to me: 'Well, that's great! We'll get Russian passports'," he says.

It didn't take long to confirm Oleksandr's words. In ten minutes, a local old lady repeats – in pure Ukrainian language – the words she heard on TV.

"Are you waiting for Putin?" we ask.

"You, Ukrainians, have come to the East with such hatred! Putin… What does Putin have to do with all this?!" she responds indignantly.

"But he has deployed his troops," we continue.

"And haven't you, too? You have Georgians, Americans fighting along, You come to our land and start war here…" the old woman says.

"You say, 'yours'. Does this mean Ukraine is not your country?" we ask.

"It's you who came from the West and do your war here," she insists.

"East? What are you telling me?" the lady says, being confident in her words.

Immediately after the battle in Zolote, the enemy launched an infowar campaign. Hundreds of accounts in social network started spreading lies about the irreversible loss of the Ukrainian Army.

The messages go along the following lines: "The 72nd [brigade] was forced to retreat from five strongholds in Zolote, three KIAs, forces retreated to the town of Horske, leaving Zolote behind for separatists." 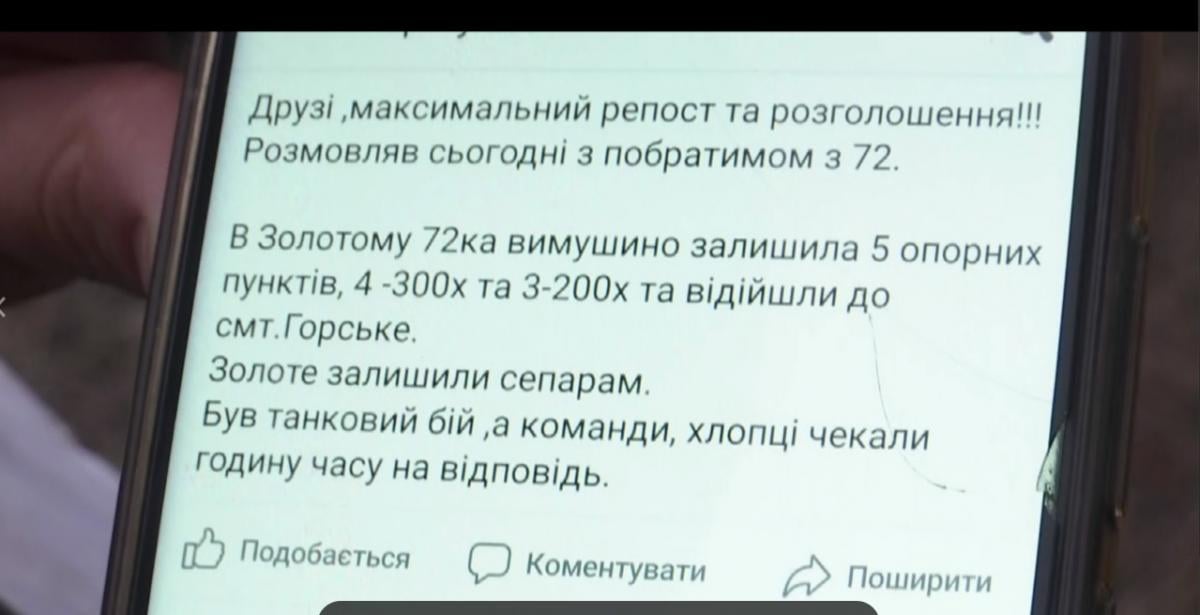 After the battle, the enemy started its infowar campain in social networks / snapshot

"Here it is, Zolote -4. We just arrived from there and we didn't see any separatists there, only looked into the eyes of calm and confident Ukrainian troops," Tsaplienko assures, reporting from the scene.

On this day, the whole world learned about the observation post, code-named "Bania" [Sauna]. "The battle unfolded at the observation post, the so-called Bania, manned by the 72nd Separate Mechanized Brigade... Accordingly, we returned fire, employing all weapons available," said Chief of General Staff Ruslan Khomchak.

The observation post, from where Ukrainians had to retreat, was set up just recently, in January 2020, in the area between the villages of Zolote, Orikhove and Novotoshkivske. Very close to enemy positions. Several lightly-armed fighters observed the enemy from the old, abandoned trenches, dug at the beginning of the war. One of those soldiers, Maksym Hitaylov, was killed in the battle. In addition to the Bania post, the enemy tried to break through in two more directions.

We are moving closer to the point where the enemy was covering his infantry with tanks. They arranged the so-called "tank carousel". As you know, a tank is a weapon used in an offensive breakthrough.

"The attack was planned as an offensive operation. Actually, that's what it was. The enemy struck with the artillery approaches to the Ukrainian positions. Next came the assault groups. And one more detail. From where we are driving now, along the vast stretch of the front line, the enemy used a smoke screen to prevent us from seeing them. This is a clear sign of the offensive. Of course, the decision to carry out such operations is taken at the strategic level, not by some militants," Andriy Tsaplienko says.

On the eighteenth of February, everyone, from the head of the General Staff to a simple gunner, understood who was on the other side.

"The enemy employed tanks and a smoke screen, which testifies to the fact that the operation was elaborately planned. Another sign is that there was a massive artillery fire ahead of the attack," says Andriy, a Ukrainian military.

The left flank of the enemy operation is Popasna. Russian shells plowed the local cemetery. As if they wanted to destroy the memory of those who lay here. Our soldiers search for what's left of enemy ordnance. If you are lucky, you will be able to figure out a projectile manufacturer: "Here is the nose part where. Here is an extension … 'Made in Russia'."

And here's the right flank. Not far from the village of Krymske. Yaroslav, the fighter we're talking to, is celebrating his second Birthday. A mine exploded three meters from him, but he didn't have a scratch.

"Adrenaline and joy. What else? If you're going to die, do it with a smile, right?" he shares his impressions.

Now Yaroslav is ready to share the excess adrenaline: "It can't be explained in words. This is like some high speed chase adrenaline – you don't know what will happen to you."

Now imagine this. There are almost forty kilometers of front line between Krymske and Popasna. And the enemy launched tonnes of ammunition of all areas across this whole area within hours. The Ukrainians lost one soldier and was forced to retreat from one of its observation posts. 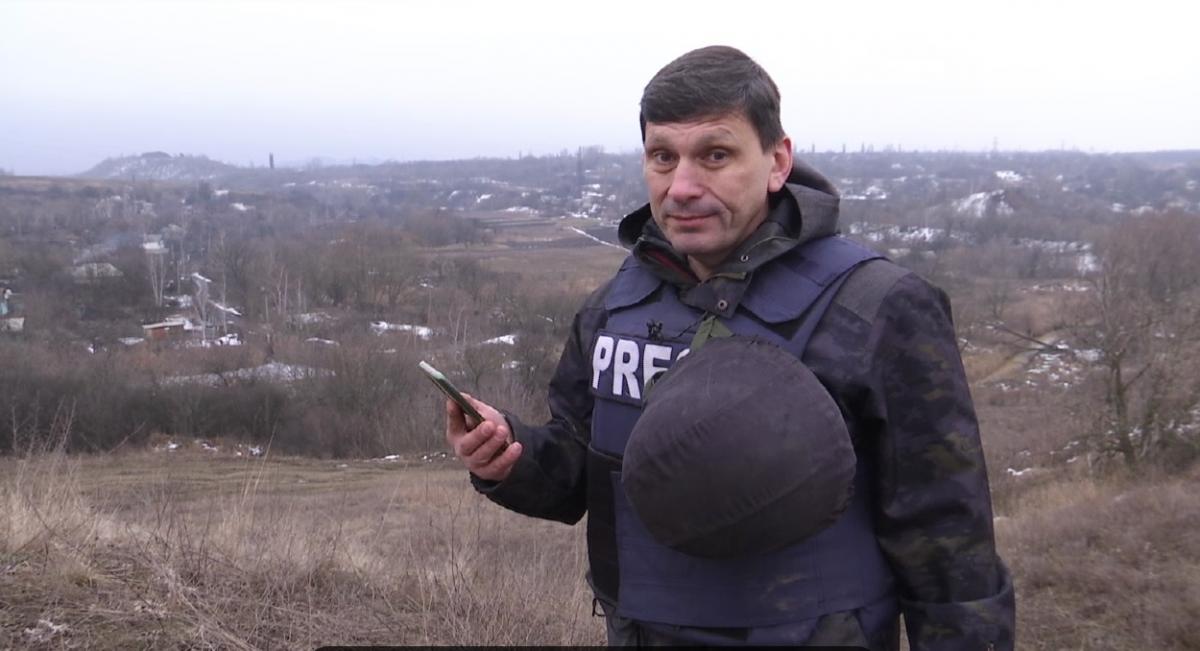 The Russian attack was already hotly debated in New York that same evening, at the UN Security Council meeting. But it was precisely Russia that asked for that meeting ... back on February 12, around the time when – it was already evident – an offensive on Ukrainian positions was being plotted.

The fact is that the attack in Zolote is only a small element of the global game led by Moscow. It is likely that Russia is shifting the attention of the eternally concerned United Nations to Ukraine so that they do not notice the crimes elsewhere in the world. Like, in Syria. Why not?

As the UNSC was debating on the Ukrainian war, dozens of people were being killed in Syria by Russian air force and the Syrian troops with Russian generals behind their backs were shooting at soldiers of the Turkish army. Some even talked about a new Russian-Turkish war. And the Russians had to avoid it – just a half-step before gaining full control of Syria.

In preparation for the offensive on Idlib and the inevitable confrontation with Turkey, the Russians occupied key positions along the Turkish-Syrian border.

"Beyond Qamishli, the capital of Syrian Kurds, lies the Turkish territory. Multi-storey apartment blocks just several hundred meters away are part of Turkey. And we were informed that right now we are under the close control of Turkish snipers," Andriy Tsaplienko reports from East Syria.

This is the main Russian base here. And here they even tried to apprehend the camera crew as they were filming a Russian military patrol. As soon as the Russians will force Turkey to give up their interests in Syria, Moscow will move even further – to try to remove the Americans from the region.

"Russian mobile patrols are moving deep into the Kurdish territory. It's like an inconspicuous creeping offensive. Its goal is to gain control of the oil fields, where black gold is pumping along the roads, immediately turned into real money. The only force that prevents the Russians from implementing their plan is the U.S. military," Tsaplienko says.

If the tricolor banner flies above the local oil fields, the "Russian World" may claim a win in Syria. And after the victory – which Moscow is so close to – it will release its military resources and be able to tighten its grip on Ukraine.

Intelligence reports: invaders might try to penetrate Ukrainian defense lines in another area. At the front line, Ukraine is once again preparing for another escalation.